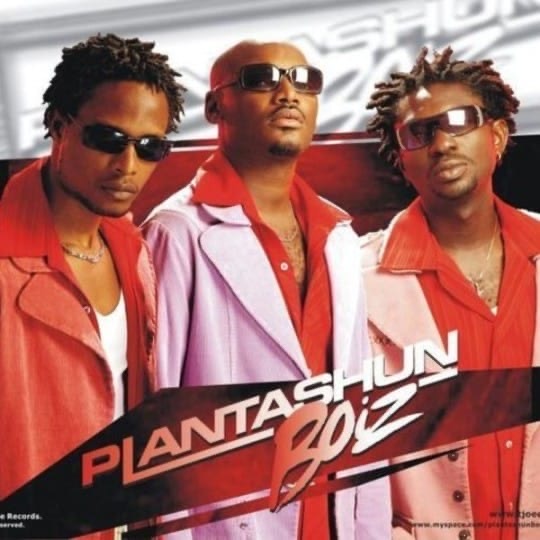 Defunct Plantashun Boiz music group, made up of 2face, Blackface and Faze, have put their differences aside and reunited to honor their late friend, Sound Sultan, after their breakup over 10 years ago.

A Night of Tribute took place on Saturday, July 24 in Lagos state for Sound Sultan and friends, celebrities, and fans were present to honor the legendary singer. who passed on July 11 after long battle with lymphoma.

One of the highlights of the event was when members of the defunct Plantashun Boiz reunited years after feud.

Their split up in 2004 was one of the biggest in the music industry back then, leading to individual members of the group leaving to sign solo deals with record labels.

Read Also: Plantashun Boiz Broke Up Because Other Members Were Selfish – Black Face

After their split, Blackface repeatedly accused 2baba of stealing his song, insisting he wrote African Queen.

He also accused the ‘African Queen’ crooner of being gay, alleging that 2face engaged in same-sex intercourse as a sacrifice for his success.

However, it seems the long term beef ended on Sunday night after Sound Sultan’s older brother, Baba Dee while speaking about his brother urged members of the defunct Plantashun Boiz group to make peace while they’re alive, as life can be fleeting.

He advised them to act in the spirit of forgiveness, oneness, love, and all that Sound Sultan represents.

The defunct group took his advice and made peace by performing one of their hit songs ‘Plantashun Boiz’ and a tribute song to Sound Sultan.

At some point during the night, all three men hugged each other on stage, putting over a decade of animosity aside.

Other artists also paid tribute to the music star at the event which held at Terra Kulture, Lagos state.

Watch videos of the trio reuniting below;