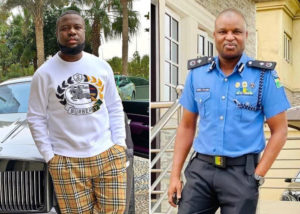 Federal authorities in the U.S. have been investigating Hushpuppi, 46, and his co-conspirators after their syndicate was busted in Dubai, New York and other top cities last June.

Read Also: Hushpuppi, Woodberry And Others Allegedly Arrested By Interpol In Dubai

According to the court document shared on the official website of US Department of Justice, Hushpuppi disclosed during interrogation that he paid bribe to Kyari, a deputy police commissioner, to have one of his rivals arrested and jailed in Nigeria following a dispute over a $1.1 million scam (N583,300,000) of a Qatari businessperson.

Officials stated that Hushpuppi was involved in an elaborate scheme to steal more than $1.1 million from a businessperson attempting to finance the construction of a school for children in Qatar.

The defendants allegedly faked the financing of a Qatari school by playing the roles of bank officials and creating a bogus website in a scheme that also bribed a foreign official to keep the elaborate pretense going after the victim was tipped off.

According to the indictment, Abbas allegedly conspired with Abdulrahman Imraan Juma, a.k.a. “Abdul,” 28, of Kenya, and Kelly Chibuzo Vincent, 40, of Nigeria, to defraud the Qatari businessperson by claiming to be consultants and bankers who could facilitate a loan to finance construction of the planned school.

Juma allegedly posed as a facilitator and consultant for the illusory bank loans, while Abbas played the role of “Malik,” a Wells Fargo banker in New York, according to court documents. Vincent, in turn, allegedly provided support for the false narratives fed to the victim by, among other things, creating bogus documents and arranging for the creation of a fake bank website and phone banking line.

Yusuf Adekinka Anifowoshe, a.k.a. “AJ,” 26, of Brooklyn, New York, allegedly played a role in the fraud, assisting Abbas with a call to the victim posing as “Malik.” Special agents with the FBI arrested Anifowoshe in New York on July 22.

Following this, court documents revealed that a dispute broke out among members of the conspiracy, which allegedly prompted Vincent to contact the victim and top the person off about the fraud, mentioning Hushpuppi and Juma.

Angered by this, Hushpuppi asked DCP Abba Kyari to arrest and jail Vincent.  Following this, Kyari sent pictures of Vincent in jail and subsequently sent Hushpuppi bank account number to which a wire transfer should be made having done a good job as sent by Hushpuppi.

According to the affidavit, Kyari is a highly decorated deputy commissioner of the Nigeria Police Force who is alleged to have arranged for Vincent to be arrested and jailed at Abbas’ behest, and then sent Abbas photographs of Vincent after his arrest. Kyari also allegedly sent Abbas bank account details for an account into which Abbas could deposit payment for Vincent’s arrest and imprisonment.

Kyari has long grabbed media accolades as a no-nonsense cop who brought sanity to violent but lucrative crimes in Nigeria, including kidnapping and armed banditry.

He received an accelerated promotion for his exploits. But critics have repeatedly warned that his tactics had become increasingly brutal, opaque and corrupt.

Meanwhile, the court document was published after Hushpuppi pleaded guilty to multimillion-dollar fraud earlier this month and faces up to 20 years in jail.

He will be sentenced in the coming weeks and will forfeit some of his assets and his rights to appeal while also paying restitution to victims of his years-long fraud.