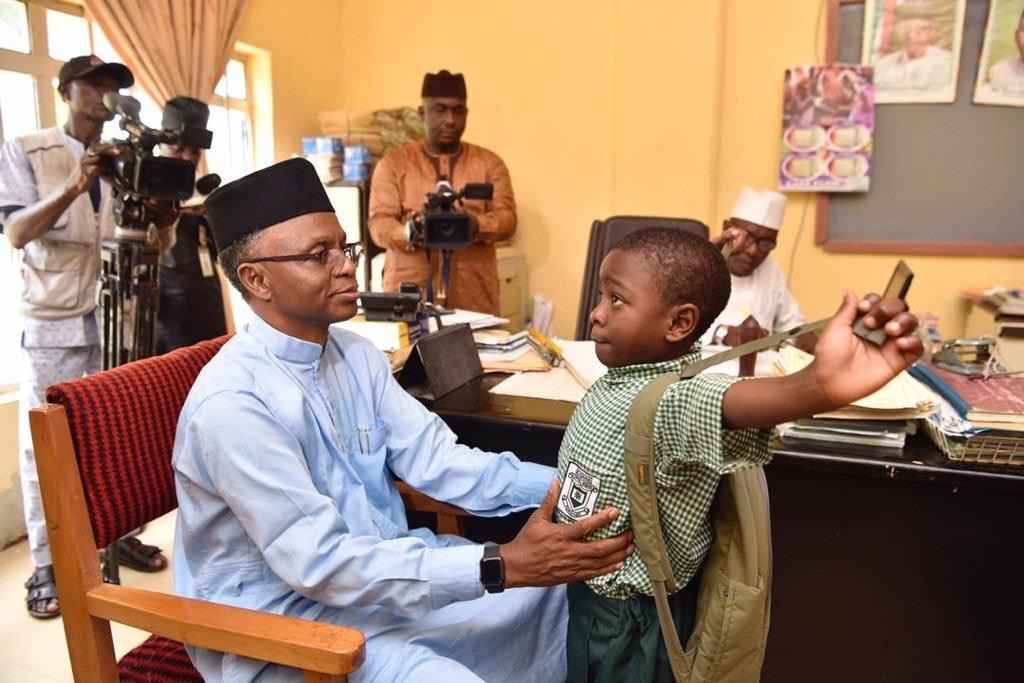 El-Rufai who enrolled the boy into the school in September 2019, had said he made the move to fulfil the promise he made in 2017.

In December 2017, the governor had in a state broadcast promised to enroll his child in a public school when he turns six years.

Last year, the Governor dramatically enrolled him in one of northern Nigeria’s oldest public schools.

However, according to Daily Trust, the boy has stopped going to the school.

A teacher in the school disclosed to the newspaper that the governor’s son has not been coming to school since the COVID-19 lockdown was lifted last year.

We used to see him when he was newly enrolled in the school, but we no longer saw him after the COVID-19 lockdown was lifted late last year and we don’t know why.

Many Nigerians have described the governor’s enrolment of his son in a public school as a political and media stunt aimed at giving the impression that he is like the ordinary people of his state.

However, in an interview with BBC Pidgin, El-Rufai said his son had been targeted by bandits because of the governor’s public stand against the payment of ransom.

El-Rufai, who has come under fire by residents who accused him of enrolling his son in public school for political gain, said his action was not politically motivated.

We believe in leading by example, we believe in whatever policy we propose that will affect people negatively, we start imposing it on us.

He added that his daughter, Nesrin, was also enrolled in the school when she turned six.

El Rufai said even though there was no threat to Nesrin, both children were removed from the school on the advice of security agencies.

My son and my daughter are registered in the school because his sister became six and we had to register her.

But we have had to temporarily withdraw them for the security of the school because we got intercepts from at least two groups that are planning to attack the school to kidnap my son.

I don’t think they will succeed because there will be enough security there to prevent it but other children may be placed in danger. We have no idea what weapons they will come with. I have taken a stand against paying bandits and at least three groups of bandits have been intercepted planning to go to Kaduna Capital school and kidnap my son and ‘see if they catch my son, I go say I no go pay ransom?’.

He assured that his decision was purely based on the safety of other children in the school, adding that he had enrolled his son in the school to prove to the people of Kaduna State that he had enough confidence in the public-school system and stressed that he intends to keep the promise.

He expressed young El-Rufai misses the school, adding that;

He keeps asking, ‘Baba, when will I go back to school, I miss my friends, I miss my teachers’ I told him not yet, you can’t tell a seven-year-old you are likely to be kidnapped.

It is my intention that my children will be in public school as long as I am governor here. Of course, when I finish my term, I will move out. I intend to leave Kaduna when I finish. I am not going to stay here. I may explore other options of putting them in other schools.

The Governor explained that his son, who is still registered with the school and goes to take his exams, is now being home-schooled.

He assured that as long as there is reasonable confidence that his attendance will not put the school at risk, both children will return there.