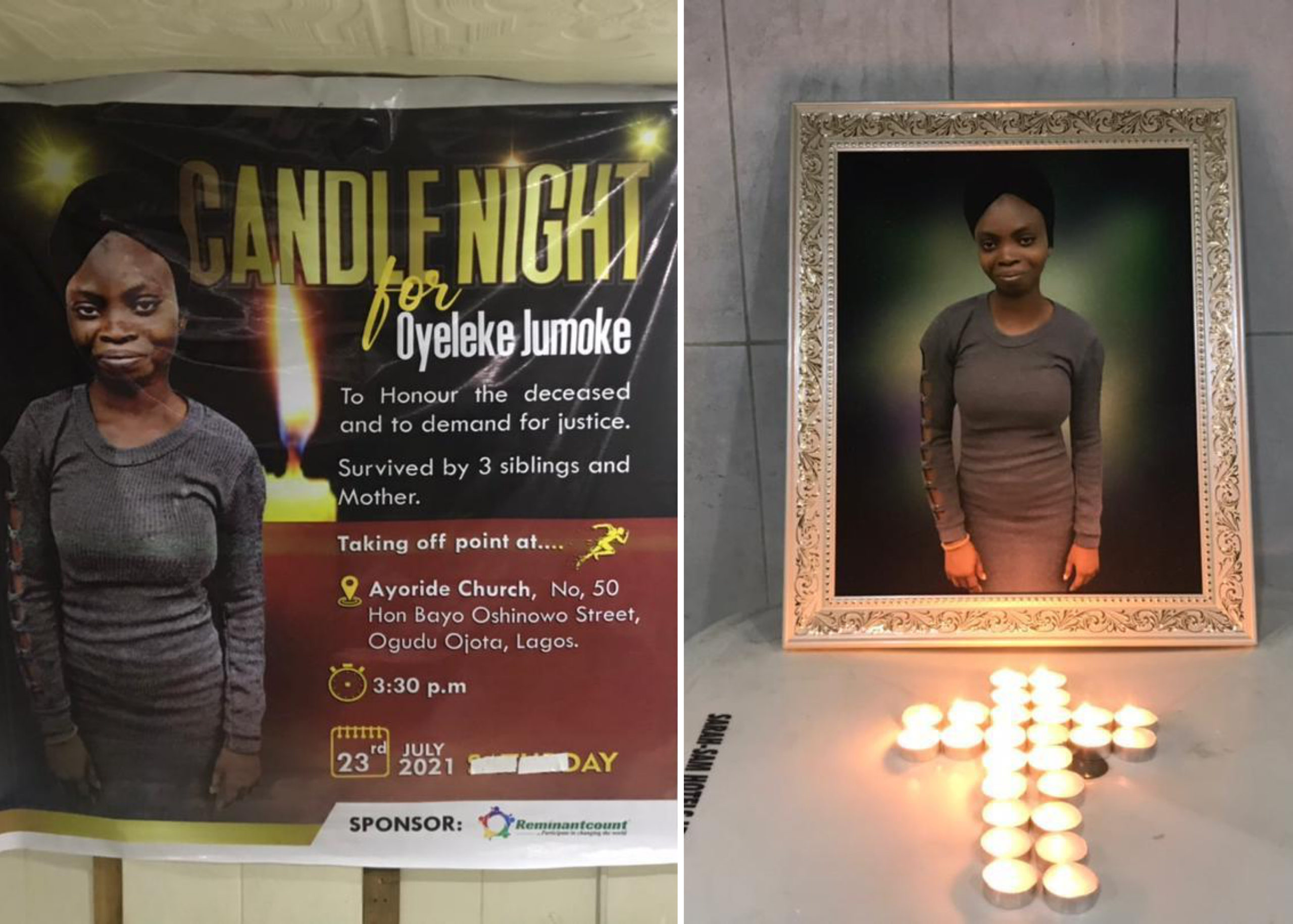 Candle night procession for Jumoke Oyeleke, the 25-year-old salesgirl that was recently killed by stray bullet, held on Friday, July 24 at a church in Ojota, Lagos state.

Recall that officials of Lagos police command had attempted to disperse the peaceful rally at Gani Fawehnimi Freedom Park in Ojota on July 3 by firing guns and tear gas canisters into the air.

Witnesses at the rally claimed the deceased was hit in the back as she, alongside others, was fleeing from the scene of the police shootings.

However, the police swiftly issued a statement saying its officers never fired a “single live bullet” at the rally.

According to the statement, the deceased’s body “was found wrapped and abandoned at a distance, far from Ojota venue of the rally, behind MRS Filling Station, inward Maryland, on the other side of the venue, with dried blood stains suggesting that the corpse is not fresh. After a close look at the corpse, a wound suspectedly sustained from a sharp object was seen on it.”

Following this, Lagos state government ordered an investigation into the alleged killing of the young lady.

However, autopsy contradicts the claim by Lagos State Police Public Relations Officer, Muyiwa Adejobi, that Jumoke was abandoned after she might have been stabbed.

The report which was signed by one Dr. S.S. Soyomiof Department of Pathology and Forensic of Lagos State Teaching Hospital (LASUTH) in Ikeja, indicated that the 25-year-old died from “haemopericardium, disruption of the heart and lungs and missile injury to the chest.”

Hemopericardium refers to blood in the pericardial sac of the heart. It is clinically similar to pericardial effusion, and, depending on the volume and rapidity with which it develops, may cause cardiac tamponade.

Meanwhile, the candle night procession sponsored charity organisation, Remnant Count, with family members of the deceased present was organised to honour the young lady and demand for justice.

The deceased is survived by her distraught mother and three siblings.

Eulogies and tributes poured from attendees who spoke of Jumoke’s calm and gentle manner.

One of the speakers at the event was a human rights activist, identified as Dabira, who had stayed close to the family since the incident.

Jumoke was not a protester, Jumoke was not an activist. She was just a girl that was struggling to ensure that food was put on the table of her three siblings and her sick mom.

A former neighbour of the deceased described Jumoke as a passionate person.

Amid tears, her younger sister, Olaitan, explained how Jumoke used to help the family financially, cook for them and see to their needs.

Jumoke’s immediate younger sister also narrated how her elder sister promised to organise a birthday party for her before her untimely demise.

Amid tears and mourning, the family and friends, holding lighted candles, rendered sorrowful songs in her remembrance.

Single Mother Explains Why She ‘Makes Love’ To Her Son (VIDEO)