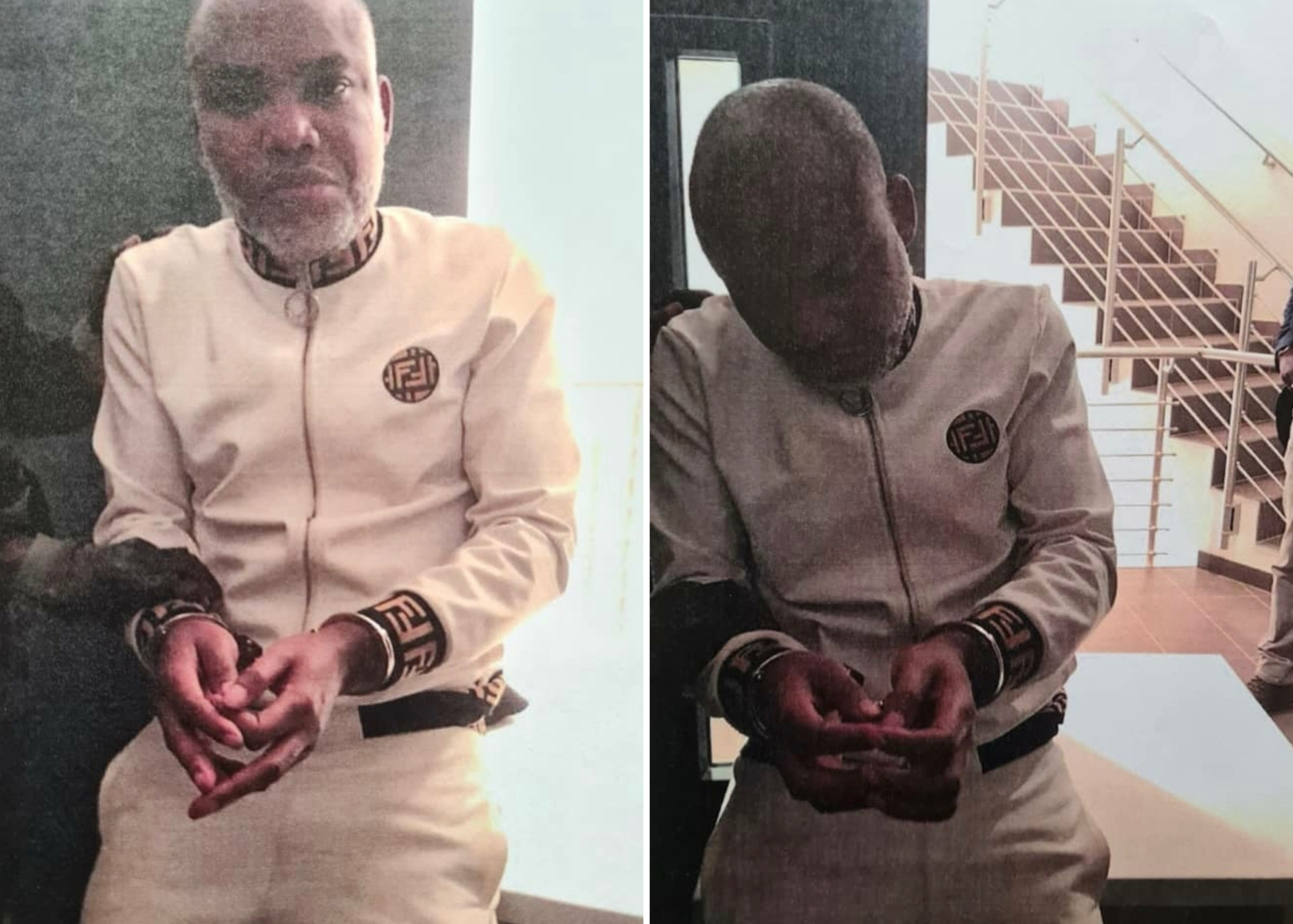 Mixed reactions have trailed the arrest and extradition of Indigenous People of Biafra (IPOB), Nnamdi Kanu.

MDB earlier reported that Kanu is facing charges bordering on treasonable felony instituted against him at the court in response to years of campaign for IPOB.

He was granted bail in April 2017 for health reasons but skipped bail after flouting some of the conditions given to him by the court.

However, Federal Government on Tuesday announced his arrest and extradition to Nigeria to continue facing trial.

Kanu was arrested by a combined team of Nigerian and foreign security agents in a coordinated interception.

Attorney-General of the Federation and Minister of Justice, Abubakar Malami, SAN, announced the latest development on Tuesday, at an emergency media briefing in his office confirmed the arrest of Kanu.

Following his arrival in Nigeria, Federal High Court on Tuesday ordered the remand of Kanu in the custody of Department of State Services (DSS) till July 26 for continuation of his trial.

Reacting, some Nigerians on social media said the arrest will end the activities of IPOB and ESN, others believe that it may lead to a renewed tension in the South East while a sect of people slammed the Federal Government for refusing to deal with banditry in the country with the same tactic.

The federal government can go through the pain and diplomatic brouhaha to arrest Nnamdi Kanu abroad, but couldn’t find Abubakar Shekau who was in Nigeria for over 6 years.

The arrest of Mazi Nnamdi Kanu just confirms one thing: The Buhari Government has all the resources needed to arrest those behind kidnapping, banditry and terrorism in Nigeria. They know exactly where they are and how to get them. But like TY Danjuma said, THEY COLLUDE!!

Hmmm….
Nnamdi Kanu Arrested…
If this is true then
I pray our Country remains stable because …..
I fear for the days ahead

Of course, rather than transparently prove the criminal acts alleged against Nnamdi Kanu through A FAIR TRIAL, the Buhari govt is more likely to turn this into a lawless victory parade against an “enemy leader” that will only deepen ethnic tensions and seal his status as a hero.

FG may have NNAMDI KANU in their custody, but Nigeria don’t belong to them. Until they start treating all Nigerians equals, more NNAMDI KANU will spring up from some parts of the country. Less i forget, FG declared TOMPOLO wanted, but he recently held a meeting with Akpabio.

Like I said before, you can arrest Mazi Nnamdi Kanu heck even kill him but you cannot kill the idea; “BIAFRA”.

Take him out and two more will replace him, the common Igbo man is now so disillusioned with ‘One Nigeria’, it’s not about MNK anymore.

Sunday igboho when he hears about Nnamdi kanu’s capture…
Boys scout are coming for you😉 pic.twitter.com/LKeSlCurOq

Lmao so fg can go to the Uk to pick up nnamdi kanu and somehow fail to add diezani to the cart? Just how??! Naija is all cruise lol 😩

I have to be careful about how I word this, but assuming Nnamdi Kanu was indeed extradited or arrested with international help, I want to know under what legal framework this happened.

I get that he’s persona non grata in Nigeria, but who gave him up and why?

The biggest mistake the Nigerian Government will do is let Mazi Nnamdi Kanu die in their custody. History has shown us that it never ends well.

If he has committed any crime against the Nigerian state, allow him access to a lawyer and fair hearing in court.

Now that Buhari has arrested Nnamdi Kanu I hope we have our Twitter back on time. Lai Mohammed once said Twitter failed to delete Kanu’s tweet but rushed to delete Buhari’s tweet. Also now that Kanu has been arrested, I hope we are going to have peace in Borno and Zamfara.

This smells of Umaru Dikko.

Buhari did not change one bit.

They will probably execute Nnamdi Kanu in circumstances similar to a military junta.

I wish govt has the same resources to capture bandits WITHIN Nigeria.

Sani Abacha said & I quote; “any Insurgency that lasts more than 24hrs, government officials have a hand in it.”

Nnamdi Kanu’s arrest confirms that the Buhari regime can be swift, decisive and methodical when it is motivated – usually by ethnic or religious sentiments.

Now let his trial and his detention be in full compliance with the Rule of Law.

Nnamdi Kanu Arrested and extradited to Nigeria. You figure they’d hold him for long this time. Videos of him soliciting for arms against Nigeria and subsequently setting up ESN won’t help his case at all. Really hope FG respect human rights in their dealings

FG did everything possible to rearrest Nnamdi Kanu who is not living in Nigeria but a terrorist group had to help them kill Shekau that’s living amongst us, someone they claim to have killed 300 times. This administration is shameless.

The federal government of Nigeria has made Nnamdi Kanu a matyr of the Igbo Nation for the way he has been arrested and brought back to Nigeria.The agitation for the emancipation of Biafra will take a very dangerous dimension. One thing is certain, Nigeria will break.

It requires a lot of diplomacy and technicalities to arrest someone in a foreign land.Nigeria went through all that to arrest Nnamdi Kanu of IPOB yet Boko Haram,bandits & killer herdsmen have been terrorizing us for eternity and we can’t arrest them.The truth is so glaring

The couldn’t arrest Shekau who was hiding in Sambisa for years. Sheikh Abubakar Gumi is still walking freely with bandits, granting interviews, and asking for millions of Naira & amnesty for terrorists, meanwhile, they went all the way to UK to arrest Nnamdi Kanu. One Nigeria. 👌