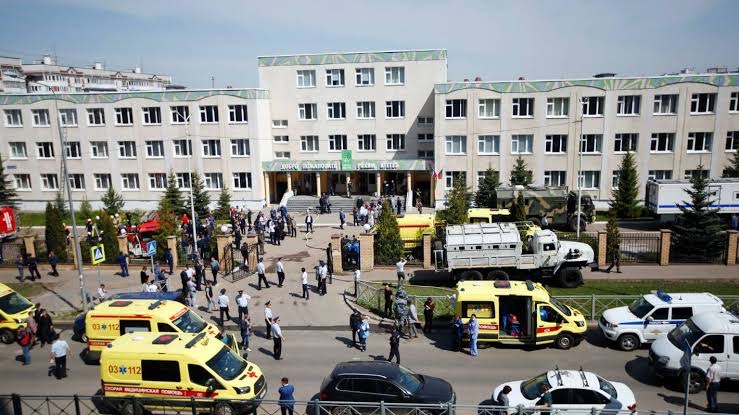 A gunman launched an attack on a school in the Russian city of Kazan that has left at least nine people dead on Tuesday — including seven youngsters — and sent students running out of the building as smoke poured from one of the windows.

At least 21 others have been hospitalized, six in extremely grave condition, authorities said.

The attacker, identified only as a 19-year-old, was arrested, officials said. They gave no immediate details on a motive.

Russian media said the gunman was a former student at the school who called himself “a god” on his account on the messaging app Telegram and promised to “kill a large amount of biomass” on the morning of the shooting.

Officials said at least one gunman had been involved and detained, though there were unconfirmed reports of two attackers including one who had been killed.

A police spokesman said officers were dispatched to School No. 175 in Kazan, the capital of the Russian republic of Tatarstan, after reports of shots being fired.

Amateur footage on social media, apparently filmed from a nearby building, showed people escaping from the school by jumping from second- and third-floor windows, with sounds of gunshots echoing in the schoolyard.

There were initial reports of two shooters, with one reportedly barricaded on the fourth floor of the building and killed, but officials later said a lone attacker had been responsible.

The Investigative Committee, which probes major crimes in Russia, said a local resident born in 2001 had been detained in connection with the attack.

Russian President, Vladimir Putin called for a review of gun control laws after the shooting, while the authorities declared a day of mourning for Wednesday.

Tatarstan regional leader, Rustam Minnikhanov arrived at the scene and entered the school after it had been declared secure by law enforcement.

“We are deeply saddened that this has happened,” Minnikhanov said in televised remarks. “It’s a major tragedy for our republic.”

He expressed earlier that four boys and three girls were among those killed.

“Sixteen more people are in hospital,” Minnikhanov said, including 12 children and four adults.

He described the detained assailant as a “terrorist” and said the 19-year-old shooter had a licence to carry a firearm.

Images broadcast on state television showed dozens of people outside the school with fire services and police vehicles lining nearby streets.

“I was in class, I first heard an explosion, then gunshots,” news agency TASS quoted a student as saying.

Elena, a Kazan resident who said she was outside the school, told Echo of Moscow radio station that law enforcement was removing people from outside the premises.

“Parents are crying, medics are giving out medicine. People are hysterical,” she told the radio station.

Meanwhile, Putin expressed his “deep condolences” to the victims and ordered a review of gun control legislation, the Kremlin said.

“The president gave an order to urgently work out a new provision concerning the types of weapons that can be in civilian hands, taking into account the weapon” used in the attack, Putin’s spokesman Dmitry Peskov told reporters.

Russia has relatively few school shootings due to normally tight security in education facilities and the difficulty of buying firearms legally, although it is possible to register hunting rifles.

In November 2019, a 19-year-old student in the far eastern town of Blagoveshchensk opened fire in his college, killing one classmate and injuring three other people before shooting himself dead.

In October 2018, a teenage gunman killed 20 people at Kerch technical college in Crimea, the peninsula Russia annexed from Ukraine in 2014.

The 18-year-old attacker, who also set off explosives in one of the school’s buildings, shot himself dead at the site.

He was shown in camera footage wearing a similar T-shirt to Eric Harris, one of the killers in the 1999 Columbine High School shooting in the US, which left 13 people dead.

Putin at the time blamed the attack on “globalisation” and online communities dedicated to American school shootings which promoted “fake heroes”.

Crimea shooter, Vladislav Roslyakov, was able to legally obtain a gun licence after undergoing marksmanship training and being examined by a psychiatrist.

The shooting led to calls for tighter gun control in Russia.

The country’s FSB security service says it has prevented dozens of armed attacks on schools in recent years.

In February last year, FSB said it had detained two teenagers on suspicion of plotting an attack on a school in the city of Saratov with weapons and homemade explosives.