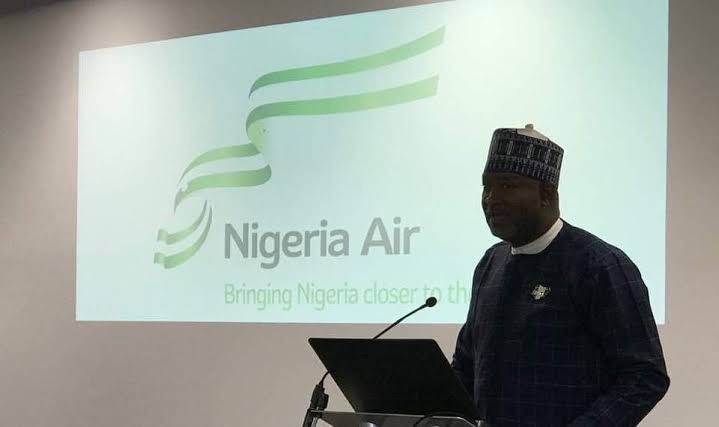 Minister of Aviation, Hadi Sirika, has on Wednesday announced that the new national carrier is expected to commence operation by the first quarter of 2022.

He explained that the new national carrier is long overdue and the private sector-run airline will be in operation by early 2022, with possibly cheaper rates.

The Minster added that the new national carrier is expected to be a viable airline and is potentially poised to cater to millions of travelers in Nigeria and Africa.

According to Sirika, the forced postponement of the planned date for the establishment of the National Carrier (which was initially planned for the end of 2021) was due to the COVID-19 pandemic.

He disclosed that the Ministry would return to the council in two weeks to submit a memo with an outline business case for council’s approval.

It would be recalled that Federal Government in September 2018 suspended proposed new National Carrier, Nigeria Air.

Read Also: “I Regret To Announce That The National Carrier Project Has Been Suspended Indefinitely” – Minister Of Aviation, Hadi Sirika

The Minister of Aviation made the announcement in a Tweet on his official Twitter handle but gave no reason for the decision. 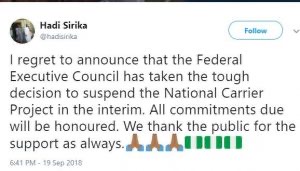 Later in 2019, Sirika reiterated that the establishment of National Carrier, Maintenance, Repair, and Overhaul (MRO) facilities and implementation of other components of Aviation Roadmap remain top priorities of the Federal Government.

According to him, the establishment of the national carrier would further position Nigeria to compete with other nations, in line with Single African Air Transport Market (SAATM) project and develop as a regional hub for air transportation.

Iranian Film Director Killed, Dismembered By Parents For Not Being Married At 47

Super Eagles To Play Mexico On July 3 In Los Angeles