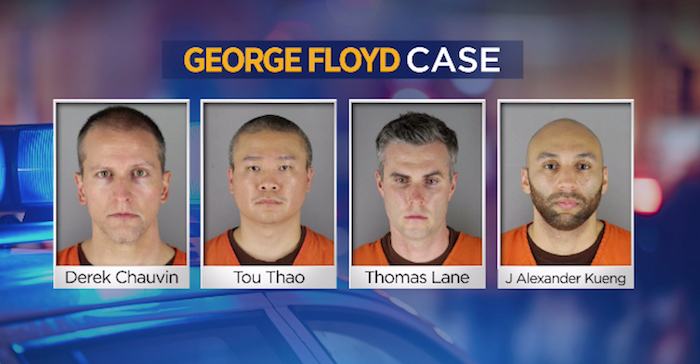 Floyd was killed on May 25, 2020, when former officer Derek Chauvin kept his knee on the Black man’s back for more than nine minutes. A jury found Chauvin guilty of three counts of unintentional murder and manslaughter in April.

Chauvin has however asked for a new trial on claims of jury and prosecution misconduct as his attorney, Eric Nelson argued that his client did not get a fair trial due to publicity around the case, court and prosecution errors, as well as “race-based pressure” on the jury.

He also alleges that jurors should have been isolated during the trial and that the case could only get a fair hearing in a different place, citing the media frenzy surrounding his trial.

The third count of the civil rights indictment claims that Chauvin, along with the three officers who were present as Floyd died; Thomas Lane, Tou Thao and J Alexander Kueng, “willfully deprived” Floyd of the civil right guaranteed by the US Constitution “not to be deprived of liberty without due process of law”.

Chauvin is charged with violating Floyd’s right to be free from unreasonable seizure and unreasonable force by a police officer.

Read Also: 4 US Policemen Sacked Over Death Of African American Man, George Floyd, After Policeman  Pinned Him Down By Throat With His Knee

Chauvin also was charged in a separate indictment related to an incident in which he allegedly used unreasonable force on a Minneapolis 14-year-old in September 2017, Justice Department said in a statement Friday.

The first count of that indictment says Chauvin “held the teenager by the throat and struck the teenager multiple times in the head with a flashlight,” per the DOJ statement.

A second count says he “held his knee on the neck and the upper back of the teenager even after the teenager was lying prone, handcuffed, and unresisting, also resulting in bodily injury.”

Meanwhile, Thao and Kueng are also charged with violating Floyd’s right to be free from unreasonable seizure, alleging they did not intervene to stop Chauvin as he knelt on Floyd’s neck. All four officers are charged for their failure to provide Floyd with medical care.

To bring federal charges in deaths involving police, prosecutors must believe that an officer acted under the “color of law,” or government authority, and willfully deprived someone of their constitutional rights, including the right to be free from unreasonable seizures or the use of unreasonable force.

That is a high legal standard; an accident, bad judgement or simple negligence on the officer’s part is not enough to support federal charges.

Chauvin’s guilty verdict gave hope to police reform activists that the US was turning the page on what they view as impunity for killer cops.