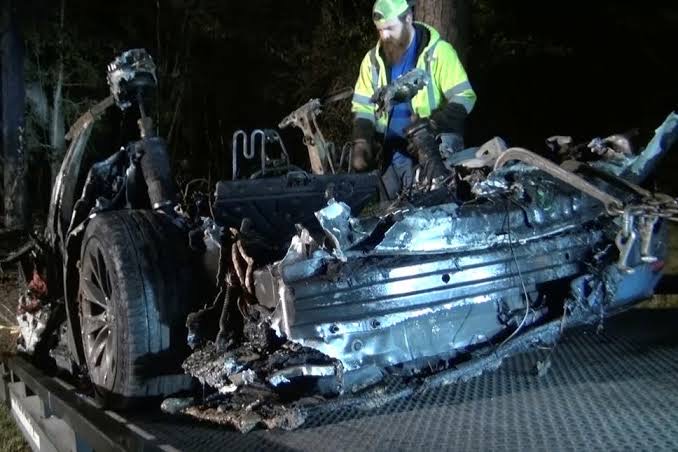 Two men have died in Texas after a Tesla car with no one in the driver’s seat veered off-road and crashed into a tree at high speed, authorities in Texas said today.

A police officer told media outlets in Houston that one of the victims of the crash was in the front passenger seat while the second was on the back seat.

The vehicle, 2019 Tesla Model S was reportedly traveling at high speed when it failed to negotiate a curve on a winding road.

According to CNBC, police sources revealed that the incident transpired on Saturday night.

Authorities said the car was traveling fast and failed to navigate a turn before running off the road, hitting a tree, and bursting into flames.

While the disclosure was based on inconclusive preliminary investigations, firefighters were said to have used about 32,000 gallons of water and spent hours suppressing the fire that resulted from the electric vehicle crash.

The wives of the deceased riders explained that they heard their husbands discuss that they wanted to go for a drive and were talking about the vehicle’s autopilot feature minutes before the crash, New York Times reports.

Traffic safety officials are investigating several Tesla crashes in which the vehicle’s Autopilot function may have been used.

The company warns customers that its driver-assist system, called Autopilot, is not an autonomous-driving program, and that they must pay attention and be ready to take control of the vehicle.

It added that it has also included systems in its cars that are supposed to ensure that the owners keep their hands on the wheel.

However, National Transportation Safety Board last year said the design of the system allows drivers to avoid paying attention and fails to limit where Autopilot can be used.

Tesla sells automated driving systems under the brand Autopilot, and Full Self-Driving (FSD). It released the beta version of its FSD software to some customers who have premium FSD option, which currently costs $10,000.

However in March, US auto safety agency said it has opened 27 investigations into crashes of Tesla vehicles — with about three of the crashes occurring in the past weeks.

European Super League To Sue UEFA Over Threat To Ban Barca, Arsenal, Others