Tinubu was accompanied to the meeting by a former national chairman of the APC, Chief Bisi Akande. 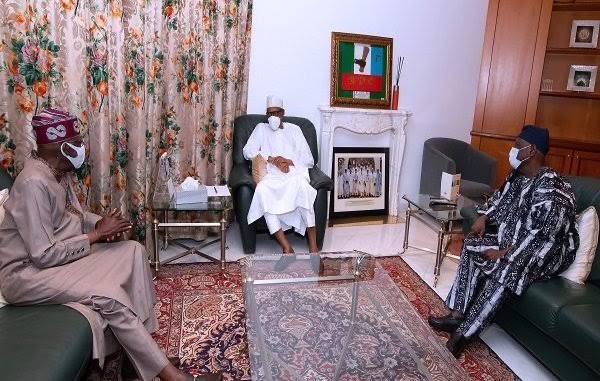 The meeting was said to have centred on the security situation in the state amid a series of violent attacks reported across the country, especially between Sunday and Monday.

On Sunday, a commander of one of the Nigerian Army’s battalions was reportedly killed by suspected Boko Haram insurgents who attacked a military base in Mainok, Borno.

Thirty soldiers were also said to have been killed in the attack.

The troops were said to have been overpowered by the insurgents who came with “heavy weapons” and were disguised in a military convoy.

A police station was also razed in the attack while weapons were looted at the military base.

The attack comes nine days after hundreds of residents of Damasak, Mobbar LGA in Borno, were displaced following an attack by the insurgents.

In Yobe, about two thousand people were reportedly displaced in Geidam area of the state after insurgents took hold of the town.

The insurgents who belong to Islamic State in West Africa Province (ISWAP) have occupied the town since last Friday.

Abubakar Bello, governor of Niger, on Monday, said Boko Haram insurgents have hoisted their flag in Kaure, Shiroro LGA of the state.

Bello also said over 50 villages in the state have been deserted as a result of attacks by bandits.

Five officers were reportedly killed by the attackers when they invaded the station on Monday evening.

Infection Surge: COVID-19 Situation In India Is ‘Beyond Heartbreaking’ – WHO Chief