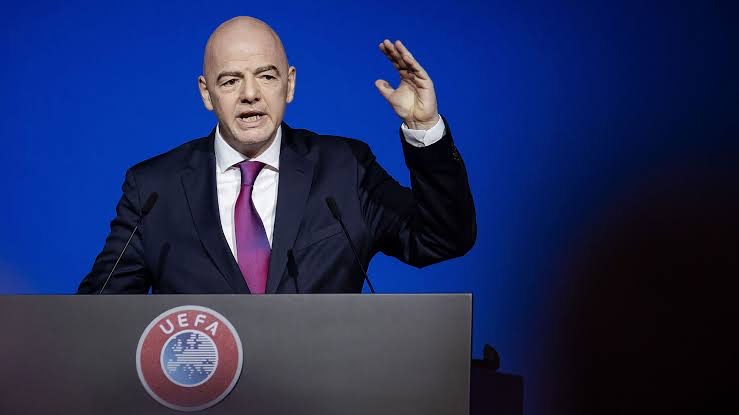 FIFA president, Gianni Infantino has on Tuesday said there is “no doubt whatsoever” that football’s world governing body “disapproves” of the proposed European Super League (ESL).

Infantino has warned that the clubs involved “must live with the consequences of their choice“.

Twelve major clubs launched plans on Monday for a new breakaway league which would drastically change the landscape of the world’s most popular sport.

The plans, which have thrown the world of football into tumult, would involve 20 clubs playing in a midweek League – with the founding 12, and three others yet to join, permanent members of the competition and not subject to possible relegation.

Speaking about this at a UEFA congress in Switzerland, Infantino stated;

At FIFA we can only and strongly disapprove the creation of the Super League, of a Super League who is a closed shop, a breakaway from the current institutions, from the leagues, from the associations, from UEFA, and from FIFA. There is no doubt whatsoever of FIFA’s disapproval for this.

UEFA has said the teams would be banned from domestic and other European competitions, including the Champions League.

Meanwhile, Real Madrid president Florentino Perez, the head of the new ESL, has insisted that would be “impossible”, but Infantino threatened action as FIFA took a stronger stance than it did with its initial statement when the news first broke.

It is our task to protect the European sport model, so if some elect to go their own way then they must live with the consequences of their choices. They are responsible for their choices. Either you’re in or you’re out. You can’t be half in and half out. Think of it, this has to be absolutely, absolutely clear.

You showed that you care about the values of football. And if we stand together, we are unbeatable.

Ceferin pointed out that success and club size can change over time, and said;

Where were Manchester United in the decade before Sir Alex Ferguson arrived on the scene? And where were Juventus 15 years ago?

Come to your senses, not out of love for football, because I imagine some of you don’t have much of that, but out of respect for those who bleed themselves dry so that they can go to the stadium to support the team, and want the dream to be kept alive. For those, you (must) change your mind.