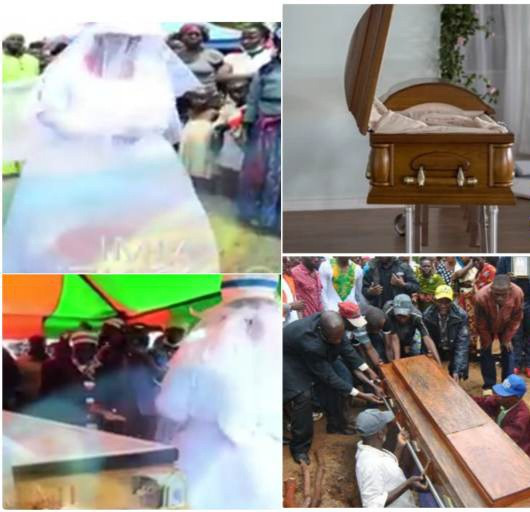 It is not a daily occurrence to walk into a compound meant to hold a funeral and bump into a bride in full wedding attire.

However, that was the case in Funyula Busia County, Kenya over the weekend when a woman, Beatrice Mbayi tied the knot with her late groom,  William Godfrey Mukalama, who lay lifeless in a brown casket, Kenyan media TUKO reports.

On the ground were garments spread out to create a path that would lead the woman from her house to the tent where the body lay.

The bride, wearing a white wedding dress, was escorted by women in the community, as she walked down to the corpse housing her husband’s body, while the man presiding over the ceremony told said;

We are aware it is not your wish to have a wedding ceremony in this manner, but kindly accept this ring so that you and your wife will remain one.

The congregation, who were in their numbers, cheered as the ring was slid onto the finger of the departed groom.

According to reports, Mbayi is a member of a Jerusalem Church, headed by Prophetess Mary Akatsa, whom they call ‘Mummy’.

Members of the church view death as a graduation, hence the belief that even in death a couple could remain together.

Watch some videos of the ceremony below;

The wedding ceremony was attended by a large crowd. Cc @Gidi_Traffic pic.twitter.com/RNLfPTOHnu

World’s Most Expensive Racing Pigeon Is Worth At Least $1.5…

Man Gets Arrested On Purpose In Order To Avoid Getting…