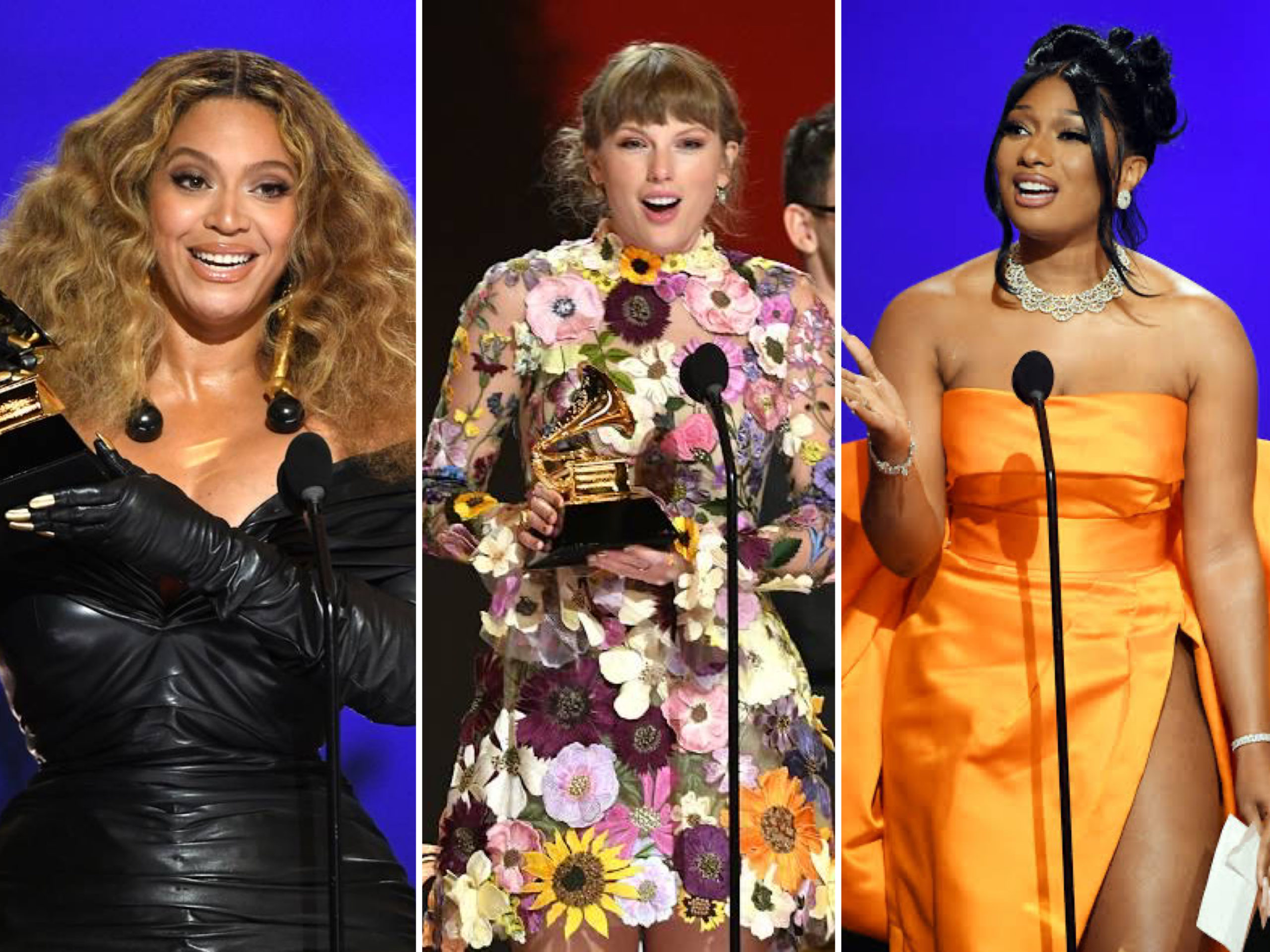 Beyoncé, Taylor Swift, Megan Thee Stallion had a historic night at the Grammys, where top four awards were won by female acts.

This year’s edition of the Grammys was earlier scheduled for January but postponed amid concerns over the coronavirus pandemic.

Due to the pandemic, there was no live audience for the Grammys this year, except for a limited number of performers and nominees.

The iconic singer, who had nine nominations, the most of any artist in 2021, made history with her 28th win.

The star has now equalled super-producer Qunicy Jones‘ total of 28 Grammys. Only classical conductor Sir Georg Solti has more, with 31.

“I am so honoured, I’m so excited,” she said while accepting her record-breaking trophy, for best R&B performance.

The Houston musician picked up the prize for her breakout hit Savage (Remix), on which Beyoncé delivers a guest verse.

Taylor Swift also made history at Sunday’s ceremony, by becoming the first female artist ever to win album of the year three times.

The star was rewarded for her lockdown album Folklore – after previously winning with Fearless in 2010 and the pop opus 1989 in 2016.

Only three other artists have ever won the album of the year prize three times: Frank Sinatra, Paul Simon and Stevie Wonder.

Meanwhile, Beyoncé’s Black Parade was not the only award-winner song to reflect the Black Lives Matter movement: R&B Singer H.E.R. won song of the year for I Can’t Breathe, which quotes the last words of George Floyd.

Read Also: 4 US Policemen Sacked Over Death Of African American Man, George Floyd, After Policeman Pinned Him Down By Throat With His Knee

The 46-year-old died while being arrested by police in Minneapolis last year. His death, along with that of Breonna Taylor, sparked a global wave of protests.

Accepting the prize, H.E.R. said she never imagined “that my fear and my pain would turn into impact“.

Other prize-winners included Dua Lipa, who picked up best pop vocal album; and Lady Gaga and Ariana Grande, who became the first female duo to win best pop collaboration for Rain On Me.

Cardi B and Megan Thee Stallion got together for the first ever TV performance of their X-rated single WAP. While Bruno Mars and Anderson .Paak unveiled their new “supergroup” Silk Sonic, channelling the 70s soul sounds of Earth, Wind And Fire.

John Prine and Chick Corea were both awarded posthumous Grammys in the pre-ceremony. Both were honored in the ceremony’s In Memoriam segment, which honored the performers and behind-the-scenes talent who have died in the last year.

Trevor Noah of “The Daily Show” hosted the ceremony from the Los Angeles Convention Center, and as with other award shows held during the pandemic, there was no audience for the Grammys this year.

Check out the list of winners below (see exhaustive here);