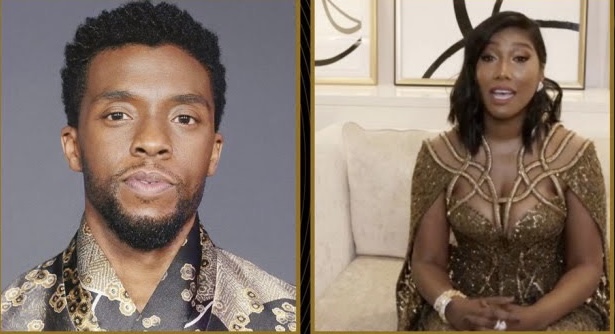 As widely predicted, late Chadwick Boseman has won Best Performance by an Actor in a Motion Picture, Drama at Golden Globes 2021 on Sunday, February 28.

Boseman picked up the award for his performance as a talented jazz musician named Levee in “Ma Rainey’s Black Bottom” movie.

As she did in January following his Gotham Awards win, Boseman’s widow, Taylor Simone Ledward, gave an emotional acceptance speech on the actor’s behalf.

It would be recalled that Boseman died on August 18, 2020, of cancer at the age of 43. His death at such a young age shocked Hollywood, coming as the actor had summited the A-list with his performance in the Marvel box office smash “Black Panther.”

I don’t have his words, but we have to take all the moments to celebrate those we love, so thank you HFPA, for this opportunity to do exactly that. And, honey, you keep ’em coming. Thank you.

Boseman beat out stiff competition to win the honor. He was up against Anthony Hopkins (“The Father”), Riz Ahmed (“The Sound of Metal”), Gary Oldman (“Mank”) and Tahar Rahim (“The Mauritanian”).

The actor also recently appeared in Spike Lee’s “Da Five Bloods,” a Vietnam drama that has earned him Oscar buzz.

Over the course of his career, Boseman showed a talent for playing historical figures, turning in memorable performances as baseball great Jackie Robinson in “42,” music legend James Brown in “Get on Up,” and as Civil Rights crusader Thurgood Marshall in “Marshall.” He also starred in the 2019 thriller “21 Bridges.” This was Boseman’s first Golden Globe nomination.

Watch a video of her speaking below;