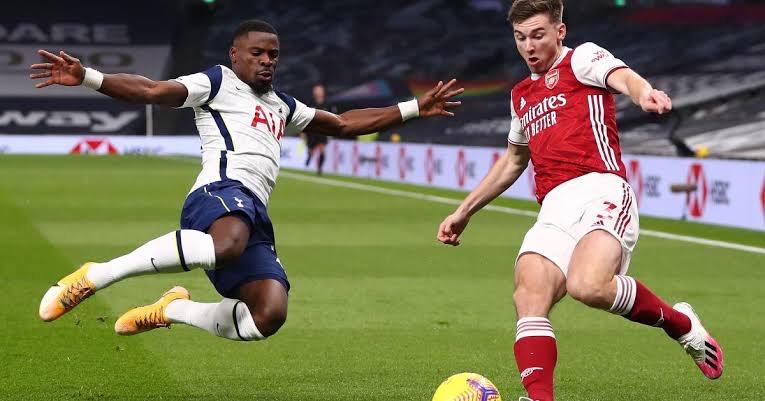 Mikel Arteta’s Arsenal are currently 10th on EPL table, having picked up just 38 points from 27 matches this season, while Spurs (Tottenham) occupy seventh, five points behind fourth-placed Chelsea with a game in hand.

Meanwhile, (Gunners) Arsenal will enter Sunday’s derby off the back of a morale-boosting 3-1 win over Olympiacos in the first leg of their last-16 Europa League tie, which has placed Arsenal in a strong position to reach the quarter-finals.

The Gunners will more than likely have to win this season’s Europa League in order to be present in 2021-22 Champions League as they currently sit down in 10th position in the table, 12 points off the top four, having won just 11 of their 27 league matches this season and suffered 11 defeats. They have the same number of defeats as struggling Brighton & Hove Alvions and are just one fewer than Fulham in 18th.

Arsenal have had two recent impressive wins against Leeds United and Leicester City in English domestic league, but they were held to a 1-1 draw by Burnley at Turf Moor last weekend. A mistake from Granit Xhaka allowed Chris Wood to cancel out an early goal from Pierre-Emerick Aubameyang.

Additionally, Gunners are seven points behind seventh-placed Tottenham on the same number of matches, and it is incredibly difficult to imagine the Gunners finishing in a potential European spot. This season’s top-4 race has been steep, as teams struggle from inconsistency due to tight fixture schedules.

Home form has been an issue this term, with Arteta’s side dropping points in eight of their 13 league matches at Emirates Stadium, while they have not enjoyed their recent meetings with Tottenham, losing three of the last five fixtures between the two sides in all competitions.

Spurs (Tottenham) will also enter Sunday’s North London derby off the back of a positive result in Europa League, with Harry Kane scoring twice in a 2-0 home success over Dinamo Zagreb.

In all competitions, Tottenham have now won their last five matches, including their last three in the Premier League against Burnley, Fulham and Crystal Palace.

There was a lot of pressure on the team to pick up a strong result against Palace last weekend, and an excellent performance saw Kane and Gareth Bale both net braces in a 4-1 success.

After losing 2-1 to West Ham United on February 21, Jose Mourinho’s Tottenham looked out of contention for a top-four spot, but the club are now just five points behind fourth-placed Chelsea with a game in hand and will certainly believe that they are capable of ending in the top-4 league position.

Spurs will also face Manchester City in the final of English Football League (EFL) Cup at the end of April, and it could be a brilliant end to the campaign with a silverware who have certainly had their problems this season.

Arsenal have a fully-fit squad for North London Derby, with Emile Smith Rowe making his return from injury as a substitute against Olympiacos in Europa League on Thursday evening. He sustained an injury when Arsenal faced Leicester in EPL.

As for Tottenham, Giovani Lo Celso remains a slight doubt with a back problem, but Kane should be available despite suffering a knock to his knee during Thursday’s clash with Dinamo, having scored a brace in the match.