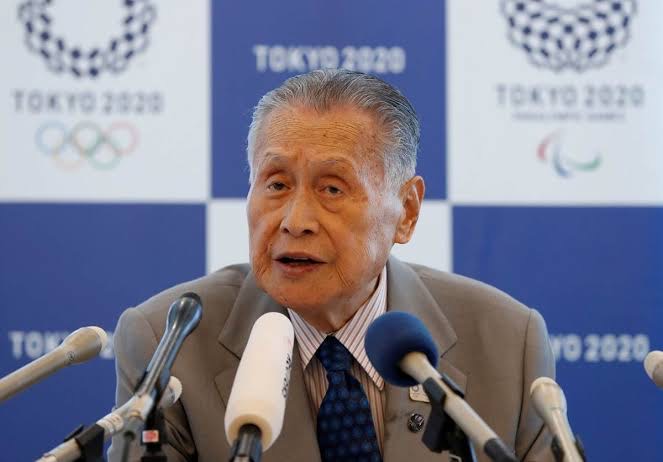 The 83-year-old Japanese politician, who served as Prime Minister of Japan between 2000 and 2001, earlier this month said women elongate meetings unnecessarily because they talk too much.
He also stated that;

Women have a strong sense of rivalry. If one raises her hand to speak, all the others feel the need to speak, too. Everyone ends up saying something.

His remark, considered derogatory in some quarters, was greeted with widespread condemnation, with many requesting that he resigns.

On Tuesday, a group of female Japanese politicians wore white as a mark of protest against his remarks.

He has now told a board meeting on Friday he will not continue as Olympics chief, saying the most important thing is that the Games are a success.

In a statement, Mr. Yoshiro apologized for his comments, saying he’s been “trying to support women as much as possible“.

Read Also: “Tokyo Olympics Will Be Cancelled If Pandemic Not Over By 2021” – Committee President

Mori, whose words were translated into English, on Friday said;

My inappropriate statement has caused a lot of chaos. I will be resigning from the president’s position.

I would like to express my deepest apologies to the members of the council and executive board, as well as the entire community.

The important thing is that the Olympic Games is to be held in July. If I am going to be (an obstacle) to the Games’ delivery then that is something I think we should avoid.

I didn’t mean for (my remarks) to be neglecting women but I guess it was broadcasted in that way.

I actually worked a lot to allow women to be able to ‘voice out’, even more than men.

There were times when the females were not voicing out but I had appointed a couple of women so I can give them an environment and an opportunity to state whatever it is they wanted to say.

“My inappropriate comments caused big trouble. I am sorry,” he said, explaining he had not meant to cause offence and he believed his remarks were misinterpreted.

There were times when people would not put their hands up and not speak up, and I would go out of my way to say … please speak and I feel that women have been able to speak a lot.

In 2014, Yoshiro Mori was appointed to head the organizing committee for 2020 Summer Olympics, which was postponed to 2021 due to COVID-19 pandemic.

Read Also: Just In: Tokyo 2020 Olympics Postponed To 2021 Due To Coronavirus

It was gathered that the organising committee will constitute a panel comprising an equal number of men and women to select his successor.