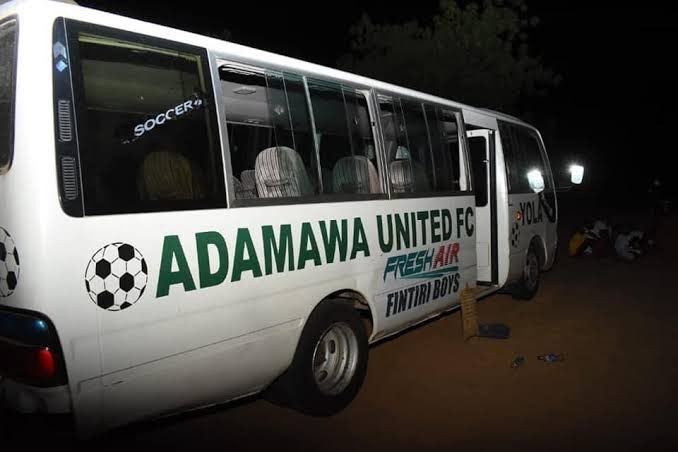 Gunmen have attacked Adamawa United FC, dispossessed players and officials of valuables as well as kidnapped the team driver.

According to Punch, the incident occurred on Friday night along Benin-Ore Expressway while on their way to Lagos state for a Nigeria Professional Football League (NPFL) clash against MFM FC.

A member of the team who spoke on phone regarding the incident said the players and officials were attacked by the gunmen who suddenly emerged from the bush and held up the team at gunpoint.

The source stated that phones of the team members, their money and other valuables were taken away by the attackers.

In Adamawa State capital, Yola, the Permanent Secretary in the state’s Ministry of Youths and Sports, Alhaji Aliyu Jada, confirmed the incident.

Aliyu Jada said the kidnappers had contacted the team manager and demanded a ransom of N50 million for the release of the team’s driver.

It’s been a week of unpleasant experience for many players and officials of NPFL clubs.

On Thursday, February 18, Wikki Tourists bus got burnt while travelling to Uyo, Akwa Ibom for their NPFL tie with Dakkada FC.

Players and officials of NPFL clubs have had nightmarish moments while travelling for games across the country following the poor state of security in the country in recent years.

Due to the economic issues in Nigeria, clubs have been forced to make longer and more treacherous journeys by road in order to reduce costs.

In 2015, five Kano Pillars players were shot while travelling to Owerri, Imo state.

There was a similar incident less than a year later, as another Premier League team, Enyimba’s bus was attacked on their way for a pre-season tournament.

Gunmen also attacked members of IfeanyiUbah FC in Kogi November 29, 2019, while on their way to Kano for a League clash versus Pillars.

The gunmen reportedly opened fire on the team bus, with the bus driver and a player sustaining injuries.