President Donald Trump has reportedly granted full pardon to Dwayne Michael Carter Jr., better known as Lil Wayne, according to a statement from the White House.

The statement which outlines pardons to 73 people and commutations of sentences to another 70, including rapper Kodak Black, was released early on Wednesday morning, just hours before Trump’s time as president ends.

Commutation of sentence is a change of a legal penalty or punishment to a lesser one. It however does not affect the status of a defendant’s underlying criminal conviction.

Lil Wayne, a multi-platinum artist and record label founder who has won five Grammys, pleaded guilty to last month to possessing a loaded, gold-plated handgun when his chartered jet landed in Miami in December 2019.

The 38-year-old faced a sentence of up to 10 years in prison having previously served eight months in jail in New York and was awaiting his sentencing later this month.

The guilty plea came weeks after he met with Trump in Miami, Florida, to discuss the President’s “platinum plan” aimed at courting Black voters days before the election.

“Just had a great meeting with @realdonaldtrump,” Lil Wayne said in a tweet after the October 29 meeting, posting a photo alongside Trump, both men smiling with thumbs up. 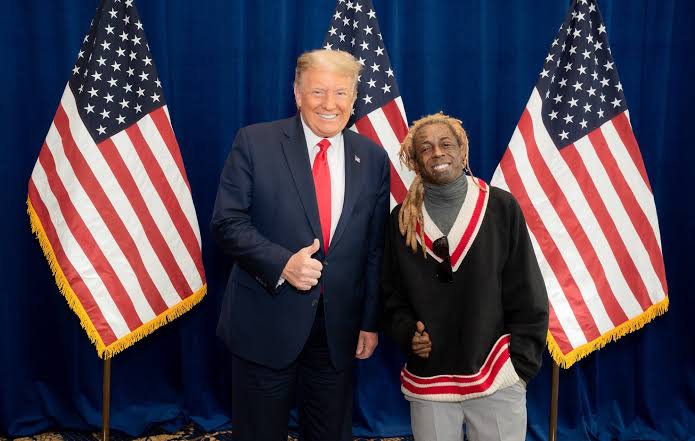 Besides what he’s done so far with criminal reform, the platinum plan is going to give the community real ownership. He listened to what we had to say today and assured he will and can get it done.

Kodak Black, 23, who was born Bill Kahan Kapri, is in federal prison for making a false statement in order to buy a firearm. He was sentenced to 46 months in prison on federal weapons charges in 2019.

He admitted to lying on background-check forms while buying multiple firearms. Two of the weapons were later found by police at crime scenes, including one with Black’s fingerprints and a live round in the chamber that had been used to fire at a “rival rap artist.”

Bradford Cohen, the attorney for both rappers, has now confirmed to Rolling Stone that both rappers were granted clemency.

President Trump and his administration have been tireless advocates on behalf of the African-American community. These pardons are a perfect example of this administration following up on its reforms and commitments.

Another pardon worthy of note is Steve Bannon, Trump’s former White House chief strategist. Bannon, along with three other people, were charged with defrauding donors in a scheme in which they claimed money was being raised for Trump’s border wall.

As previously mentioned, Donald Trump‘s wave  of commutations and pardons comes as he prepares to officially leave office in just a few hours.

Joe Biden will be inaugurated as the 46th president of the United States later in the day, after defeating Trump at the polls in the 2020 election.