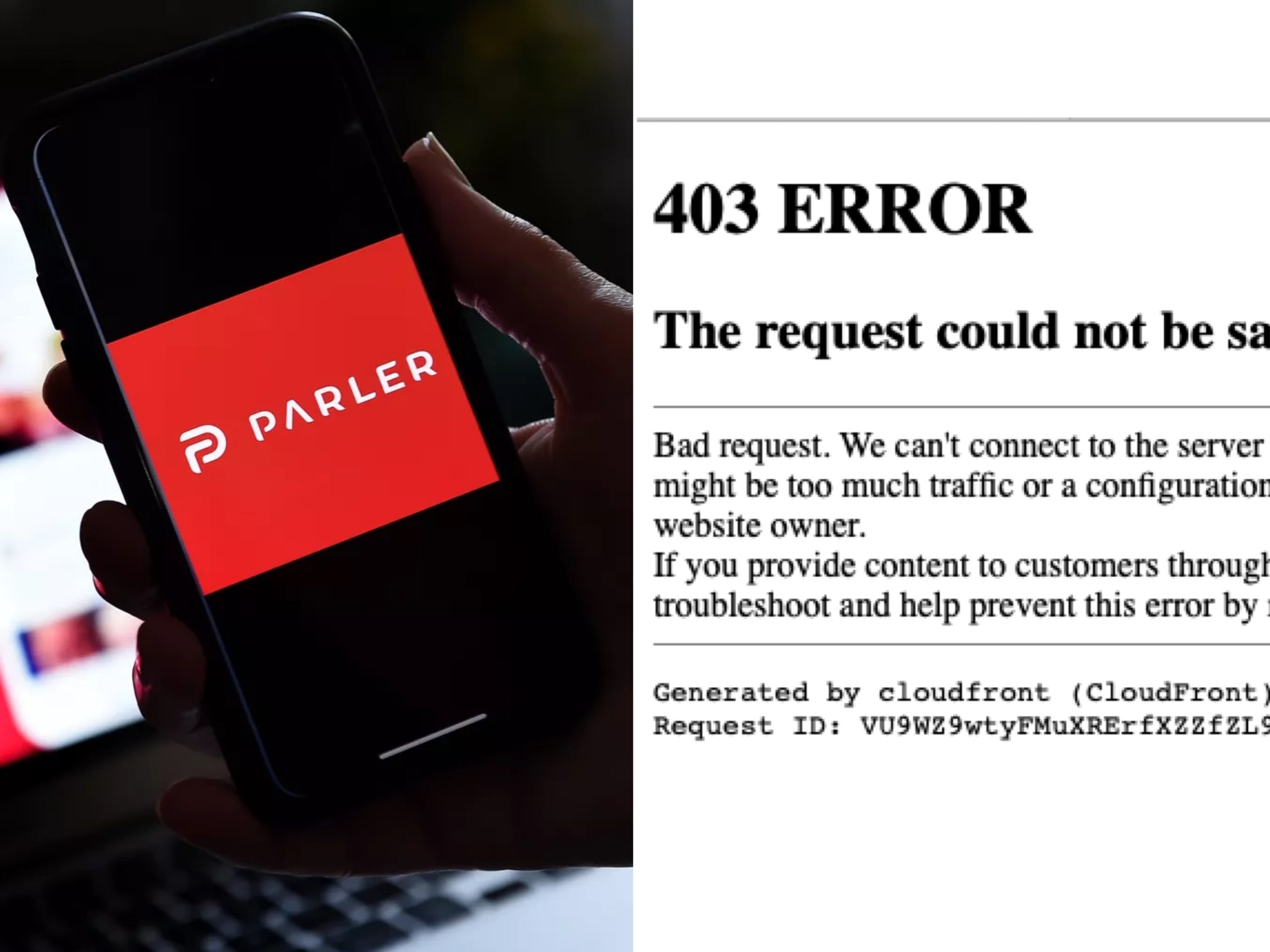 Parler, a social network that pitches itself as a “free speech” alternative to Twitter and Facebook, has been forced offline in the wake of the violent invasion of Capitol Hill in Washington, DC.

The app is a Twitter-like social media platform that works around a newsfeed of accounts that you can subscribe to follow. Parler, which calls itself the ‘world’s town square’, has been around since 2018.

There’s also the option to upload images and posts of up to 1,000 characters. Posts and messages on the platform are known as ‘parleys’.

Over the past several months, Parler has become one of the fastest-growing apps in the United States. Millions of US President Trump’s supporters have flocked to it as Facebook and Twitter increasingly cracked down on posts that spread misinformation and incited violence.

By Saturday morning, Apple listed Parler as the No. 1 free app for its iPhones. However, Parler is suddenly fighting for its life.

Amazon, which had provided the online tools to run the app, informed Parler that it would be cutting support on Sunday. Soon after that deadline arrived, the site and its app went offline.

Visitors will now only see error messages informing them that the technology underpinning the site is not working properly. 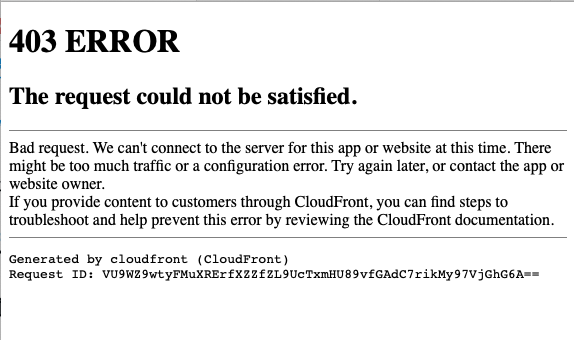 Amazon Web Services sent a detailed letter to the company including instances of such violent content and making clear that it believes “Parler does not have an effective process to comply with the AWS terms of service”.

The company took the decision to remove Parler after it found 98 posts on the site that encouraged violence. For instance, L. Lin Wood, a lawyer who had sued to overturn Trump’s election loss, posted on Parler on Thursday morning: “Get the firing squad ready. Pence goes FIRST.”

Before the shutdown, Parler chief executive John Matze posted on the site to inform users that it will “likely be down longer than expected“. 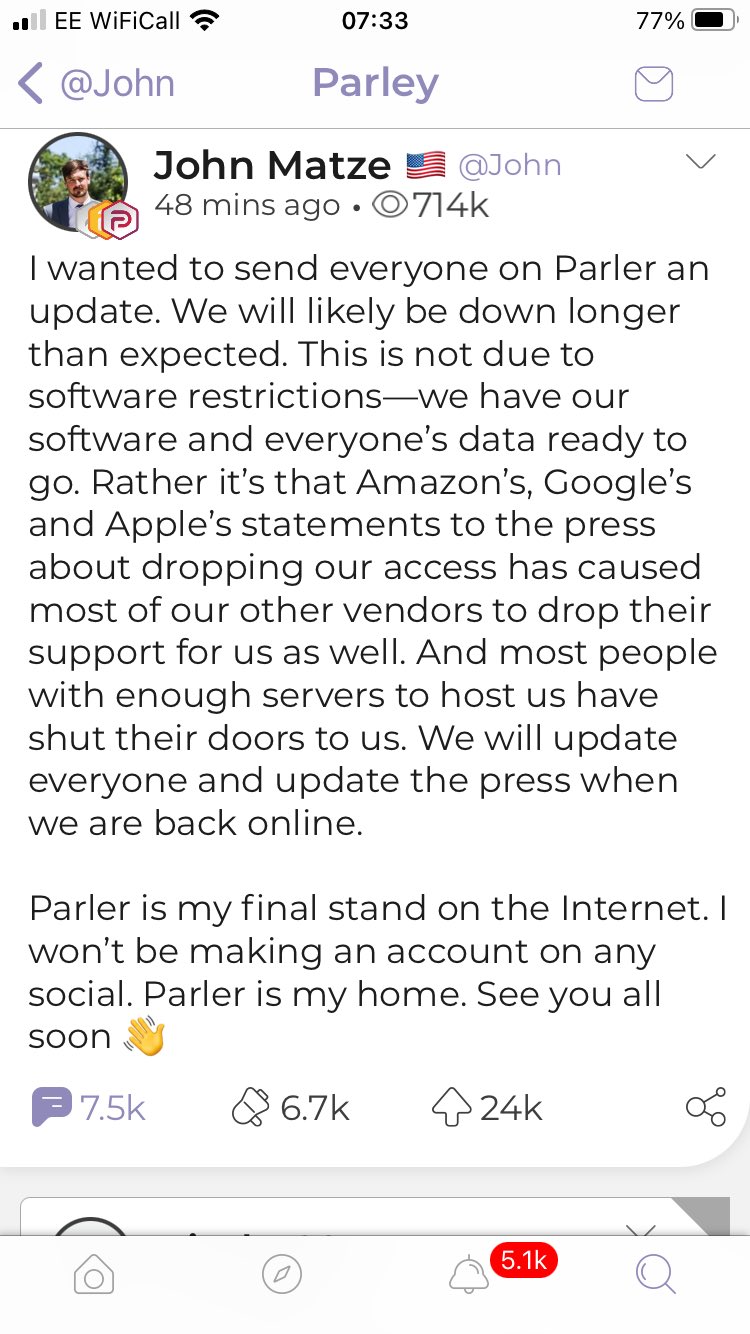 He said it was a result of other vendors dropping support for the site in the wake of public statements by Amazon, Google and Apple.

Matze complained on his site of being a scapegoat, saying; ‘Standards not applied to Twitter, Facebook or even Apple themselves, apply to Parler’.

He added that he would not ‘cave to politically motivated companies and those authoritarians who hate free speech’.

Over the weekend, the app was removed from both Google Play Store for Android and Apple’s App Store for iOS for its lack of moderation.

Apple gave the site 24 hours to provide a content moderation plan, after it emerged that the US Capitol riots were co-ordinated through Parler.

In a statement, Apple said; “We have suspended Parler from the App Store until they resolve these issues”.

If Parler is able to find a provider and resume its service, it will still have an uphill journey to find new users without a place in the major app stores.

Apple’s decision blocks iPhone users from downloading the Parler app. People who already have the app will still be able to use it — if it comes back online — but their versions of the app will soon become obsolete as Apple updates the iPhone software.

Google cut Parler out of its Android app store, but it also allows apps to be downloaded from elsewhere, meaning Android users would still be able to find the Parler app, just with a bit more work.

If Parler finds a new web-hosting provider, its website would also be available via web browsers on phones and computers.

The actions against Parler were part of a wider crackdown by tech companies on President Trump and some of his most extreme supporters after Wednesday’s deadly riot in Washington.

Amazon announces vacancies for highly-skilled workers based in Lagos