Federal Government has confirmed that it will sell some government-owned properties to fund the 2021 budget.

The government also said it will sell some non-oil assets to serve as additional source of finance for the year’s budget.

Federal Government is to borrow N5.6 trillion from domestic and foreign sources to support the implementation of N13.59 trillion budget. However, there is a deficit of N5.6 trillion.

Finance Minister, Zainab Ahmed has now revealed that the FG plans to sell some government-owned properties.

She disclosed this during the budget presentation ceremony, titled, ‘Public Presentation of 2021 FGN Approved Budget – Breakdown and Highlights’ which was done virtually on Tuesday, January 12. 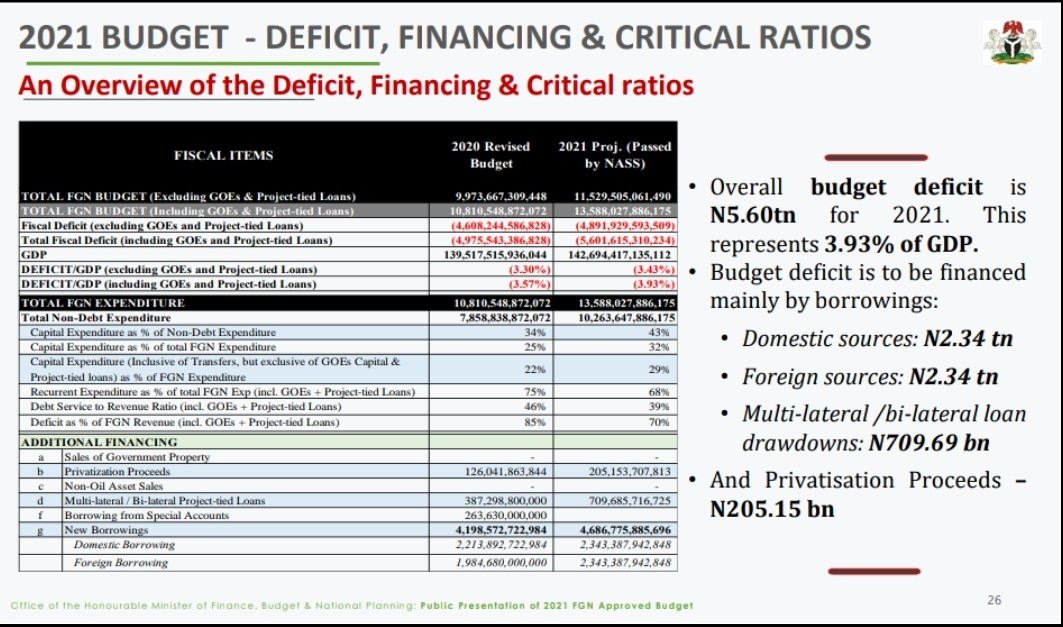 The document however did not state the assets to be sold, neither did it state the expected revenue from the sales

The recurrent expenditure was put at N5.6 trillion with capital expenditure at N4.1 trillion and fiscal deficit at N5.2 trillion.

Already, many have berated the federal government’s consistent resolve to borrow to fund budgets annually. For this year, the government is to borrow N5.6 trillion from domestic and foreign resources. The amount being the total deficit for the 2021 budget.

Both the president and Ms Zainab had said Nigeria will borrow money from the World Bank, the Islamic Development Bank and countries like Brazil to fund the budget.

According to the document, another means by which the government intends to fund the budget is by selling and concessioning government-owned properties and non-oil assets.

“Sales of government property” and “non-oil asset sales” were listed under the “additional financing” section of the document. This section shows an overview of how the deficit will be financed.

Although the document did not state the companies that have been put up for sale, neither did it state the expected revenue from the sales, this confirms earlier speculations of the government’s plan to sell off some properties.

Besides selling off national assets, the federal government also intends to finance the year’s budget through “Borrowing from Special Accounts.”

Although no amount was stated for this purpose, many believe it is the government’s plan to borrow money from dormant accounts, as announced earlier.

Ms Ahmed had disclosed that the government is targeting about N850 billion from unclaimed dividends and dormant bank deposits.

The government will also finance the budget through proceeds from privatisation of some public assets which has been put at N205.1 billion.

In addition, the document presented indicated plans by the Federal government to also concession the National Arts Theatre, Tafawa Balewa Square, and all the River Basin Development Authorities at N836 million while the National Stadium in Lagos, the Moshood Abiola Stadium, Abuja, and two others were pegged for concessioning at N100 million.

Actress, Rebel Wilson Reveals She Was Once Kidnapped At Gunpoint In Mozambique