Pius Angbo, a Channels Television reporter who was called out by his wife, Ifeanyinwa Angbo for battering her four weeks after childbirth has reconciled with her, following the intervention of Benue State Governor, Samuel Ortom.

It would be recalled that Ifeanyinwa was seen in a viral video crying to the public for help over alleged repeated assaults by her husband.

The woman, who is a medical doctor, in the two minutes and 13 seconds clip revealed that she had never known peace in six years of her marriage.

While showing her battered face, she added that her husband inflicted her with the injuries just four weeks after she gave birth to a baby through Cesarean Section.

She said her husband assaulted her after she advised him to desist from spending recklessly on other women and save the money to take care of his children.

In latest development, Ortom’s Senior Special Assistant on New Media, Jimin Geoffrey, in a statement shared via Facebook revealed that the couple have reconciled through the help of the Governor. 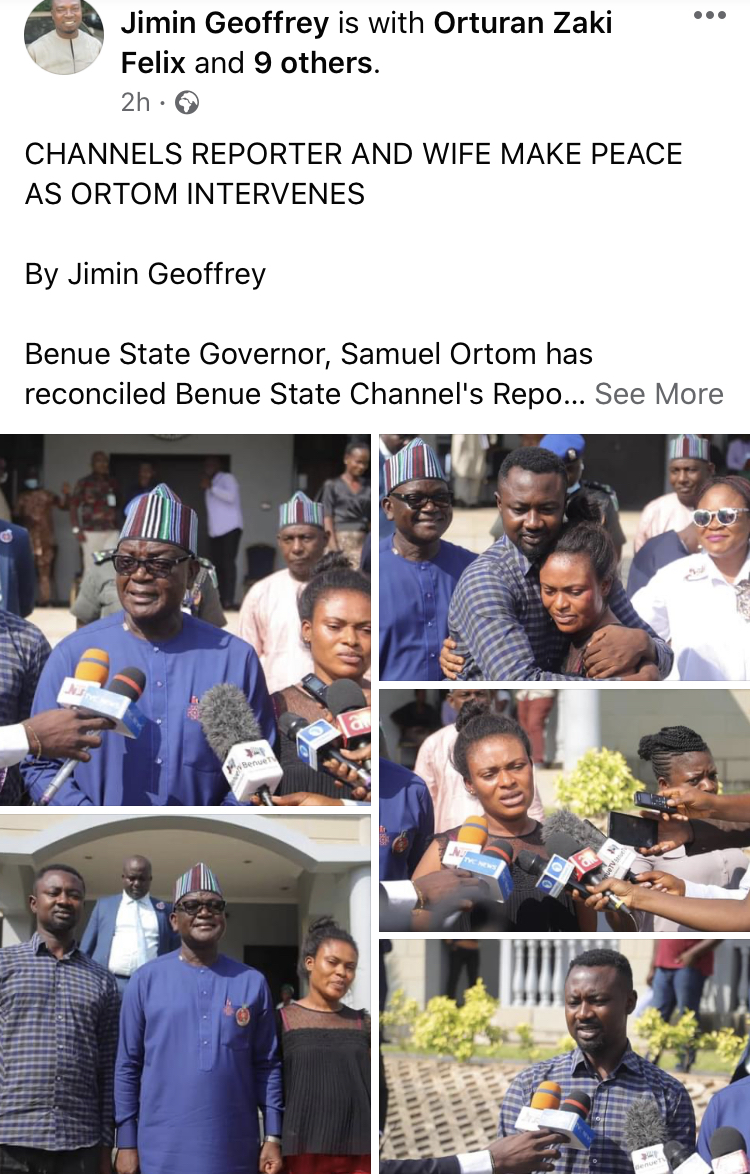 Meeting the couple at the Government House on Monday afternoon, Governor Ortom counselled them always to settle their differences amicably and shun the temptation of engaging in violence.

Ortom stated that as a young couple with great potentials, the husband being a versatile journalist and the wife a medical doctor, there was the need for them to foster a strong union to serve as models to others.

Angbo reportedly apologised to his wife over the assault, stressing that he also sought the forgiveness of every women as he would make amends going forward.

On her part, Ifeanyinwa told reporters that she accepted her husband’s apology because their children are still young.

She also said that they need prayers to grow stronger in love and nurture their kids to maturity.

The medical doctor thanked Governor Ortom for taking time out of his very tight schedule for the reconciliation meeting.

However, many Nigerians on Twitter have expressed scepticism about the new development, saying the wife appeared not to be satisfied with the reconciliation as she looked distraught in photos shared.

Some other people opined that the woman has exposed herself to more danger in the hands of her husband by accepting his apology.

They shouldn’t have brought it to social media if they could do this in the first place.

I just pray for this goes smooth because if it goes south again, I’m not sure she will have the courage to go public again.

Omo 😳😳 the lady’s face is still a mess but they are hugging to the full glare of everybody. Omo this love matter, e get as e be o…

The problem is not to reconcile them, it’s if he’ll unleash his beast side again. Because if it’s still unchained it will definitely surface again!

Reconcile? Did they have beef before or she was a punching bag?

If you’re A LADY and you’re reading this.. If a man hits like this.. Divorce.. DO NOT FOLLOW THE STEPS OF THIS FOOLISH WOMAN, it’s obviously she’s tired of life and wants to be buried ⚰. Next beating – we’ll attend her burial. pic.twitter.com/20cBfnzTxw

Until he kills her.

Shouldn’t he have been arrested for assault in the first place?

The Governor and his wife facilitated this?

Women are in trouble.

That is why you all need to to keep voting APC a party that love peace and harmony the FG will be visiting them soon further more the FEDERAL GOVERNMENT will provide noddles and half bag of rice tfor encouragement pic.twitter.com/8eGzH1bpU0

It’s so glaring that this woman is not happy, why force her back into this mans den?? What kind of useless reconciliation be this?

As currently structured, is built on systemic inequalities/injustice.

Nigerians mostly do citizenship the same way we do relationships

In a sane country this man should be behind bars for abuse but this is Nigeria and anything goes. Even looking at this picture she’s not happy and I wonder what they might have told her to agree 😔 I’m scared, I hope he doesn’t end her life

This man needs to visit psychiatry for more tests. Otherwise, this is just the beginning. He needs to be mentally balanced before he should be able to be reconciled with his family.

Like what happens to all the accusations? Did he sign or make any commitment to never touching her again? Or will it now be silence while she is being killed?

Ganduje Says Most Almajiris Are Not Nigerians

My Administration Will Continue To Resist Fulani…