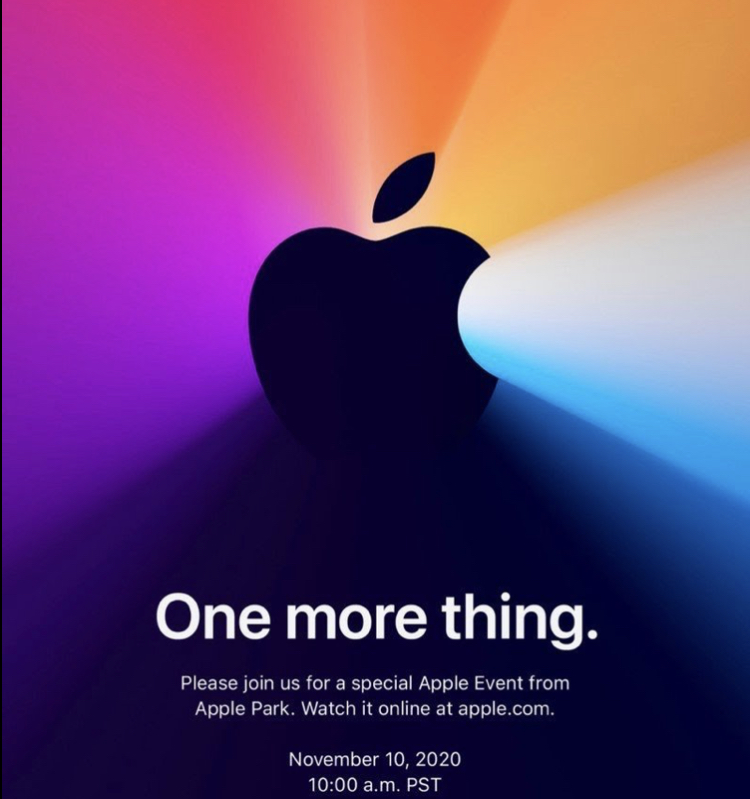 Apple has officially announced that a special event with the tag line ‘one more thing’ would take place on November 10 at 10am PT (7pm WAT).

According to TechCrunch, Apple sent out invites to the event on Monday, November 2 with invitees expected to attend remotely, becoming the third one in three consecutive months.

As with the September and October events that saw the debut of new Apple Watches, iPhones, and other products, the November event will be digital only, with Apple likely providing pre-taped segments for each new product that will be announced.

The “One More Thing” event is expected to focus on the long-awaited arrival of Apple silicon Macs, with Apple having promised its first Apple Silicon machine would come before the end of the year. Some products have been rumored for possible launched and here are some expectations below;

Apple Silicon‌ chips will bring improved performance and more efficient Macs that have a deeper integration between hardware and software, allowing for things like universal apps that run on all Apple devices.

There’s no clear word yet on which Mac will be the first to get an ‌Apple Silicon‌ chip, but rumors suggest Apple is working on a new MacBook Air or a revived 12-inch MacBook. There are also rumors of a new 14-inch MacBook and a 24-inch iMac, so these are possible candidates as well.

Apple is reportedly developing high-end over-ear headphones that are a part of the AirPods family, offering an over-ear alternative to the ‌AirPods‌ and the AirPods Pro. Rumors suggest the AirPods Studio will cost $349 (N132,000) and will offer Active Noise Cancellation and a retro-style design.

Rumors initially suggested ‌AirPods Studio‌ would launch before the end of the year, but Bloomberg recently said there have been development issues, so it’s now unclear if there would be still better launched in 2020.

AirTags are Apple’s long-rumored Bluetooth trackers that can attach to items like wallets and keys, letting them be tracked right in the Find My app alongside iPhones, iPads, and Macs.

It has been highly anticipated‌ for quite some time now and with the special event, there is a chance it may be released. However, there is also a chance that Apple is holding off until next year.

Cardi B Officially Files To Dismiss Divorce From Offset