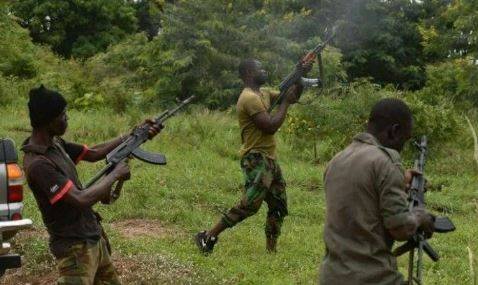 Suspected gunmen have killed 5 Muslim faithful, abducted an Imam and 40 others in Juma’at mosque in Dutsin Gari community of Kanoma District of Maru local government area of Zamfara state.

Dutsin Gari is well known for its sugarcane production, has long been a target of abductors.

Residents, according to Daily Trust, said dozens of unidentified gunmen arrived at the village on motorbikes when the Imam was delivering the sermon and they opened fire on the congregants.

Their gunshots caused a stampede and the cleric stopped his session at first Raka’a. This is prescribed movements and supplications performed by Muslims as part of Salaa prayer.

The Imam and others seized were forcefully transported into the bush.

There was a pandemonium as everyone was scampering for safety. They abducted the Imam and more than 30 others and dashed into the bush on motorbikes.

According to a source in the village, Sani Kanoma;

The imam and some of the other victims were, however, later released on Saturday without paying ransoms. The targets of the abductors are the wealthy sugarcane farmers who can pay millions of naira in ransom.