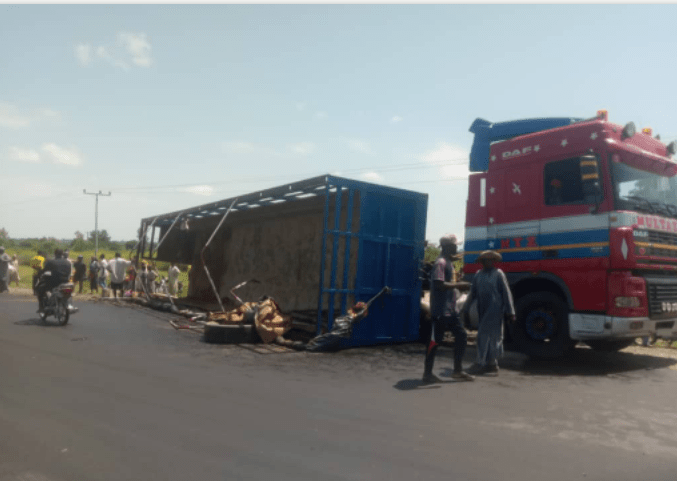 Five persons have been confirmed dead in an auto crash that occurred on Saturday, October 10 on the Mayo-Belwa–Ganye road in Adamawa State.

The accident happened after a trailer conveying cattle traders and their helpers known as ‘yan–tike–boys’ veered-off the road.

Witnesses said the accident occurred at a sharp bend along Mayo-Belwa-Jada Road on Saturday morning, and attributed it to “recklessness and over speeding by two trailer-drivers”.

A witness, who simple identified himself as Mallam Jingi stated that;

We saw two trailers coming in the same direction in speedy manner; they were all trying to overtake each other. So in the process one of the drivers lost control.

We only saw occupants of the trailer tumbling on the ground; three died instantly and many seriously with broken hands and legs.

It’s very pathetic. This accident could have been avoided.

The incident occurred at about 11:15 a.m. this Saturday along Ganye road in a village calls Jilima.

Two trailer drivers were overspeeding during which one of the trailers skipped-off after losing control.

Both the dead bodies and those with injuries were hurriedly evacuated to mayo-Belwa cottage hospital. Some were critically injured.

Mr Ibrahim, who blamed the incident on reckless driving, said the bodies of the victims had been deposited at the Cottage Hospital mortuary in Mayo-Belwa.

Besides the five persons who lost their lives, 30 others, severely injured, are receiving treatment in hospital.

Many Feared Dead As Gas Plant Explodes In Delta (graphic…