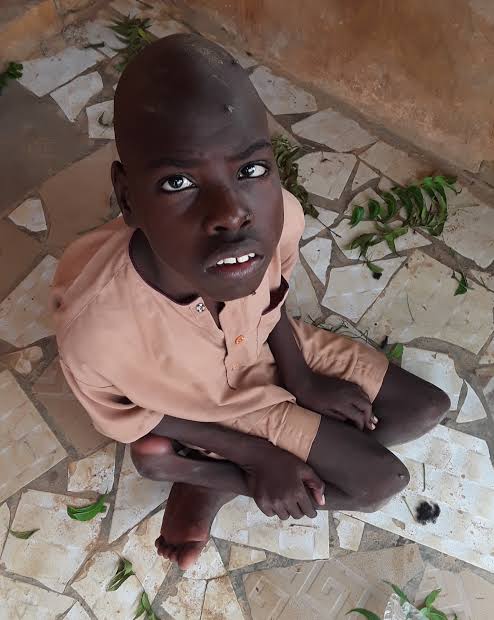 Katsina State Police Command have rescued a 16-year-old boy, Sadiku Umar, locked up in a cage for two years by his father, Salisu Umar, in Daura area of the State.

The rescue was facilitated by a non-governmental organisation, Save the Children International (SCI).

According to the man, he put his physically challenged son in the cage because of housing issues as there was no longer space in his two-bedroom apartment to accommodate his family of 15 people.

The victim was reportedly fed like a dog during his incarceration until last week when SCI intervened and reported the matter to the police.

His father was arrested and briefly detained before he was released, but not without a warning to refrain from the inhumane treatment of his son.

According to an SCI agent in Daura, Aminu Gambo;

The man told the police that he decided to put the boy in a cage because there was no longer space for him in the two-room apartment housing the entire family of 15 including his 12 other children.

He was detained at the police station in Daura for a day and then moved to the police headquarters in Katsina and later released on the condition that he would no longer subject the boy to such inhuman treatment.

SCI is working to see how it can accommodate Sadiku under its Reaching and Empowering Adolescents to make informed Choices for their Health (REACH) programme being implemented in Zamfara, Katsina and Gombe states.

It would not be the first time such inhumane treatment would be meted out on hapless victims.

In October last year, police discovered a rehabilitation/religious training centre in Daura, Katsina state where about 500 young men were chained, with some of them bring sexually abused.

A similar centre was discovered in the metropolitan area a few days later, where hundreds of youths were chained, and subjected to all forms of inhumane treatment.

Between July and August 2020, a number of incidents like this have been discovered through the help of human right organisations and police.

In February this year, a 30-year-old man, Samaila Musa, was arrested for chaining and enslaving his two wives in Rimi Local Government area of Katsina state.

On August 20, a 55-year-old man chained by his father for 30 years at Rogo LGA in Kano state was rescued by the police and a human rights organization.

The victim, Murtala Muhammad, a resident of Kofar Fada in Rogo Local Government Area of ​​Kano State, was said to have been chained up allegedly over his mental illness.