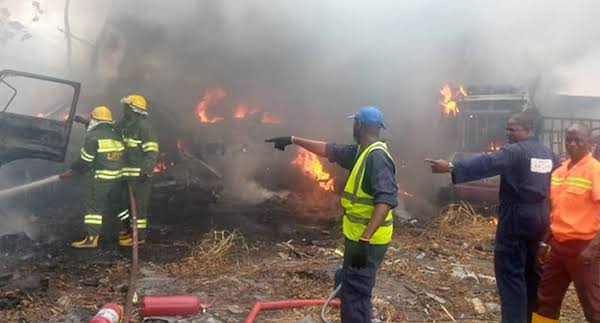 Fire has gutted a section of the headquarters of the Lagos State Traffic Management Authority, Oshodi in Lagos state on Tuesday.

LASTMA made this known in a statement by its Assistant Director, Public Affairs, Filade Olumide titled, ‘Minor fire incident at LASTMA headquarters’.

The fire outbreak is the second in the agency’s office in the last one month. A similar incident razed over 11 vehicles parked on the premises in August.

LASTMA General Manager, Olajide Oduyoye, was quoted as saying that the “fire was immediately put out”.

There was a minor fire incident at the LASTMA Headquarters today, September 22, 2020.

Immediately the fire was noticed on the air conditioner, the headquarters staff following the past fire drill training put out the fire.

The Fire Service were immediately summoned through a telephone call. The Lagos State Fire Service promptly responded to the call, put out the fire which was still slightly burning from the air conditioner, and ensured that the fire did not spread inside the office it occurred or the whole building.

The General Manager thanked members of staff and the firemen for taking prompt action thereby “averting the untold damage that could have occurred to the human and material resources of the Agency which could have been a setback.

He further enjoined all to always be at alert to the happenings in their environment at all times.