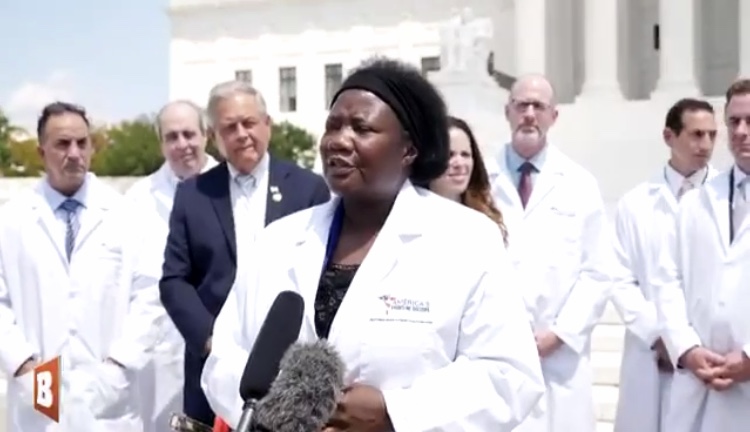 US-based Cameroonian doctor, Dr. Stella Immanuel who declared hydroxychloroquine as a ‘cure’ for coronavirus, was reportedly sued in 2019 after an alleged malpractice that led to the death of a patient.

According to the Daily Mail, the family of the victim named Leslie Norvell sued Dr. Stella Immanuel to court claiming her negligence resulted in the death of the woman.

Norvell reportedly said the needle had broken off in her arm while receiving methamphetamine drug.

The family said Norvell went to the Sabine Medical Centre where Immanuel was working and was given only medication.

No attempt was made to remove the needle fragment that had broken off inside her arm.

Both Immanuel and another doctor who attended to the patient failed to take a closer look at her arm or alert authorities, the report stated.

The lawsuit further stated that Norvell returned home but had to go to another hospital later because of excruciating pain.

The needle fragment was later removed in the other hospital, however she died six days later in February 2019 as a result of a flesh-eating infection in her arm.

Police were unable to serve the doctor with the lawsuit in April because she no longer worked at the medical facility.

The report said the police had no idea that Immanuel had moved to Texas, where she made the claim in a viral video that hydroxychloroquine is a valid coronavirus treatment despite global trials suggesting otherwise.

Immanuel was first licensed in Louisiana in 1998. She has no known complaints in Texas or Louisiana.

The 55-year-old Cameroonian in the video which has gone viral claimed that the anti-malarial drug would stop the COVID-19 in 30 days and she has treated over 300 patients with it.

Dr. Immanuel’s video message was shared on social media by President Trump, his son Donald Jr. and circulated in several formats before the platforms began to pull down some of the posts.

US president, before Dr Immanuel went to Texas for her controversial speech, said he is a ‘big fan’, adding that;

I was very impressed with her and other doctors that stood with her. I think she made sense, but I know nothing about her.