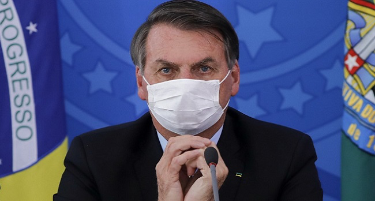 President of Brazil, Jair Bolsonaro has tested positive for the coronavirus after having an X-ray of his lungs on Monday.

Referring to his COVID-19 test, he said;

Everyone knew that it would reach a considerable part of the population sooner or later. It was positive for me.

Earlier on Tuesday, Bolsonaro’s press office told CNN Brasil that the President was being treated with hydroxychloroquine and azithromycin as he awaited the result of his fourth COVID-19 test in four months.

The far-right leader has caused huge controversy in Brazil for repeatedly flouting restriction measures and undermining the risk of the virus, which has killed over 65,000 people in the South American giant and infected 1.6 million.

The 65 year old President, who once described the virus as a ‘little cold,’ was wearing a mask while announcing his COVID-19 status.

CNN Brasil reported on Monday that the President said he was showing symptoms consistent with Covid-19, including a 38 degree Celsius fever (100 degrees Fahrenheit).

Last week, he attended a July 4 party at the United States Embassy in Brazil without wearing a mask and has previously been seen in public and at rallies without a mask, even hugging supporters.

He has encouraged the country to reopen, even as the number of cases rises, and has criticized local governments’ efforts to stamp out the virus through social distancing measures, such as quarantine and shelter-in-place orders.

Brazil is second only to the United States in numbers of coronavirus infections and deaths, which has 3,056,589 confirmed cases.

More than 65,000 people have died of the virus in Brazil, according to figures released by the country’s health ministry on Monday, and 1,643,539 cases have been confirmed so far.

Coronavirus tests remain hard to come by in the country and some local experts say the real number of people infected could be 12 to 16 times higher.