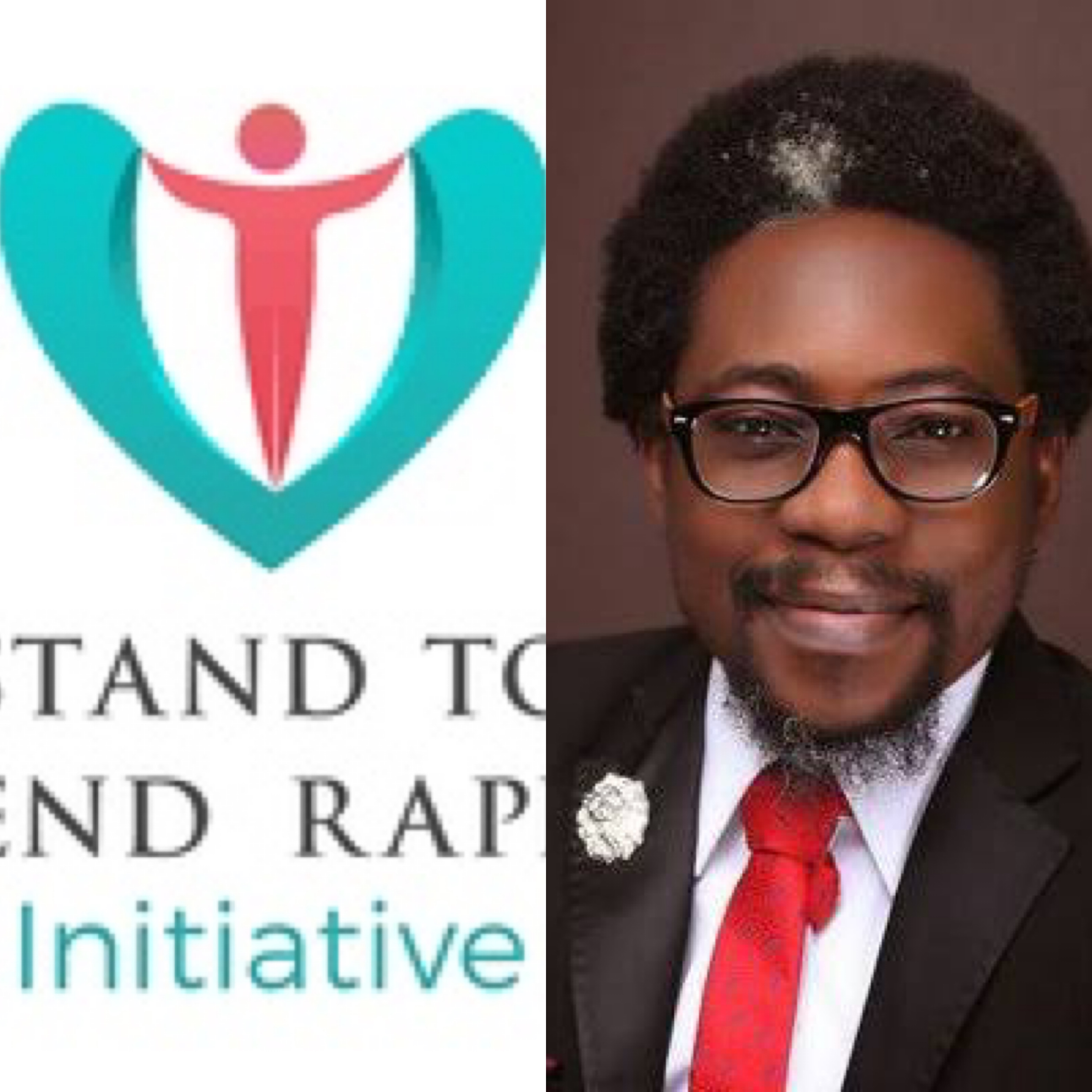 A non-governmental organisation, Stand To End Rape (STER) has accused a human rights activist Segun Awosanya better known as Segalink of spearheading the ‘private settlement’ of the alleged rape case between Seyitan Babatayo and singer D’banj.

STER was in charge of Seyitan’s welfare since the rape allegations were made public early June.

However, the police earlier today announced that the alleged victim have decided to withdraw the petition against D’banj on ‘personal reasons’.

The organization in a statement alleged that Segalink reached out to Seyitan to attend a meeting with D’banj at an address which he had texted to her.

The NGO said Seyitan’s legal counsel was also scheduled to be in attendance of the supposed meeting aimed at negotiating a ‘private settlement’ of the case.

STER stated that they were also invited to the meeting but declined because “out-of-court settlements go against STER’s policy.”

Such settlements, in our experience, often involve an asymmetry of power between the accused and victim. More importantly, while private settlements are usual in civil disputes, they are, however, not applicable to criminal cases, particularly where a felony has been alleged to have been committed. Only the State has the authority to discontinue a criminal investigation and prosecution.

An attempt by any private individual(s) to circumvent the authority of the State in criminal investigations may amount to a conspiracy and attempt to pervert justice.

The NGO, however, said Seyitan informed them on the 13th of July 2020 that a “non-monetary agreement was reached with D’banj’s team.”

It added that efforts to get Segalink’s reaction proved abortive as a call and text message sent to him were unreplied at the time of filing this report. 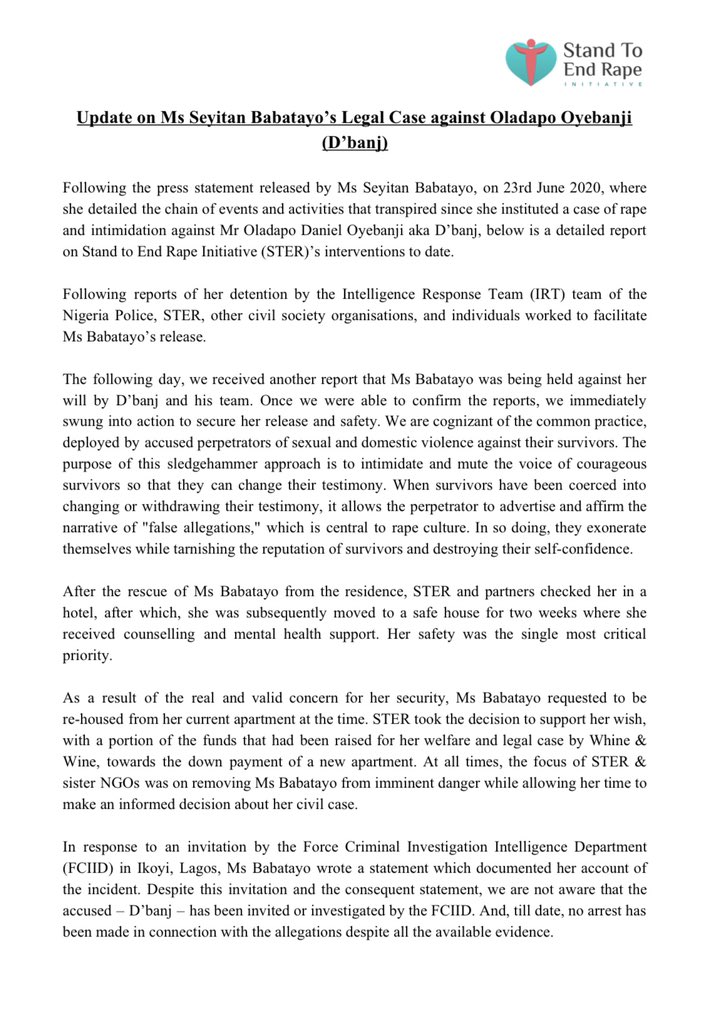 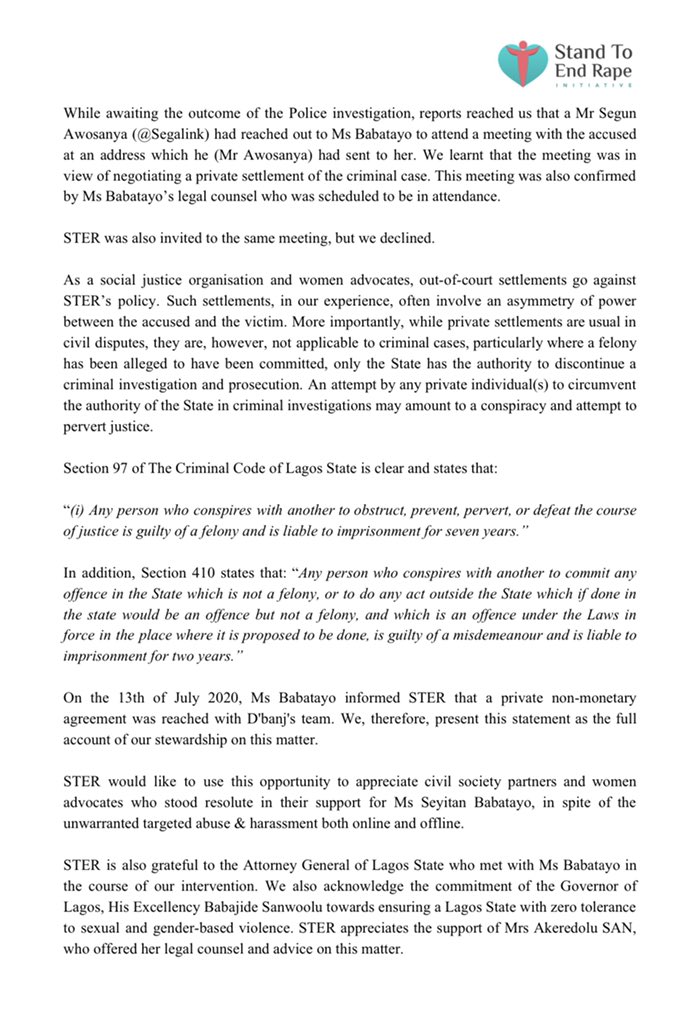 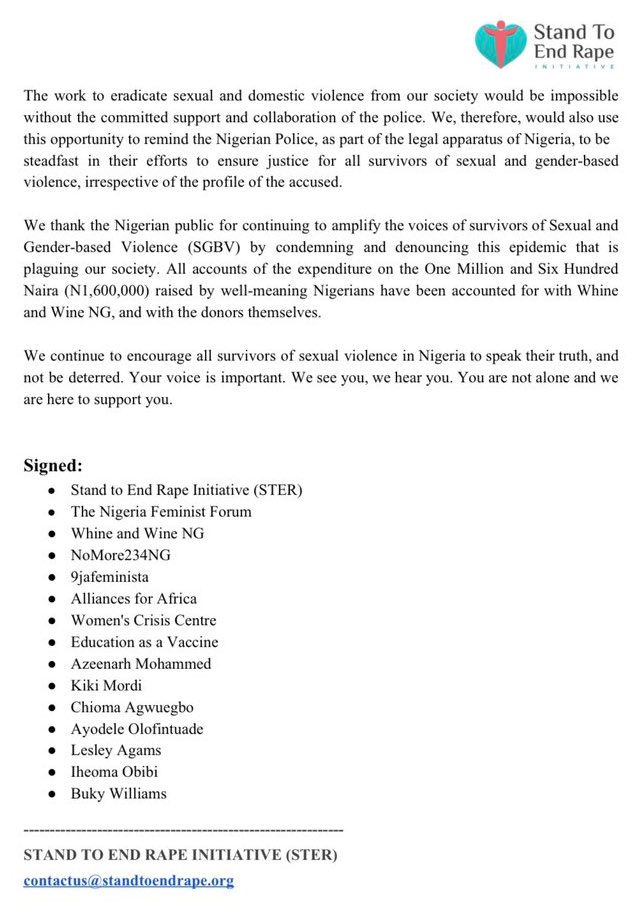 STER’s statement comes three weeks after Segalink in a series of tweets alleged that Seyitan was under “untold strain” and pressure from ‘e-feminists’ who were “hoping to push their agenda” through her situation.

The vicious & hateful approach of some interests (BMC & e-Feminist Coven) on this matter at the expense of Seyitan’s wellbeing must be condemned by All. The malicious interest group erroneously believe that Seyitan’s reluctance in taking their orders, was connected to me as proven by their numerous statements via Twitter trolls & ghouls under the pseudonym of e-Feminists (recently re-christened as Feminist Coven).

The family also reiterated and distanced themselves from the unfounded allegations pushed by those hoping to traffic their agenda through her situation.

He also stated that Seyitan and her family were not interested in pursuing the case or a “legal battle”, before the involvement of STER or police.