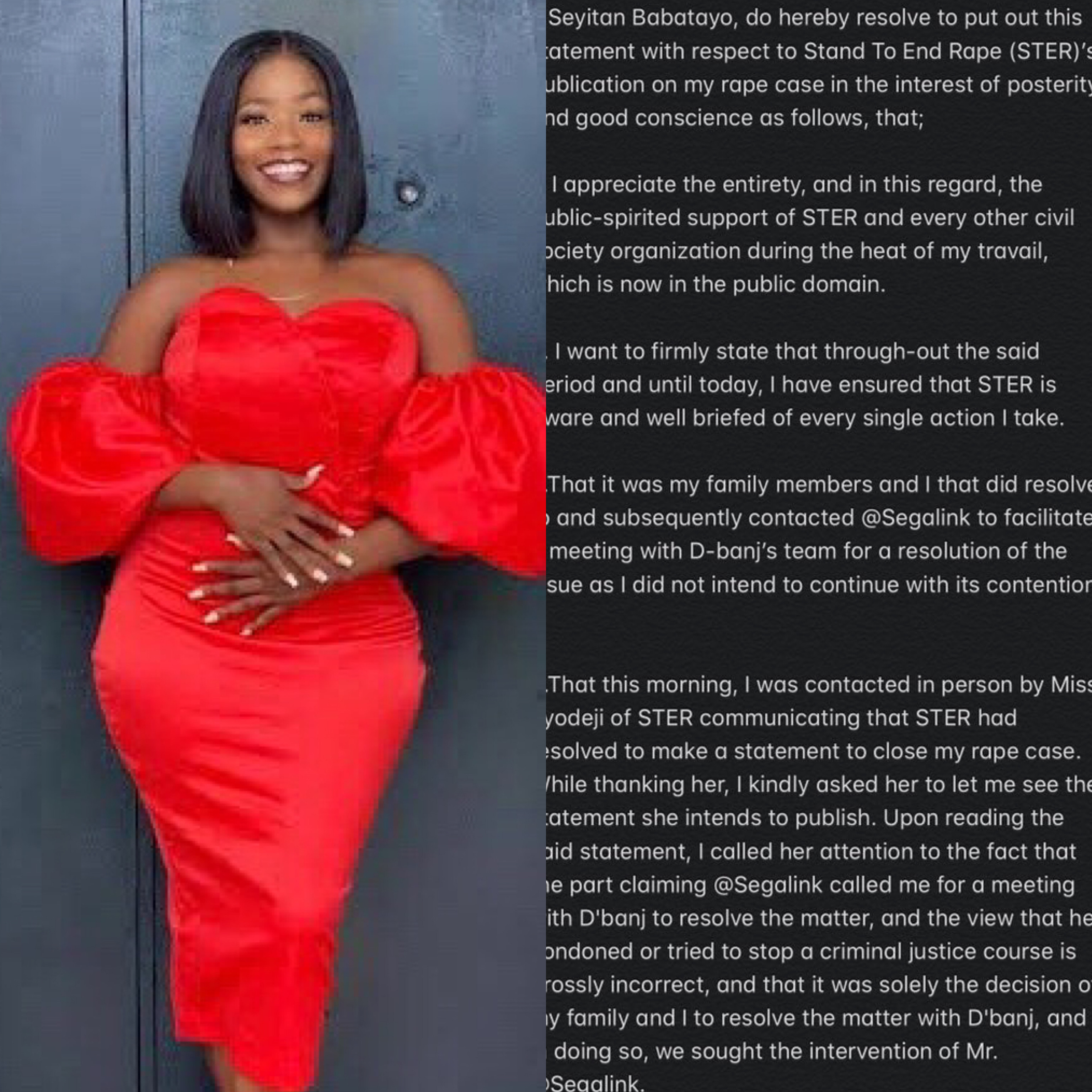 Seyitan Babatayo, the lady who accused singer D’banj of rape, has released an official statement addressing an earlier publication of Stand To End Rape (STER) regarding activist Segun Awosanya’s involvement in the alleged rape case.

MDB earlier reported that the young lady withdrew her petition against the singer on grounds of personal reasons.

However, shortly after a non-governmental organization, STER released a statement alleging that a human right activist, Segun Awosanya better known as Segalink spearheaded a ‘private settlement’ that resulted in Seyitan withdrawing her petition.

The NGO also alleged that Segalink contacted the lady in an attempt to ‘pervert justice’.

However, Seyitan in a two-page statement has now addressed this allegation, giving further clarification about the alleged rape case and the duties of those involved.

I, Seyitan Babatayo, do hereby resolve to put out this statement with respect to Stand To End Rape (STER)’s publication on my rape case in the interest of posterity and good conscience as follows, that;

I appreciate the entirety, and in this regard, the public-spirited support of STER and every other civil society organization during the heat of my travail, which is now in the public domain.

The lady added that;

I want to firmly state that through out the said period, and until today, I have ensured that STER is aware and well briefed of every single action I take.

Seyitan revealed that herself and family members contacted Segalink to facilitate a meeting with D’banj’s team for a resolution of the issue as she did not intend to continue with the contention.

According to the lady, she was contacted by the founder of STER, Ayodeji Osowobi and had resolved to make a statement to close the rape.

She requested to read the proposed statement but upon going through it, she called the attention of Osowobi to a part that alleged that Segalink called for the meeting with a view to hinder justice.

Seyitan stated that that statement was grossly incorrect, pointing out to Osowobi that it was the sole decision of herself and family to resolve the matter, seeking the intervention of Segalink.

The lady then apologized to Segalink for any damage the erroneous statement made by Ayodeji Osowobi through STER may have caused, appealing to the NGO to make corrections. 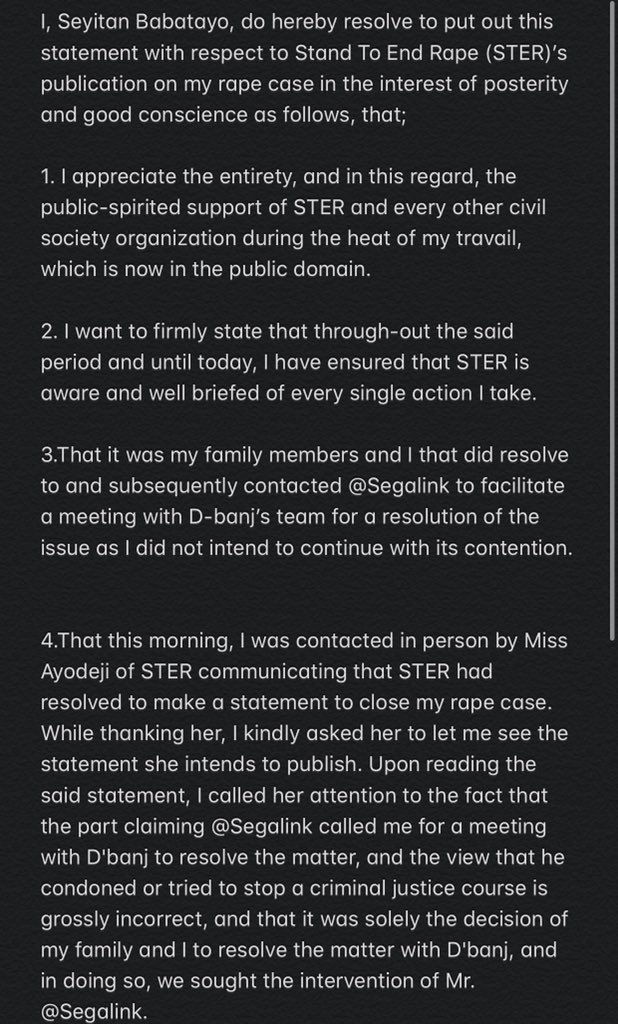 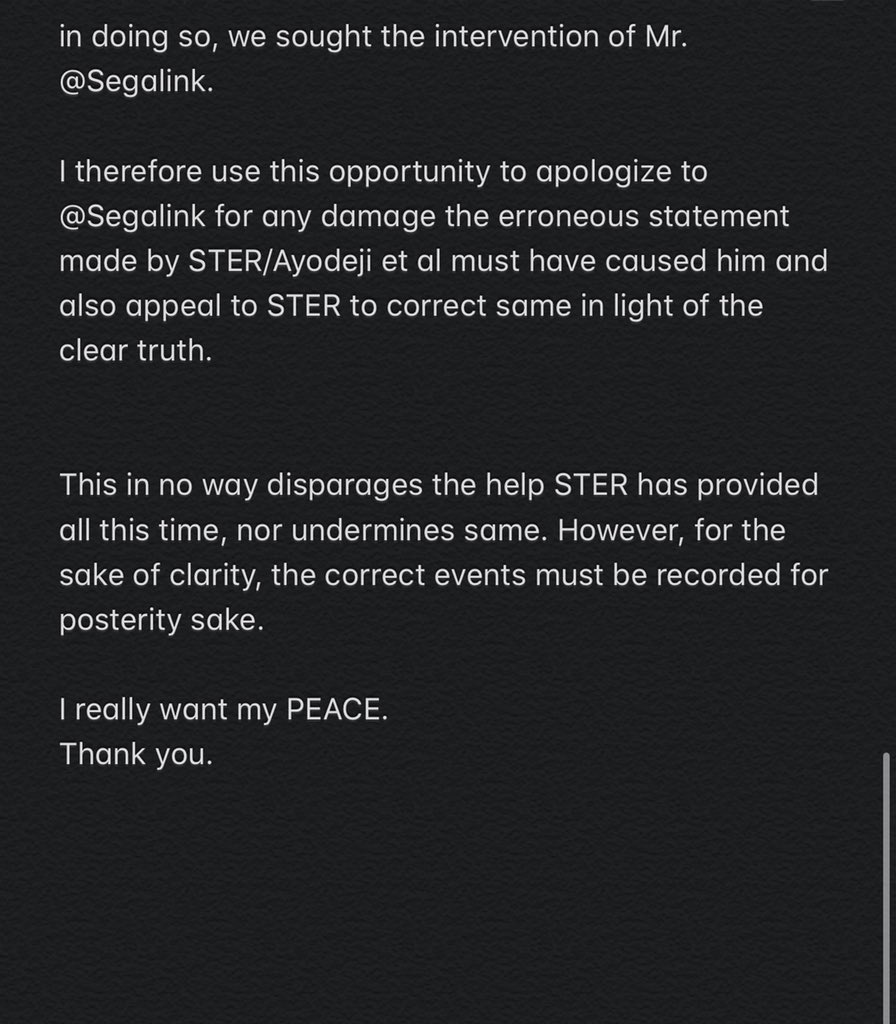