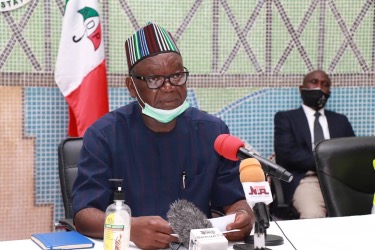 Benue State Governor, Samuel Ortom has sympathized with families of the victims of a boat mishap that occurred while crossing River Benue.

Twenty-one persons have been declared missing after a boat they were travelling in capsized in River Benue.

Reports say 23 passengers were on board when the boat sank midstream but two persons were rescued.

The boat was conveying mainly members of the ECAN Church Ijaha in Makurdi Local Government Area to a convention across the river when it sank at Kwaghtan Sule in Guma LGA on Sunday, July 5.

According to reports, the canoe was filled beyond its capacity, as it was meant to carry not more than 15 passengers.

The Governor described the incident as painful and unfortunate.

Ortom said marine police personnel were immediately deployed to the area, assisted by local divers in rescuing the victims.

The Governor urged members of Kwaghter community, where the incident took place, to cooperate with the rescue team to enable them to find the missing persons.

He reminded Benue people about 2020’s weather predictions on torrential rains and advised that those who travel by water should employ all safety measures to avoid unforeseen incidents.

Governor Ortom enjoined Benue residents to always observe COVID-19 prevention measures by staying away from crowded places to curb the spread of the disease.