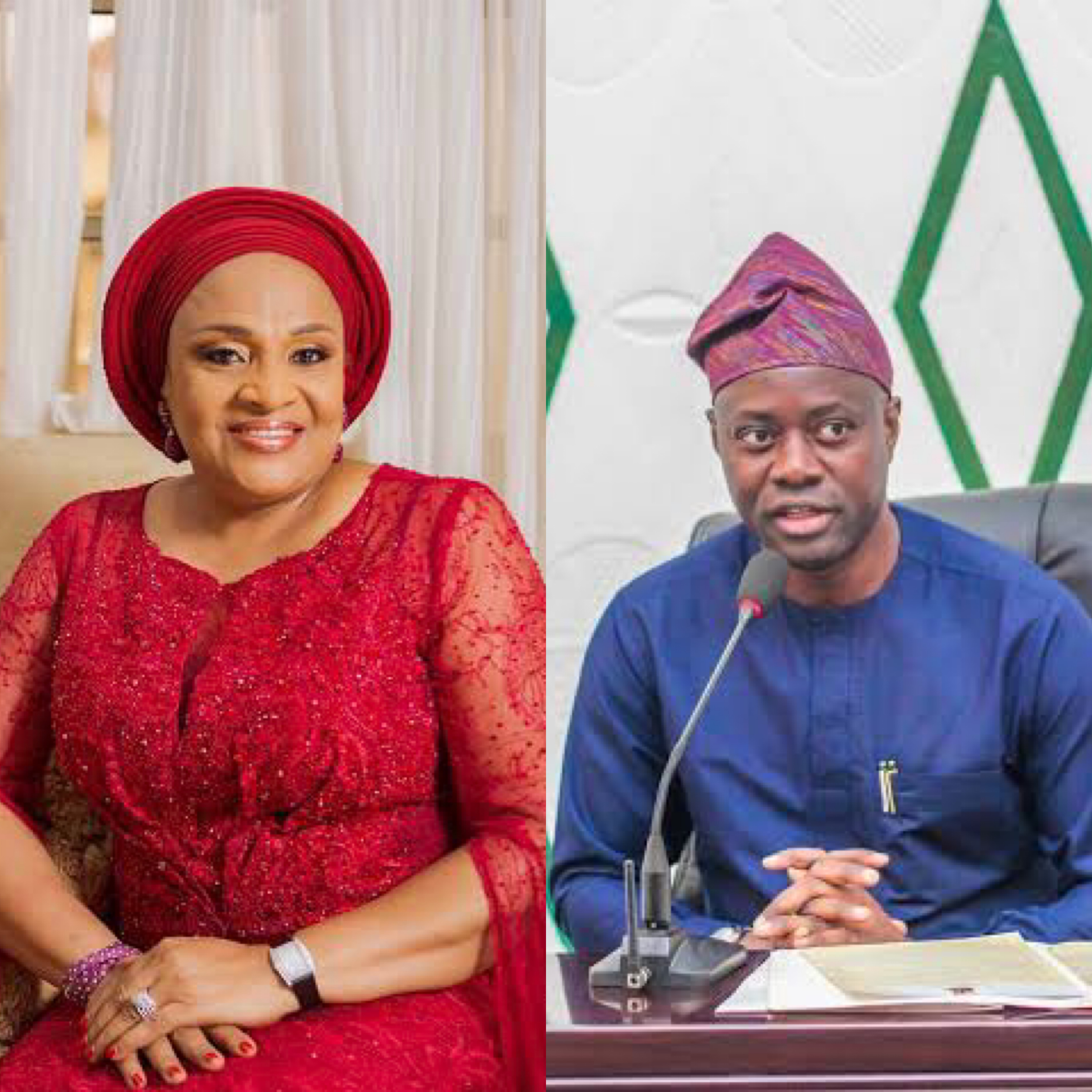 Late Abiola Ajimobi’s wife Florence Ajimobi, has accused Oyo state deputy Governor Seyi Makinde of playing ‘dirty politics’ with the death of her husband and not contacting her to provide any form of support during the illness of Ajimobi or even after his death.

The widow made her feelings known when she received a delegation led by the Oyo Deputy Governor, Mr. Rauf Olaniyan at their Oluyole residence.

Other delegations and Governors were also present at the scene.

The former first lady, who spoke for the first time since her late husband fell ill about a month ago and died last Thursday, said she is speaking because of misgivings surrounding the death of her husband.

She alleged that Governor Seyi Makinde lied about speaking to her on the phone to commiserate with her family over the loss of her husband.

Although I should not be the one speaking but I just want to clear the air on a lot of misgivings that has been spreading.

On behalf of my late husband, children and the entire Ajimobi’s family, I want to sincerely thank you for all your support at this very crucial point of our lives.

My husband is not a very difficult man but thank God we are here today. For me, when things like this happen, I want to pick up something. It is a time for everyone of us to reflect on our lives because death is a necessary end. It will come when it will come. We do not know who is next and we don’t know when our time will come.

Either you are a Christian or a Muslim, both religions teach love and peace and I am glad that the Deputy Governor of Oyo State is here because I need to put some records straight. It is the first time I’m going to make any public announcement or statement since my husband actually died.

I opened the papers a couple of days ago and I saw the Oyo State Government writing a lot of things.

Your Excellency, the Deputy Governor of Oyo State, for the avoidance of misinformation to the public and damage to the image of my husband, he was a peace-loving person. He lived for peace passionately.

My husband took ill on the 22nd of May and he was hospitalised and I was reading in the papers that the Governor of Oyo State, His Excellency Seyi Makinde, claimed he called me. But he did not.

It is important we put the records straight because this is a family of politicians and I do not want anybody to tarnish my husband’s name and well my husband is gone. It could be me or anyone else tomorrow.

Life in itself is vanity upon vanity. Either you are PDP or APC, the man is dead and he has been buried.

The Governor did not call me. Even if he had called me and I did not pick his calls, I do not have his number and I have never spoken with him on the phone. He could have sent me a text message for record purposes.

And then today again, I read in the papers and saw how the Ajimobi’s family was lying about something again.

Mr Deputy, my husband never had anything against the Governor or anyone else. We were in different parties but he was an elder stateman and he slept on the ground.

The Governor of Oyo State never called me nor sent a condolence message, my husband was hospitalised for one month. What politics are we playing, please?

Life is short, I am a Christian and my husband is a Muslim, we all should let the fear of God guide us in whatever we are doing. Ajimobi is gone today. Whatever he does does not matter to me. It does not matter to me as his wife and his widow. I am going to mourn and respect my husband’s wishes and that was what I did today, laid him to rest peacefully.

I do not want any controversy. Everything I read in the papers, I just swallowed them all and let it go. So, please, the press are here, we never had any rift with the Governor with the state government. I never dialogued with them. I never contacted them nor sent them a word because I did not know it was necessary for me to send official messages that my husband was hospitalised.

I think the least anybody can do, as a God-fearing person, is to send me a word of encouragement at that time. And even after he died, not even you, Mr Deputy Governor called me.

At that point, the deputy governor interjected saying, “I called you.”

To which Mrs Ajimobi replied;

You should have sent me a text message. I do not have your number. I am the wife of a politician, I do not pick numbers I do not know. You can send a message. Everybody is going to die. My husband is dead, and he served this state for eight years. What are we talking about! Are you saying he did not contribute anything to this state and you could not honour him for a second?

Other governors present had to wade in asking both sides to maintain the peace.

The man is dead and I need to put the record straight. I do not want anybody, any government to tarnish my husband’s image. He was a peace loving man. And he played his role and he is gone.

Nobody can be on the stage for so long. You come, play your roles and you leave. Somebody else comes. I pray for Governor Seyi Makinde to succeed because that is the only time I would say that my husband succeeded.

So, please let’s put the record straight. I never had any interactions with Governor Seyi Makinde, he did not contact the family and that is the fact. His deputy Governor is here, he did not even send me a text message and I do not have your number and I do not pick calls from numbers that I do not know. So, please let us stop dirty politics.

However, the quick intervention of Kano Governor Umar Ganduje, who quickly called for prayers for the repose of the soul of the late Governor, put the matter to rest.

This comes as an address to controversy surrounding the burial ceremony of the late Senator.

There were reports that the Oyo state Government disapproved a certain location in Ibadan where family of Ajimobi chose to bury him over existing litigation on the property.

According to reports, this led to the late burial ceremony of Abiola Ajimobi, who was eventually laid to rest on Sunday, three days after his death.