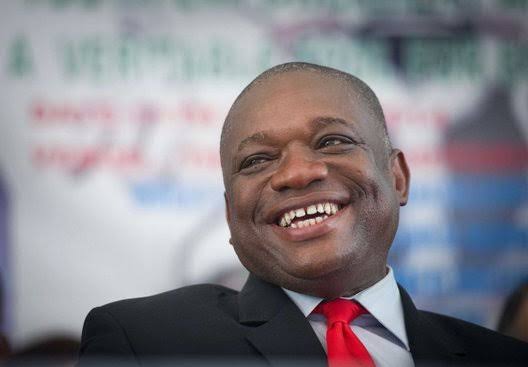 Senator Orji Uzor Kalu, has resumed legislative duties as Chief Whip of the Senate on Tuesday, six days after his release from prison over alleged fraud.

The former governor of Abia State had been in jail for six months after being convicted and sentenced to 12 years imprisonment for money laundering to the tune of N7.1 billion by Lagos federal high court.

Senator Kalu arrived at the Senate wing of the nation’s parliament at exactly 9:00 am, the PUNCH reports.

Upon his return to the Senate on Tuesday, Kalu was seen exchanging pleasantries with his colleagues, legislative staff and security operatives.

Speaking with journalists at the entrance to the Senate chamber, Kalu described his prison experience as a good one.

I just want to thank God for everything that has happened. It is the will of God. I want to urge Nigerians to keep hope alive.

Kalu, however, did not resume his duty as the chief whip, as the deputy chief whip, Sabi Abdullahi, still acted in his stead.

It would be recalled that the Senator, who stood trial alongside Ude Udeogu, a former director of finance and account in Abia, was sentenced to 12 and 10 years imprisonment respectively by Justice Mohammed Idris.

However, on May 8 2020, the Supreme Court, in a unanimous decision by a seven-member panel led by Justice Amina Augie, held that the Lagos Federal High Court lacked jurisdiction to convict Kalu and Udeogu.

The apex court verdict did not include releasing Kalu from prison in the overturn of his conviction.

His counsels, therefore, filed an appeal before the Lagos federal high court for Kalu’s release.

In a judgement read by Justice Mohammed Liman at the Lagos court, the correctional centre was ordered to release Kalu from its Kuje facility in Abuja last Tuesday and he was released the next day.

Watch a video of Orji Uzor Kalu being welcomed at the Senate;

BREAKING: Senator Orji Uzor Kalu returns to the Senate and resumed his duty as the Chief whip. pic.twitter.com/IG1nq18vEd