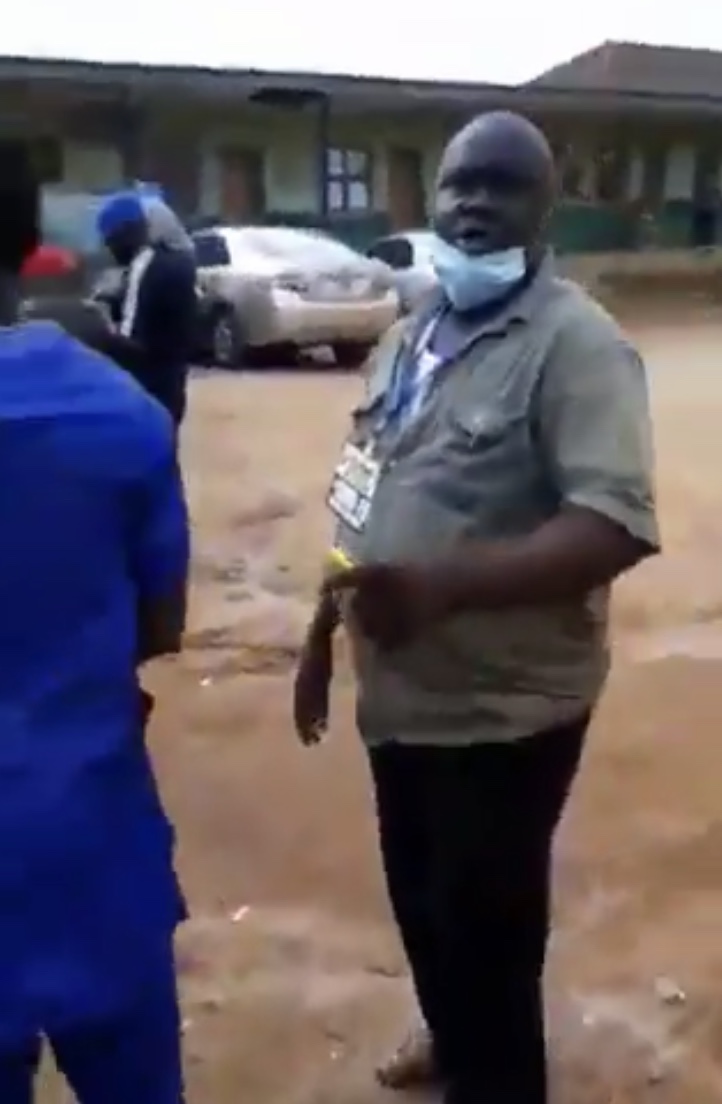 Officials who were enforcing a lockdown order which led to an assault on a woman at the Ifo local government office in Ogun state have been suspended.

A Twitter user, @TeeBaibie, had posted a video of the local government officials trying to deflate her tyres on Saturday at Ojodu Abiodun area.

Lagos and Ogun states share very close borders, which most times are not clearly marked, therefore crossing over to another without being aware often occur.

While Lagos has relaxed total lockdown for all days of the week, Ogun state still enforces lockdown on Saturdays and Sundays.

According to the woman, she had gone out with her husband to get some items for her daughter’s forthcoming birthday on Saturday when she was stopped by the officers.

However, things escalated when the lady filming the incident tried to ask the exact location of the local government office from a man, who was later identified by her as Mr Peter.

As she followed him arguing about the incident, Mr. Peter physically assaulted the woman with people rushing to help the woman.

This afternoon, on my way to #justritestores in Ojodu to buy a bicycle for my daughter whose 7th birthday is in 2 weeks, A THREAD@OgbeniDipo @segalink @jimidisu @dabiodunMFR pic.twitter.com/upbRiEMhRR

The Ogun state government had responded to the video on Saturday, with a promise to investigate the “unpleasant development and sanction anyone that is culpable”.

In the latest development, Fola Salami, the transition chairman of Ifo local government, in a statement said the officer who assaulted the woman has been arrested, while other officers involved in the incident have been suspended until further notice.

The attention of the Office of the Transition Chairman, Ifo Local Government, Ogun State has been called to a viral video that suggests a case of assault on a lady at Ojodu Abiodun Area of the Local Government.

It came as a rude shock to me, when I saw the video of one of our officials enforcing the lockdown order with gross inhumane attitude. His attitude does not portray the humane nature popularly preached by Ifo local Government.

On this note, I am suspending all officials involved without pay, until further notice. Rest assured, the public should be aware that all hands are on deck on this issue and whoever is found guilty will be dealt with decisively.

Meanwhile, as at the time of this release, the primary official involved has been arrested.

The incident had sparked reactions from many Nigerians who called on the state government to intervene and get justice for the woman.

Police Arrests Man For Killing Children With Pestle In Anambra