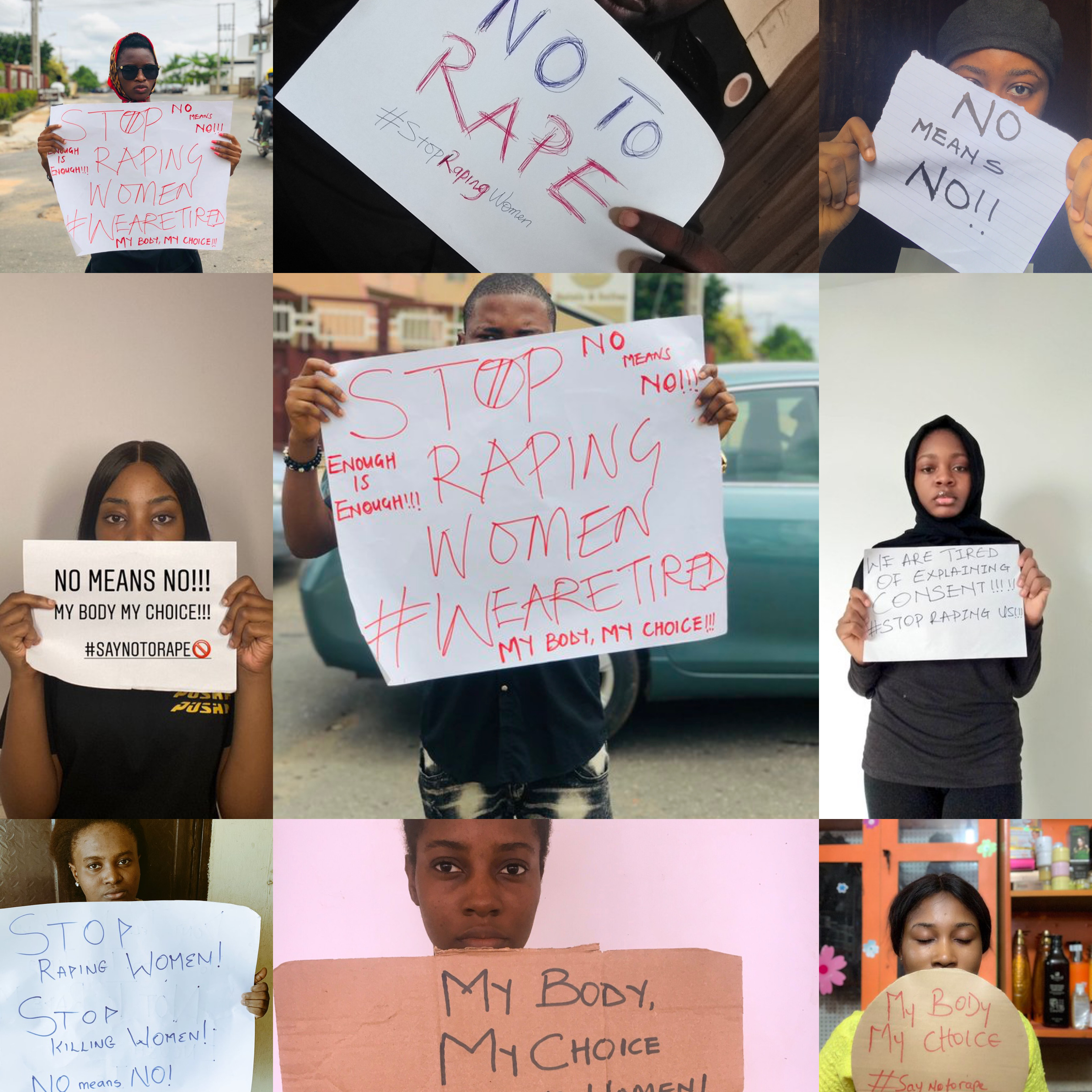 Following reports of rape incidents over the past few weeks in Nigeria, a virtual protest against rape tagged #StopRapingWomen has now commenced.

Some of the rape incidents recently reported have resulted into the death of victims, who were gruesomely killed by their attackers.

It would be recalled that Vera Uwaila Omozuwa, a 22-year-old 100-level student of Microbiology at the University of Benin, Edo State was raped and brutally killed by unknown assailants in a Redeemed Christian Church of God (RCCG) where the victim went to read.

Omozuwa died after being raped and smashed in the head with a fire extinguisher in the church located at Ikpoba Hill area of Benin City, the state capital.

MDB also reported the rape of a 12-year-old girl by 11 men at Limawa quarters in Dutse Local Government Area of Jigawa state.

Similarly, a 9-year-old girl was allegedly raped by her father in Ibadan, Oyo state.

Many Nigerians in solidarity through the virtual protest are now demanding for the intervention of Federal and State governments and security operatives in the recent and recurring happenings.

My first ever campaign against rape was in April 2016 when I & other bloggers used the medium of storytelling to stand against this hideous crime. It’s sad we are still on this path 4years down the line but we won’t stop speaking. SAY NO TO RAPE #JusticeForUwa #WeAreTired pic.twitter.com/RsuUNpFvyA

I know the pain. I feel the pain. As a mother I cannot look the other way. Let’s stop targeting women. Women are not preys. The girl child needs protection from all of us. Time for men and women of age and responsibility to stand up. #StopRapingWomen #stopkillingourchildren

I am Uncle Wilson

So this gbola lives in mowarid hostel around unilorin school gate.‍♀️‍♀️
This rapists are around us, walking like they are normal but they are mad people.
One day your end will come and there will be no one around to help you. #JusticeForUwa #StopRapingWomen #WeAreTired pic.twitter.com/iS2gEEvvYF

NO IS NO
NO IS NOT MAYBE

STOP IS STOP
STOP IS NOT CONTINUE

we need a system that fights for us!
we are tired of constant raping and killing of women!
it has to end!
we are tired of being afraid!#WeAreTired #StopRapingWomen #wematter #JusticeForUwa @oluwapelumi_ii @jidesanwoolu @segalink @IyawoThickaBody pic.twitter.com/mBuLnmPz3S

I just want to Live and not look over my shoulder every time, because I am a woman and because I have a vagina. I have dreams of my future! STOP KILLING AND RAPING ME!!! pic.twitter.com/mUael94IHB

Being female is not a crime.
Stop raping our sisters and mothers and daughters.
We are not objects to satisfy your incessant libido.
We are humans, our lives, pride and sanity matter.#justiceforjennifer#StopRapingWomen#JusticeForUwa pic.twitter.com/qGXxY9XOth

This is really getting out of hand! PLEASE #StopRapingWomen pic.twitter.com/DS4Udnwpt9

Educate your friends about consent, do not support or entertain stories about rape or other forms of sexual harassment. Do not make rapey jokes. It’s not enough to not be a rapist, for your sake and the betterment of society at large, be an anti-rape agent also. #StopRapingWomen

I’m not Nigerian! Not Canadian! Not Ghanaian! I’m black and a #GlobalCitizen. Until we all start to see each other as same, and see the world as one place, we will continue to treat each other with so much hate. #BlackLivesMatter #JusticeForUwa #JusticeForTina #StopRapingWomen

Join the virtual protest, Say No To Rape!

WeAreTired: Tiwa Savage, Adesua Etomi, Asa, Others Lend Their Voices To Demand End Of Killings, Rape In Nigeria
“He Must Be Found And Arrested” – Twitter Users React To Viral Video Of Man Molesting Lady During Trip From Abuja To Akure