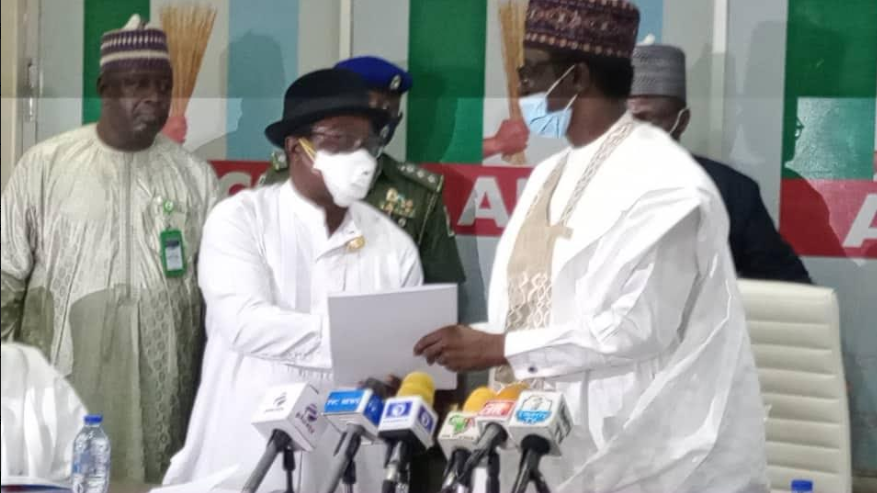 Former acting National Chairman of the All Progressives Congress (APC), Mr Victor Giadom, has officially handed over affairs of the party to the chairman of Caretaker Committee, Governor of Yobe state, Mai Mala Buni, following the recent dissolution of National Working Committee (NWC).

The handing over ceremony held on Monday at the APC National Secretariat in Abuja, the nation’s capital.

It would be recalled that President Buhari during an APC emergency National Executive Council (NEC) meeting on Thursday dissolved the NWC and created the Caretaker Committee.

The NWC was dissolved as a result of crisis that plagued the party emanating from the suspension of the former National Chairman of the party, Adams Oshiomhole.

Subsequently, Victor Giadom appointed himself and took over the helm of affairs as acting National Chairman. In a counter move, a faction of NWC appointed former Governor of Oyo state, Abiola Ajimobi, who is now late, as the right acting Chairman, sparking further drama and litigations.

However, in the new development, Giadom has handed over to the Caretaker Committee, assuring members of the committee of his readiness to support and work with the team towards the realisation of the party’s goals.

He also commended President Muhammadu Buhari and the leadership of the National Executive Committee (APC) for rescuing the party from crisis.

I Chief Honourable Victor Giadom the outgoing acting national chairman, today Monday 29th of June 2020 hands over to the chairman and members of the national caretaker committee of the All Progressives Congress.

I assure the committee of my readiness to partner with them to achieve the party goals and objectives towards a successful national convention. I pray that the almighty God grants you wisdom to pilot the affairs of the party.

On his part, Governor Buni appealed to aggrieved APC members with pending lawsuits to withdraw them.

I urge all party members to heed the appeal by our leader, President Muhammadu Buhari (GCFR), on his call to all aggrieved members who have instituted various cases in courts to please withdraw such cases in the interest of our great party.

According to the Yobe State Governor, the happenings within the APC in the last few months are not totally strange in a big political party.

He added that internal disagreements are common in all political parties and the APC was not an exception.

It is time for this committee, therefore, to commence the process of true reconciliation among leaders and members of the party at all levels. It is our belief that the decision by NEC to constitute this committee will mark the beginning of a new chapter in our great party.

This appears to be the end to the crisis that has rocked the All Progressives Congress (APC) in the past few weeks.