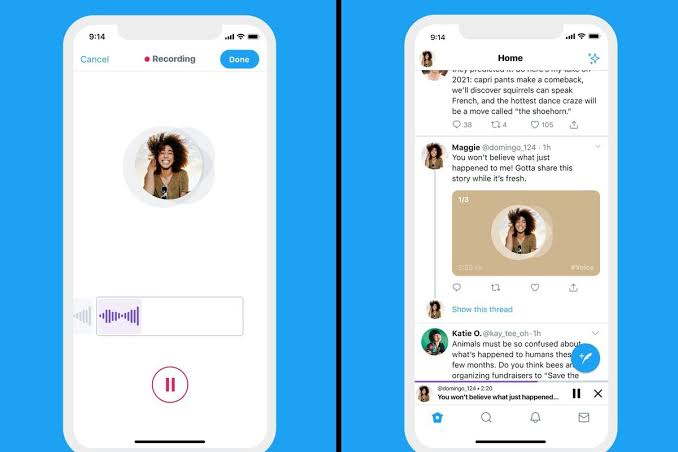 Micro-blogging social platform, Twitter, has announced the introduction of a feature — audio tweets — to its platform, allowing users share thoughts in audio form.

The company made the announcement on Wednesday via Twitter saying;

Rolling out today on iOS, you can now record and Tweet with audio. pic.twitter.com/jezRmh1dkD

It stated that it is rolling out the feature to record audio snippets and attach them to tweets.

The new add-on is available first on iOS devices and launched on Wednesday for a limited group of people.

Sometimes 280 characters are not enough and some conversational nuances are lost in translation. So starting today, we are testing a new feature that will add a more human touch to the way we use Twitter — your very own voice.

However, audio can only be added to original tweets and not replies or retweets with a comment.

Another minor thing to note is that whatever your profile picture is when you record an audio clip will always be attached to that audio tweet.

Your current profile photo will be added as a static image on your audio attachment and will not refresh if you update your profile photo.

The announcement has since sparked funny reactions from many Nigerians.

I don’t even have the choose who can reply feature talk more or Twitter VN. E b things o.😫😬😀

After sending twitter VN and you realise your mum’s voice was in the background, screaming at you for not flushing since morning pic.twitter.com/GRvO3OdiHY

The good thing about this Twitter VN feature is that some people wey you no rate before, you go come rate them cos their voice too fineeee

With this Twitter VN feature, threads are going to be obsolete.

Just imagine tweeting something against Wizkid or Tacha and their fans come out en masse to rain curses on you with Twitter VN. Omo, iku deeee 😂 😂

Football banter with Twitter VN. Many people will deactivate their accounts.

How long before “H factor” starts trending? Lol. Twitter VN is just an extra layer of bants and Wahala on this app.

Let me hear your voice babe

No, I have cough and cattarh 😬

My own Twitter VN should better come with autotune.

Thanks to Jack for updating Twitter VN, anybody who disrespects wizkid I will insult the person father in yoruba. pic.twitter.com/RnU6ID8mSJ

Some Nigerians using the app have sampled the audio tweets feature.

Listen to some below;

How my Twitter VN will be every night after taking @Jalinherbal
pic.twitter.com/eMBZaLK4Se

The update comes two days after CEO of Facebook, Mark Zuckerberg, announced that its sister app, WhatsApp has launched its payment platform, WhatsApp Pay in Brazil.

The move comes as Facebook pushes ahead with plans to bring more e-commerce to its platforms.

WhatsApp Pay allows users to send money to one another for free or make purchases from small businesses.