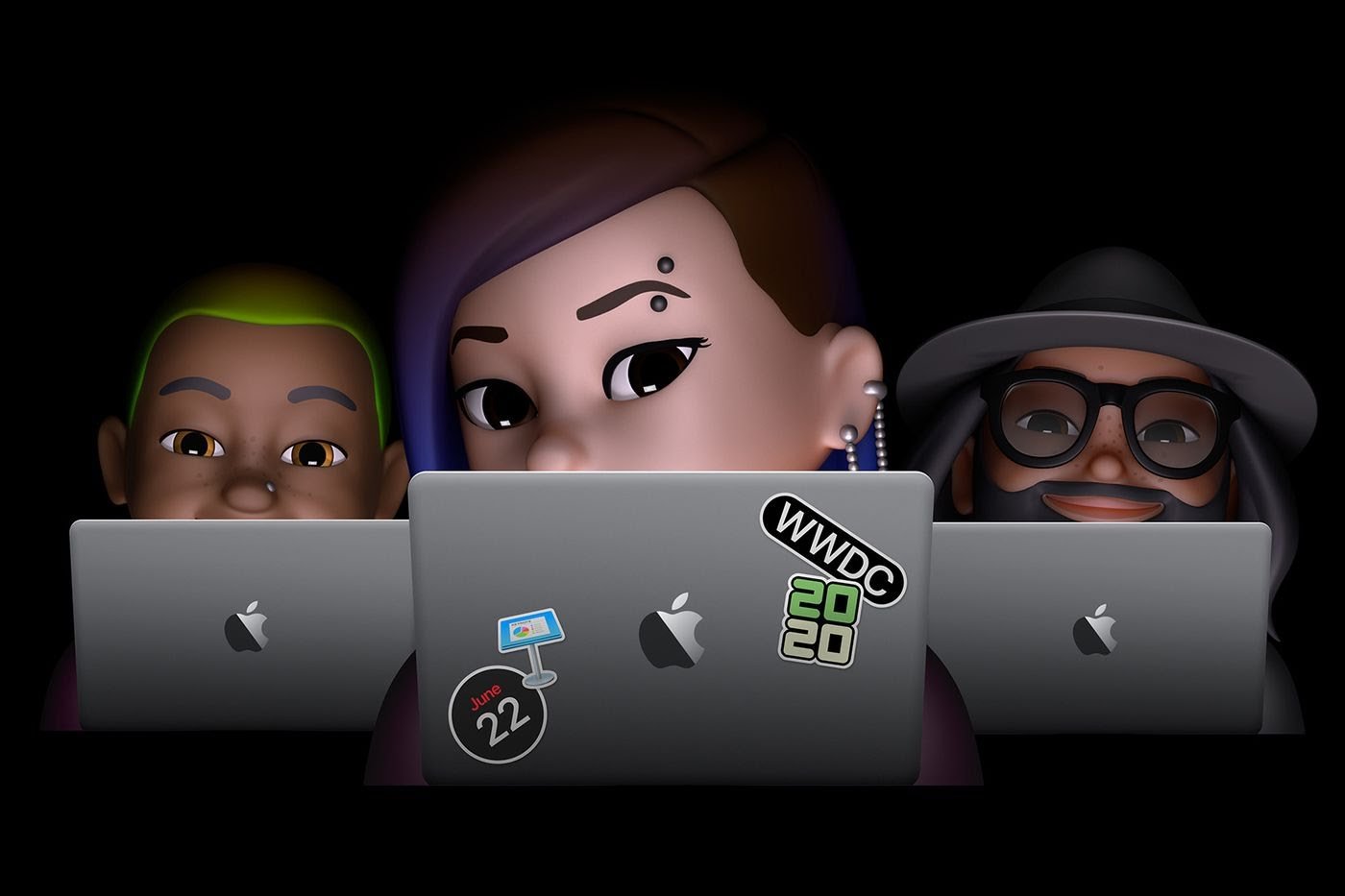 Apple’s all-virtual Worldwide Developers Conference (WWDC) has kicked off with the unveiling of the details of the new iOS 14, the next major version of iOS that is going to be released later this year.

The conference which usually attracts attendees in hundred was hosted virtually due to the ongoing global coronavirus pandemic.

In the iOS 14, the most visual change is that the home screen is getting widgets.

This year, we spent time rethinking the iconic experience of the iPhone. We have rethought some of the core elements of iOS.

The iOS 14 widgets, lets users — finally — surface data from within apps in the form of resizable widgets that sit on the homescreen.

Before, iOS only allowed for widgets in the Today View, but not on its main screen.

In another more radical change, Apple introduced the concept of App Clips, which are designed to help clean up the mess of icons on iPhone’s home screen. 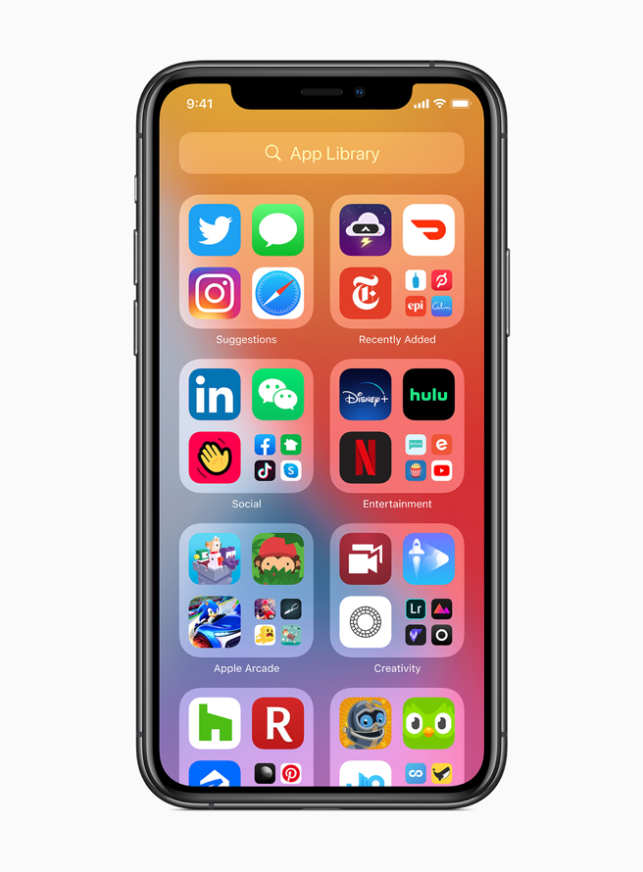 With iOS 14, users can opt to have iPhone’s software organize their apps for them instead of manually moving them around into folders.

The feature will benefit those who now have multiple pages of apps, and often forget where they have organised them on back screens

Widgets come in a variety of sizes and can still be viewed in the Today view, but in iOS 14, Apple allows widgets to be added to the main Home screen to live right alongside your apps.

To add them, there is a new “widget gallery” where users can easily add and customize widgets.

There is also a new “Smart Stack” widget that automatically shows relevant apps based on the time of day.

Also, incoming phone calls and FaceTime calls will also appear with a less obtrusive new pop-up, instead of taking over the entire screen. 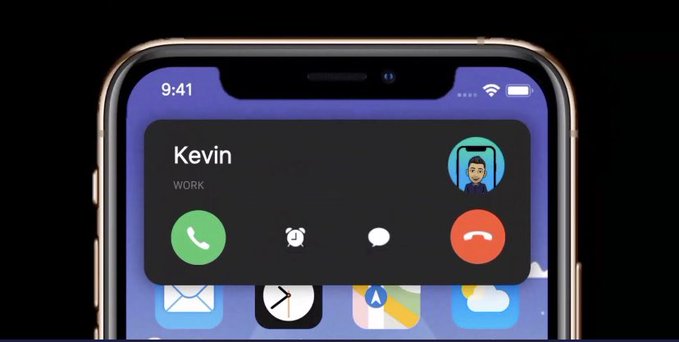 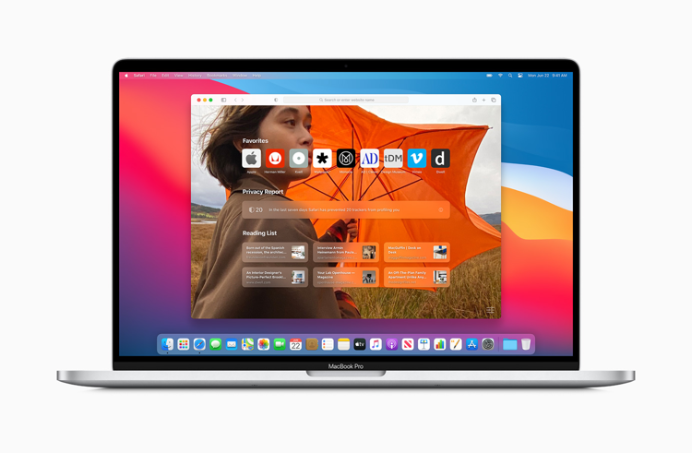 Safari, already the world’s fastest desktop browser, gets its biggest update ever, bringing even faster performance and new features, all while protecting user privacy.

Users can customize the new start page with a background image and sections like their Reading List and iCloud Tabs, and further personalize their experience with improved support for extensions.

The Mac App Store makes it easy to discover and download great Safari extensions with a new category that includes editorial spotlights and top charts.

Instead of pages of apps, the new App Library offers a new space at the end of your homescreen where all your apps are organized in a one simple and easy to navigate view. 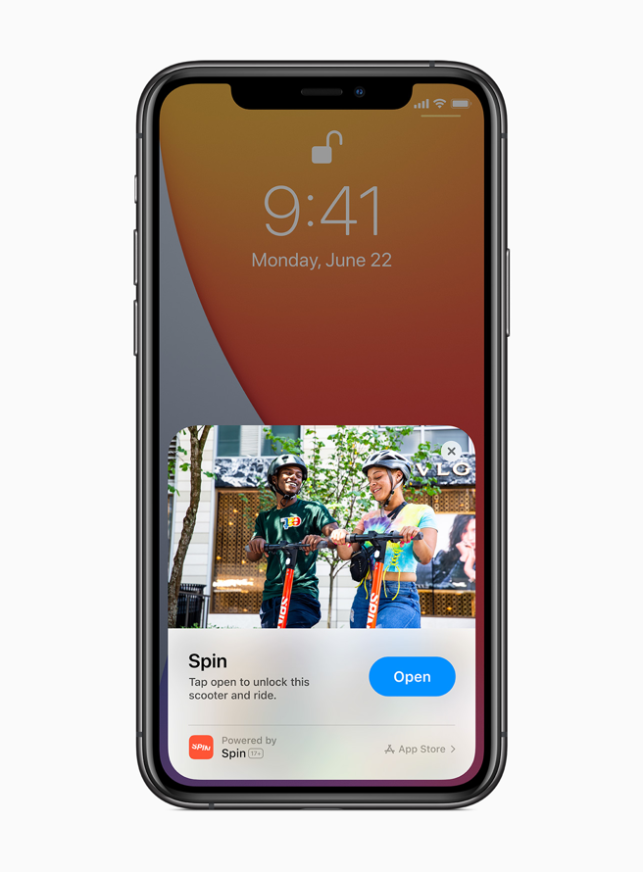 Thanks to that new App Library view, Apple allows users to now hide apps on their “main” home screen.

It looks pretty similar to Android’s app drawer, but with some additional smart grouping features — like automatically pulling out all your Apple Arcade games into one batch.

With the App Library, widgets, App Clips, and other iOS 14 features, Apple is giving the iPhone a much-need refresh in terms of its user interface.

The features will arrive with iOS 14, which launches publicly later this year.

WWDC was also more Memoji-centric than usual. The invitation art to the annual event featured the new Memoji and they were all over the intro during the conference.

According to the company, the Memoji messaging app has experienced a 40% year-over-year increase.

Doing so will alert the specific person you are responding to — a big upgrade for those who rely on Messages for keeping in touch with big groups.

Also, there are now 20 new hairstyles and more ages for Memojis, along with additional skin color choices, facial hair and makeup.

There are new Memoji stickers such as a hug sticker, a fist bump sticker and a blushing sticker.

And for the ongoing global pandemic, there are now face coverings Memojis, which is something we are going to be living with for a while. 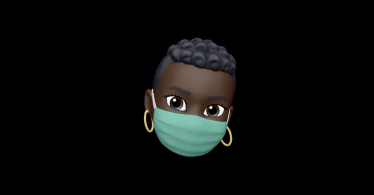 That follows other recent accessories additions for the avatars, including last year’s AirPods, glasses and hats. 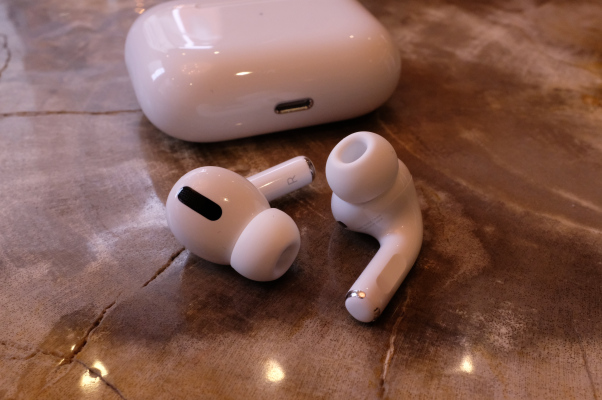 The addition of the feature gives audio a sense of locational awareness, with sound originating from different points.

The addition would be good for movies where sound location is part of the narrative story telling.

Apple is rumored to be working on an AR headset which would no doubt play nicely with head tracking earbuds.

Also of note on the AirPods front is the addition of automatic switching between devices.

That is a big bonus for people who use one set of headphones with different connected product.

With the new feature, both AirPods and AirPods Pro will automatically shift between iPhone and MacBook, as you perform different tasks.

Messages is getting a much-needed update to compete with WhatsApp, Telegram and other popular messaging apps. You can now pin conversations at the top to access them more easily. 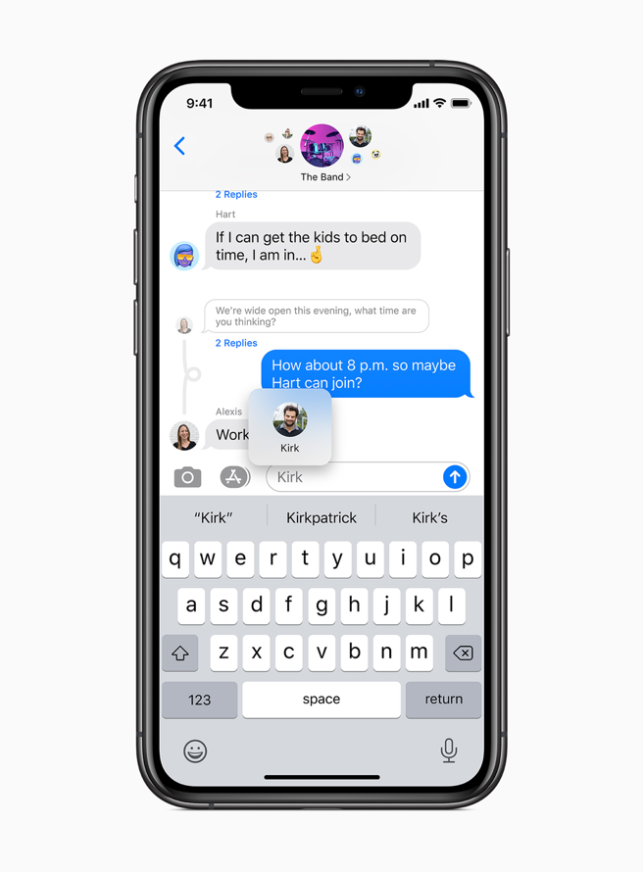 Conversations themselves are getting an upgrade as you can reply to individual messages.

You can then tap on the reply to see the conversation as a separate thread. People can mention you and you can filter your notifications to mentions only.

Each conversation is now more customizable. You can set a photo or an emoji for a conversation.

Apple also shows the icons of your contacts in a specific conversation. The most active people get a bigger icon.

Apple has also added new upgraded to its voice assistant, Siri. It will no longer take over the entire screen when you trigger it.

It will be a small bubble at the bottom of the screen, which does not obstruct the rest of the screen. Results appear at the top of the screen and appear like a notification.

You can now ask Siri to send audio messages using iMessage. And if you do not like audio messages, keyboard dictation has been improved. Your voice is now processed on device, which should help when it comes to speed.

Siri allows you translate words already, but Apple is going one step further by releasing a Translate app.

Like Google Translate, you can have a conversation in two different languages. You can translate from voice-to-text-to-voice. If you rotate your iPhone in landscape mode, each person has one side of the screen. 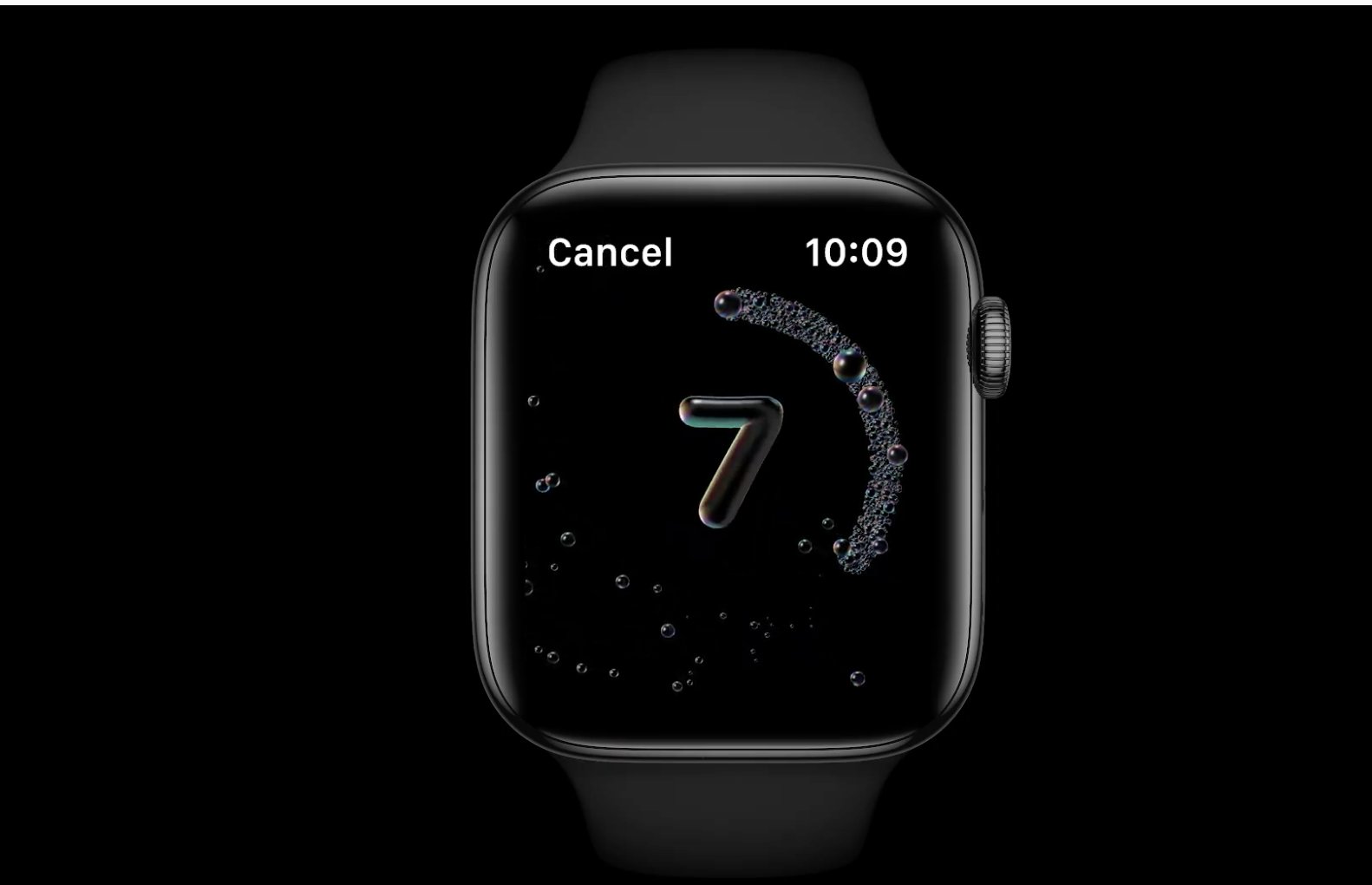 In a first-of-its-kind innovation for a wearable, Apple Watch automatically detects handwashing to initiate a 20-second countdown timer. If the wearer finishes early, they will be prompted to keep washing. 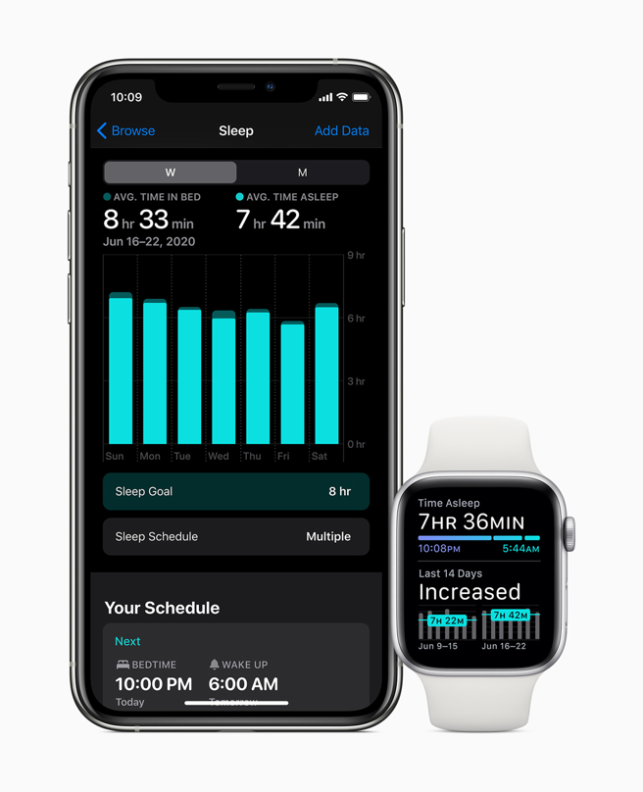 Apple Watch introduces sleep tracking, taking a holistic approach to sleep by providing valuable tools to help users get the desired amount of sleep, get to bed on time, and create a pre-bedtime routine to meet their sleep goals. 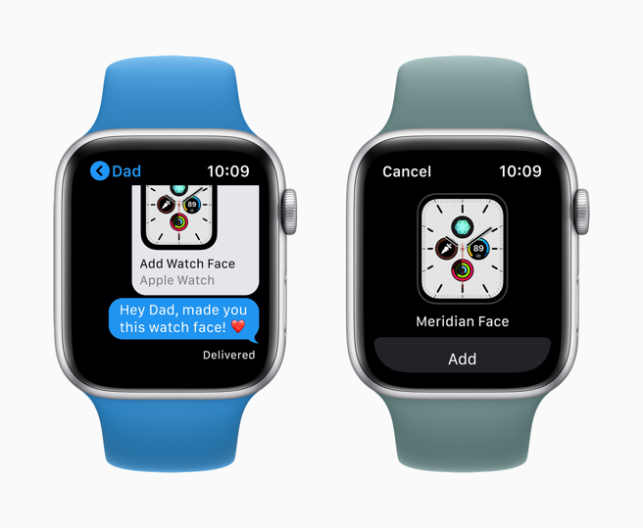 In watchOS 7, Apple Watch wearers can now share watch faces that are infinitely customizable and personalized, inclusive of complications, through Messages or Mail, and discovered through the App Store or even from links through websites and social media channels.