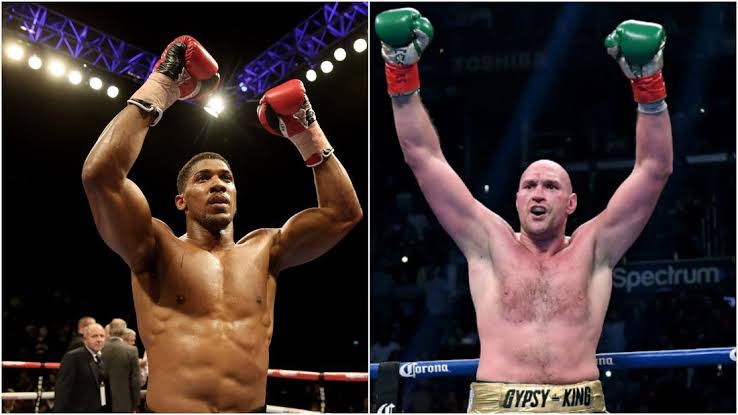 World heavyweight boxing champions Anthony Joshua and Tyson Fury have agreed to a two-fight deal, it emerged on Wednesday.

Joshua’s promoter Eddie Hearn who made this known to Sky Sports News said;

We are making great progress. There is still a lot to overcome. We are looking at venues and dates. It is fair to say [Joshua and Fury] are in agreement regarding the financial terms of the fight. The main positive news is that Joshua and Fury have agreed to a two-fight deal, in essence. The most difficult part of any deal is the financial element. I believe we are in a great place where both guys have agreed to what that should be.

Speculation about a blockbuster bout between the British pair has been steadily building since Fury dethroned Deontay Wilder to become WBC heavyweight champion in February and when Joshua, who is of Nigerian descent, regained his WBA, IBF and WBO titles by winning Andy Ruiz in their rematch last December.

Hearn revealed the fighters are in agreement regarding the financial terms of the fight and that their first bout will take place next year.

They have not signed contracts because there are still things to be worked out. We are pushing towards a place where they can be drafted, for 2021. Both guys are in agreement. The structure of the deal has been put forward, and agreed to by both parties.

We have been talking to MTK (Fury’s promoters), giving them the assurances from Joshua’s side that all the details on the structure of the deal is approved from our side. And it is from Fury’s side, as well.

According to Hearn, this will be the biggest fight ever in British boxing, stressing that;

There will never be a bigger fight in our generation. Two guys, very different, who fight differently, have experienced different things and have come back from adversity.

Joshua must however fight Bulgarian boxer Kubrat Pulev before the newly agreed bout. Tyson is also contracted to face American Deontay Wilder for a third fight in their series.

Fury confirmed this news in a video posted on Twitter.

It’s official FURY VS JOSUAR AGREED FOR NEXT YEAR, I got to smash @bronzebomber first then I’ll annihilate @anthonyfjoshua #WEARESPARTANS

MASSIVE THANKS TO DANIEL KINNERHAN FOR MAKING THIS HAPPEN.🙏🏻👍🏻 god bless pic.twitter.com/18FfVKfCax

Roger Federer Out Of Tennis Until 2021 After Knee Surgery
Dele Alli: Tottenham Midfielder Banned For One Match Over Coronavirus ‘Joke’