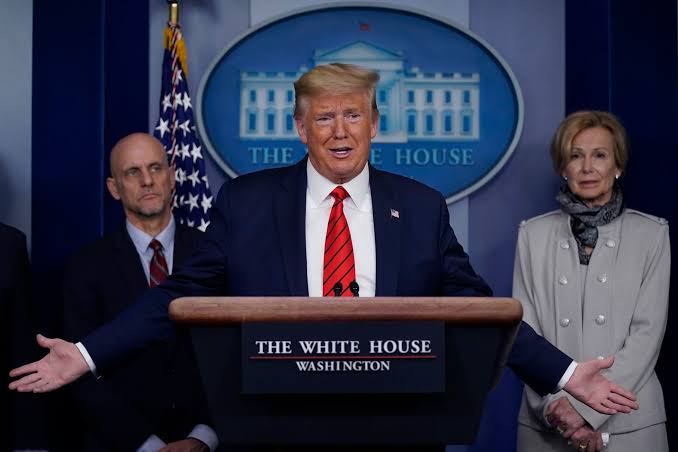 US president, Donald Trump, has reacted to a viral video of him abruptly ending a COVID-19 press briefing by walking out after an heated word exchange with a Chinese-American reporter, Weijia Jiang.

During the press briefing which took place on Monday, the journalist had asked President Trump why he constantly emphasized that the US is better than other countries in terms of its testing capacity for COVID-19 despite the rise in number of cases and deaths.

The President shot back at her saying;

They are losing lives everywhere. And maybe that’s a question you should ask China. Don’t ask me. Ask China that question.

Feeling offended at President Trump for attacking her Asian roots, Jiang then asked him; “Sir, why are you saying that to me, specifically?”

Trump, in return, told her that he would say that to “anyone who asks a nasty question”.

She quickly retorted stating that her first question about America’s testing capabilities  was not a nasty question.

Brushing off further comments from the reporter, Trump pointed at another reporter to speak but walked out of the press briefing when the reporter called upon didn’t ask any question immediately after being interjected by Jiang.

The video of this altercation between President Trump and the reporter went viral on Tuesday with many people around the world questioning the actions of the President.

In his reaction to the viral video, President Trump replied to a tweet showing the video, by writing;

The Lamestream Media is truly out of control. Look how they work (conspire!) together. They are the Enemy of the People, but don’t worry, we will WIN in November!

The Lamestream Media is truly out of control. Look how they work (conspire!) together. They are the Enemy of the People, but don’t worry, we will WIN in November! https://t.co/3YOSChXP9M

His reply caused another wave of backlash as people continue to question his leadership abilities especially since the outbreak of coronavirus in America.

Trump has been widely criticised for his response to the coronavirus crisis and shifting the blame on to China.

Many media commentators claim his reactions to the escalating health crisis has been confusing, incoherent and misleading.

Trump has continued to receive censure for his treatment of women, especially women of color. He has been tagged racist by many quarters as a result.