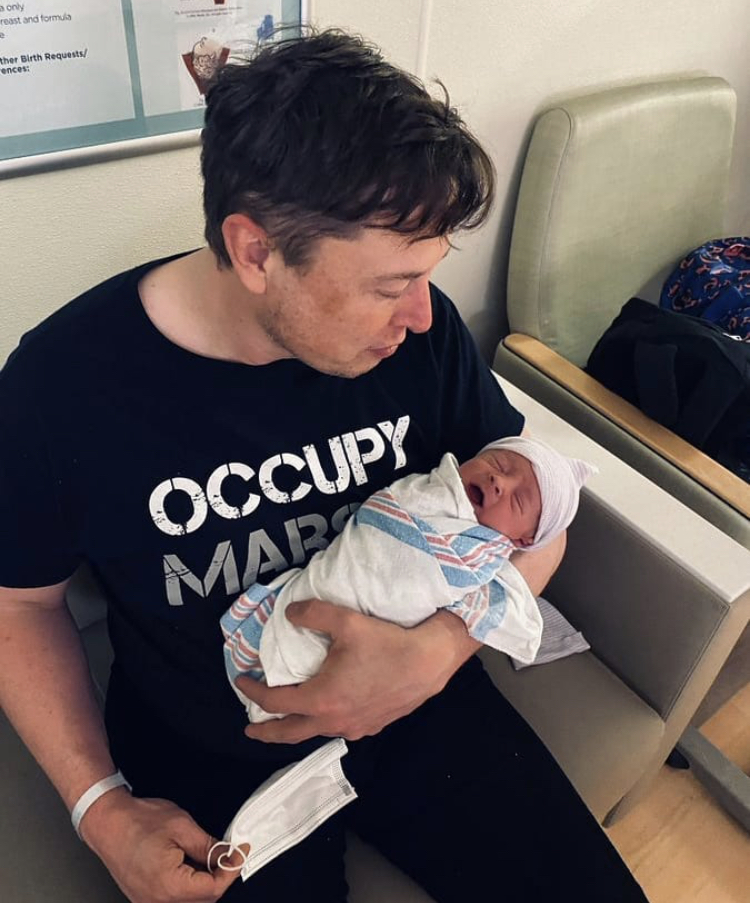 Tech entrepreneur and CEO of Tesla and SpaceX Elon Musk, whose girlfriend, Grimes gave birth to a baby boy on Monday, has revealed the name of their child as X Æ A-12 Musk.

Musk on Tuesday revealed the unique name of their newborn son after a fan asked if there was any update on the baby.

When asked about the baby’s name, Musk replied “X Æ A-12 Musk” and shared a photo of the baby with a filter that gave the newborn face tattoos saying; “Never too young for some ink haha”

This left many fans wondering and guessing what the name meant or how it would be pronounced, with funny memes being used to interpret the name.

Musk’s girlfriend, Grimes has now come out to explain the meaning behind each character of their son’s name in a Twitter post.

The Canadian musician, whose real name is Claire Elise Boucher, explained that  “X” stands for “the unknown variable.”

She went on to say “Æ” is the Elven spelling of AI, which is shorthand for artificial intelligence and translates to “love” in several languages, such as Japanese.

The 32-year-old star then shared that a part of her son’s name is a reference to the couple’s favorite aircraft.

A-12 = precursor to SR-17 (our favorite aircraft). No weapons, no defenses, just speed. Great in battle, but non-violent.

Grimes concluded the interpretation by revealing that the “A” in the name also represents “Archangel,” which she described as her favorite song.

•X, the unknown variable ⚔️
•Æ, my elven spelling of Ai (love &/or Artificial intelligence)
•A-12 = precursor to SR-17 (our favorite aircraft). No weapons, no defenses, just speed. Great in battle, but non-violent 🤍
+
(A=Archangel, my favorite song)
(⚔️🐁 metal rat)

The mother of X Æ A-12 Musk did not inform fans how to actually pronounce it but reports say this name may not be legally accepted in California, U.S where she likely gave birth. This is because some certain names cannot be registered in the state.

The rules for registering a birth stipulates that no pictographs, ideograms and diacritical marks like è, ñ, ē, ç can be used.

X Æ A-12 is the couple’s first child together since they started dating in May, 2018.

Grimes confirmed her pregnancy in January when she posted on Instagram the difficulties involved in being pregnant and working.

I feel like I was woefully ill prepared [because] I [don’t know] if pregnancy is as visible or discussed as it should be.

I just didn’t [really] understand what I was getting into. It’s been good too, but it makes working a lot harder. Good at writing and having lots of wild ideas [though], but anything physical is hard. I’m also way more emo and less capable of bravery in the face of haters online and stuff haha.

However Musk, 48, has five other children — twins Griffin and Xavier and triplets Damian, Saxon, and Kai — from a previous marriage.

“No Medication Has Been Confirmed Effective, Licenced For COVID-19” – Says PTF Coordinator