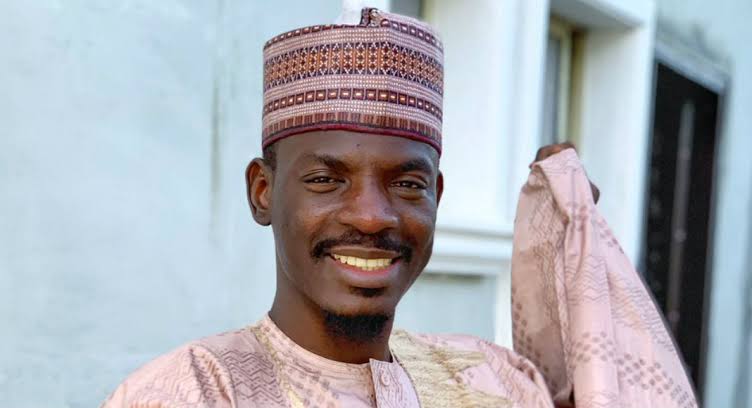 Following social media attack, Bashir Ahmad, Personal Assistant on New Media to President Buhari, have recanted his statement saying he would intervene in changing the conviction of a child trafficker and rapist, Yinusa Dahiru (Yellow).

On May 22nd, Yunusa Dahiru (Yellow) was sentenced by the Federal High Court in Yenagoa, Bayelsa State to 26 years imprisonment for child trafficking and sexual exploitation of Ese Oruru who he abducted from Bayelsa in 2015 as a 13-year-old.

A Twitter user @Al_ansariy_ requested that Bashir intervene in upturning the conviction of Dahiru by the court, tweeting;

Please Bashir, do something about Yunusa Yellow for Allah’s sake, he is wrongly accused and sentenced, the whole matter is manipulated, we need to appeal for him.

Bashir responded by assuring the Twitter user that he would make effort to upturn the conviction by the court, tweeting;

My brother, I do not have the power to do anything against the judgment of the court, but I will try to contact those whom I think are capable. 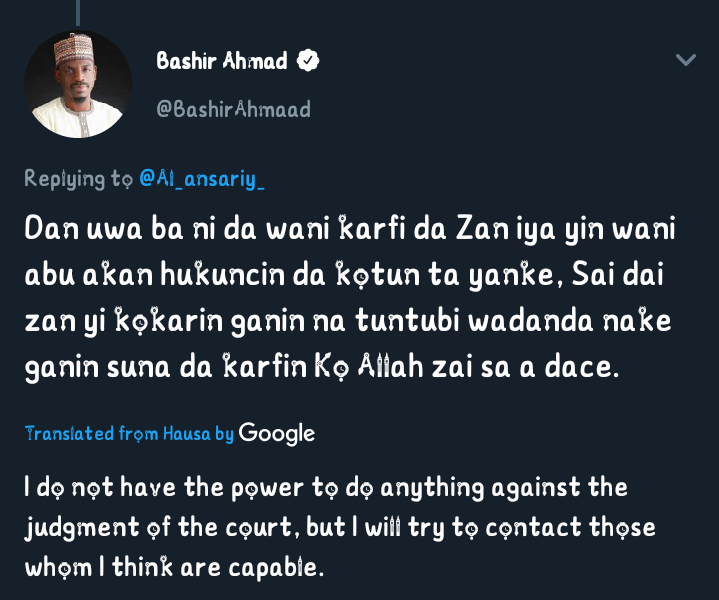 After his comments generated public backlash, Bashir claimed he commented on the matter without knowing or understanding the details.

I commented on the Yunusa Yellow saga earlier, without knowing and understanding the details of the case. Eloping or rather, kidnapping a minor and forcing her to marry you shouldn’t be taken lightly. A condemnable act! 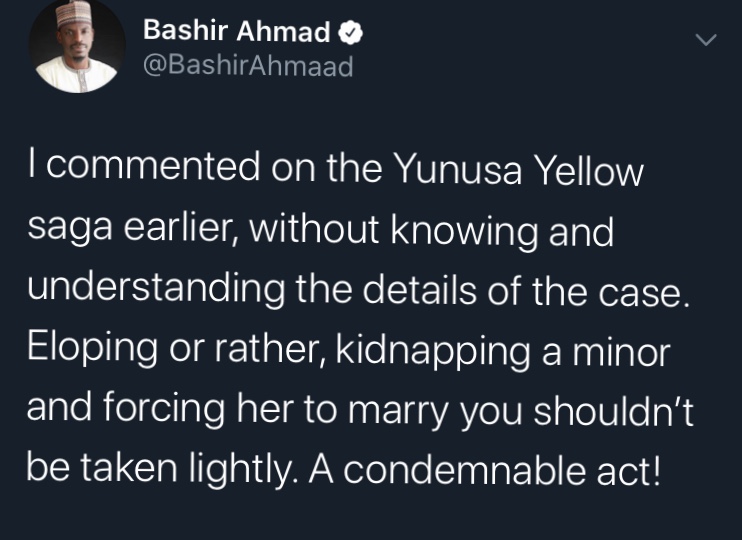 See some reactions from Nigerians below;

It’s not material whether Bashir knew about the nature of the case or not. What’s material to me, is the fact that he outrightly hinted to us, the manipulation and influence over judicial decision by powerful politicians.
This is our democracy out the window and in the thrash.

If young Bashir Ahmad (20+) confessed that he has access to people who are capable of influencing the judgement of a competent court, we can now see how easy it was for this regime to steal our 2019 mandate at the ballot and also influence the Supreme Court to keep it.

PA to the president and you’re commenting on things you have no idea about…with your official handle?
So if we’re discussing on how to sell Buhari, you’ll put mouth inside the gist and inadvertently expose your oga.

Does Bashir think we were all born yesterday?

One of the biggest supporters of Waspaping on Twitter is Ahmad Bashir, President Buhari’s aide. You know who Waspaping is on Twitter.

I can tell you for free that Ahmad Bashir knows everything about the Yunusa Yellow case and that is why he chose to chose to reply in Hausa.

He knew what he was doing..

He did not expect a caught because he was dumb enough to think we don’t understand Hausa..

He has said worse, and he will say worse..

Bashir is a reminder that the effect of Buhari’s lawlessness will not only destroy institutions, but it has also affected a younger generation of politicians who now believe that anything goes, and judgement can be influenced.
There are many Bashirs in this regime.

A senator is one of the powerful people fighting for the release of Yunusa, the guy who abducted and raped a 13 yes old minor.

How do you think Yunusa (a keke rider) could afford to fly airplanes to and fro his court appearances? Ahmad Bashir reply is in line with the agenda.

Aide to the President, Federal Republic of Nigeria @BashirAhmaad promises to interfere with a court judgment that sentenced a rapist, pedophile, and kidnapper to prison.