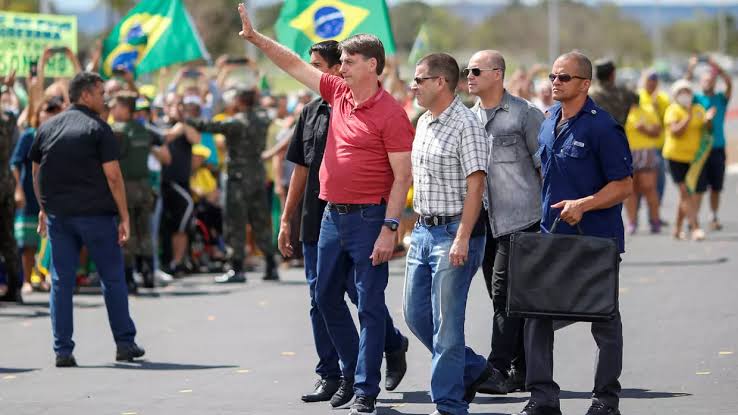 Brazil’s President Jair Bolsonaro gestures after joining his supporters, who were taking part in a motorcade to protest against quarantine and social distancing measures, amid the coronavirus disease (COVID-19) outbreak, in Brasilia, Brazil April 19, 2020. © REUTERS/Ueslei Marcelino

World Health Organization (WHO) has declared South America as the new epicentre of the global Covid-19 pandemic due to explosion of cases in Rio de Janeiro and São Paulo.

Mike Ryan, executive director of the WHO’s emergencies program, revealed this at a news briefing from the agency’s Geneva headquarters on Friday.

We’ve seen many South American countries with increasing numbers of cases and clearly there’s a concern across many of those countries, but certainly the most affected is Brazil at this point. In a sense, South America has become a new epicentre for the disease.

Brazil has more cases than any other country in South America, according to the WHO’s most recent daily situation report.

Ryan added that confirmed cases in the country are more than 300,000 – the third highest in the world – and the virus has killed over 20,000 people.

The Director noted that the government of Brazil has approved the “broader” use of anti-malaria drug hydroxychloroquine, which U.S. President Trump recently said he is currently taking to protect against infection from Covid-19.

Several studies have however cast doubt on the efficacy of the drug as a treatment for the disease.

Read Also: Trump Reveals He’s Taking Hydroxychloroquine To Protect Himself Against COVID-19 Despite Warnings Of Fatal Side Effects

Ryan stressed that majority of cases in Brazil are in the Sao Paulo region and the states of Rio de Janeiro, Ceara, Amazonas and Pernambuco have been affected as well.

He said the WHO is actively providing assistance to the government of Brazil.

The increase in coronavirus cases have been rising sharply in many Latin American countries, causing increasing concern to regional health authorities.

Other countries in the region, including Mexico, Chile and Peru, are also struggling to contain major outbreaks.

The first confirmed case in Latin America was identified in Brazil on 26 February, although researchers have said there are indications that the virus had been in circulation as early as January.

Read Also: New Study Shows Coronavirus Was In Brazil Weeks Before It Was Detected

Latin America’s two most populous nations, Mexico and Brazil, have seen the highest number of deaths, more than 6,000 and 20,000 respectively.

And researchers say both could be significantly under-reporting deaths, with many cases going undiagnosed.

Mexico and Brazil have continued to take less severe lockdown measures than other Latin American countries. Both have given out guidelines, but have not imposed national restrictions.

This violation of restrictions in Brazil comes as President Jair Bolsonaro continuously downplay the dangers of the virus.

In April 19, the President joined his supporters, who were protesting against quarantine and social distancing measures to check the spread of the virus.

The response in Brazil is far from ideal, and currently there is a lack of a uniform message coming from the leadership at different levels.

Other countries such as Argentina have imposed compulsory lockdowns. Peru has had one of the first and strictest national lockdowns in the region, but continues to see cases and deaths rise.

Also, as cases rapidly rise in Chile, the government has announced a mandatory lockdown in the capital Santiago.

Meanwhile, Chile has one of Latin America’s highest rates of testing – 21 tests per 1,000 people. But testing across the region is significantly below other parts of the world.

Brazil also has a low testing rate, and a study by the University of São Paulo Medical School estimates the number of infections could be about 15 times higher than the official figure in the country.

Despite the increasing infections, President Bolsonaro of Brazil wants to begin reopening Brazil’s borders, but other Latin American governments have expressed worries that the worsening situation could have dreadful consequences across the region.