The Government of Mexico has returned an Ile-Ife bronze sculpture to Nigeria after it seized by customs agents at Mexico City airport for being illegally imported into the country.

The sculpture, from the 6th century southwestern Yoruba city of Ife, shows a man wearing woven pants and a hat, sitting with his legs crossed, holding an instrument.

This was contained in a press statement obtained on Mexico’s website on February 26. The statement said the origin of the sculpture was authenticated by experts.

The customs agency of Mexico’s Tax Administration Service, in coordination with the Ministries of Foreign Affairs and Culture, returned a bronze Ife sculpture of the Yoruba people to Nigeria.

The sculpture was discovered by customs officials at the Mexico City International Airport when the buyer tried to get it into the country. 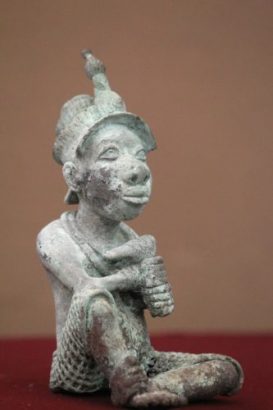 The statement noted that returning the sculpture to Nigeria was part of Mexico’s commitment to protecting cultural heritage.

The sculpture and its provenance were authenticated by experts and agencies of both countries, with the participation of specialists from the National Institute of Anthropology and History. It had been exported illegally.

Mexico strongly opposes illicit trafficking in cultural property. By returning it to Nigeria, the government shows its commitment to protecting cultural heritage. International monitoring and cooperation are essential for complying with current laws, including the 1970 UNESCO Convention.

The head of Specialists from the National Institute of Anthropology and History, Diego Prieto told newsmen that;

It determined that it was a piece of Yoruba origin. A beautiful bronze piece, and that being of Nigerian heritage, it should return to its home.

Nigerian Ambassador Aminu Iyawa acknowledged the work of the Mexican authorities in recovering the sculpture.

Google And Flutterwave To Train 5000 SMEs Across Nigeria

Just In: Chinese Tests Negative To Coronavirus In Lagos

Famous Mexican TV Host On The Run After Allegedly Embezzling…