Benedict, who promised after his resignation not to interfere with the work of his successor, has defended clerical celibacy in an explosive book ‘From the Depths of our Hearts: Priesthood, Celibacy and the Crisis of the Catholic Church’.

The former Pope in the book co-authored by Cardinal Robert Sarah, said he ‘cannot remain silent’.

The book which will be released in France on Wednesday, urged the Catholic church not to be swayed by “bad pleas, theatrics, diabolical lies and fashionable errors that want to devalue priestly celibacy”. 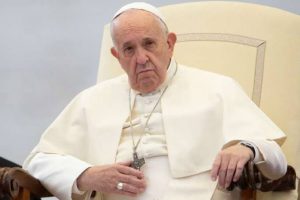 Pope Francis had agreed in October to consider a request from bishops in the Amazon to allow married men to become ordained in order to overcome a shortage of clerics in remote areas of the region.

The authors explained it was urgent that bishops, priests and laity “let themselves be guided once more by faith as they look upon the church and on priestly celibacy that protects her mystery”.

Benedict, had severally gone against his promise of not interfering on various issues over the past seven years, however, this is the first time he has intervened on a matter that the more liberal Pope Francis is actively considering.

A document approved by bishops in the Amazon noted that people of Catholic faith in the region have “enormous difficulties” in receiving communion and seeing a priest.

It proposed to “ordain priests suitable and esteemed men of the community”, who had already had “fruitful” experiences as deacons.

Pope Francis said he would publish his decision on the ordination of married men later this year.

According to him, if the move is approved, it would be limited to the Amazon region and would only apply to men already serving as deacons.

The proposal is seen by many as setting a precedent that could bring an end to the restriction on married Catholic priests worldwide.