A man, Abdool Moh becomes the first student to graduate with a first class degree from the department of Political Science in Ahmadu Bello Univeristy in over 50 years.

Abdool who posted this on twitter with his handle @abdool_moh, appreciated God for finally completing his studies at ABU and also graduating with a first class degree honors. 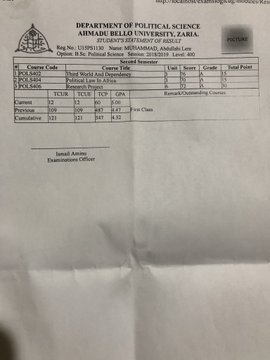 He added that, his achievement made him break a record, to become the the first student to obtain a 1st class degree in Political Science in Ahmadu Bello University after over 50 years

Glory be to God Almighty, My four year journey in ABU Zaria ends with a https://t.co/11dqYPsfnv. Political Science (first class honours). Also, the first to obtain a 1st class in Political Science in Ahmadu Bello University in over 50years.
Record Broken, Alhamdulillah!!!👨🏽‍🎓🙇🏻‍♂️ pic.twitter.com/CEcRBQHuwZ

However, as he is being celebrated, other Twitter users have come out to refute his claim of breaking a 50 years old record.

Have you forgotten about “The Late Last Political Guru” he was the last person to graduate with a First Class in political science in ABU ZARIA in the last 30years. Please find out about him. More reasons why he was nick named “THE LAST POLITICAL GURU”

Malam Ibrahim Mu’azzam who is currently teaching at BUK, Kano dep’t of pol sc graduated with first class in late 70s, it’s not up to 50 yrs gentleman. Once again, congrats

A University Rejected My Application Due To My Disability…

Court Sentences ABU Staff, Daughter To 7 Years In Prison For…