As Nigeria marks the Armed Forces Remembrance Day today, January 15, families of soldiers who died while fighting the Boko Haram insurgency and other security challenges across the country are crying for help.

Some widows and relations of troops who lost their lives are lamenting about the difficulties they face to survive following the death of their breadwinners.

Sylverna Alawade, widow and mother of a 4-year-old daughter said her husband, Lance Corporal Shefiu Alawade, was declared ‘missing in action’ at Metele in Northern Borno in May 2019 and was later confirmed dead in battle.

When he was leaving us for the front line, he left his ATM card with us to be withdrawing money. Unknown to us, he was bidding us final farewell. However, when we did not see or hear from him a month after, I suddenly remembered that Metele had been attacked, and he could have been a victim. My fears were later confirmed,” she said.

She, however, lamented that her late husband’s entitlements have not been paid yet a year after his death.

However, in the case of another widow, Ogechukwu Waziri is quite different.

Ogechukwu said her husband, Staff Sgt. Ibrahim Waziri, was killed in combat with Boko Haram at Damboa in southern Borno on October 29, 2016.

The mother of three said:

It has not been easy with us since we lost him but by the special grace of God, we have been managing. Only his gratuity has been paid which is what I have been using to do some business for the sustenance of the family. The military is sponsoring the education of the children. It has been very difficult living without my husband but we are managing.

Lance Cpl Oluwafunmilayo Ogunubi is the widow of Cpl Idowu Emmanuel who died during the battle with insurgents at New Marte in northern Borno on January 8, 2017.

Funmilayo, who acknowledged that some of her late husband’s benefits have been paid, called on relevant authorities to do more.

The Chairman, Senate Committee on Army, Senator Ali Ndume, said losing a soldier is like losing Nigeria, noting that it is not the number of lives lost that matter. 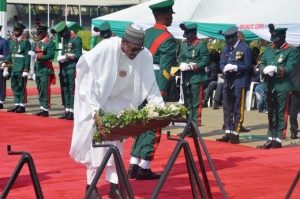 Speaking in a telephone interview, Senator Ndume noted that he could not tell the number of soldiers that died within the year, adding that the sacrifice made by soldiers to fight the war is huge.

He revealed that between between 2013 and October 2019, 840 Nigerian soldiers were killed by Boko Haram terrorists and many of the fallen soldiers were buried at the military cemetery in Maiduguri, Borno State

The Armed Forces Day is observed annually by nations around the world to honour their military forces.

In Nigeria, it is marked on January 15 to honor members of the Nigerian Armed Forces who fought in the first and second world wars and those who served or are still serving in various peace support operations worldwide.

The day is also marked to appreciate those who fought in the Nigerian Civil War. The event is usually commemorated with an interdenominational service held across the federal, state and local levels in Nigeria.