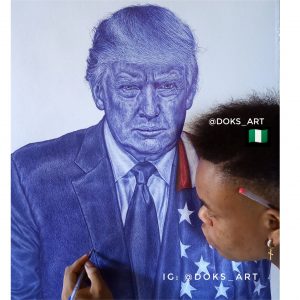 President of the United states Donald J. Trump has commended Nigerian Oyedele Isaac, a ballpoint artist, for his remarkable effort in drawing a portrait of him purely out of a blue and red pen.

The young Nigerian who had drawn Trump two times in the past took to micro blogging social networking site Twitter to share the “24 x 21” portrait which, according to him took 70 hours to complete. He had also urged Twitter users to share until Trump gets to see it.

Trump remarkably then replied to the tweet acknowledging it. In his reply, he wrote that not only did he see the artwork but that he also thought it to be “fantastic.”  He called Oyedele a wonderful artist, and encouraged him never to give up on his dream.

“Not only did I see it. I think it is fantastic. You are a wonderful artist, never give up your dream!,” Trump wrote while retweeting the photo.

Not only did I see it @Doks_Art, I think it is fantastic. You are a wonderful artist, never give up your dream! https://t.co/LVVCUJz5CW

Continue Reading
You may also like...
Related Topics:Donald Trump