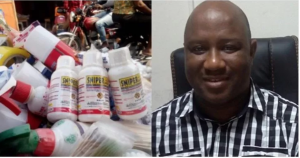 UNILAG senior lecturer and Foursquare, Dr. Boniface Igbeneghu, who was recently exposed in a BBC ‘sex for grade’ documentary has attempted suicide.

Dr Boniface was caught on tape by the BBC Africa Eye soliciting intimacy from an undercover journalist who posed as a 17-year-old minor seeking admission in the school.

His church and the University of Lagos have suspended him over the allegation.

A close family friend has now confirmed that the lecturer was admitted to the hospital after he drank rat poison in an attempt to kill himself.

In the late hours of Monday evening, Dr. Boniface was found on the floor unconscious with bubbles in his mouth, he was then rushed to Reddington Hospital the family friend revealed.

Reacting to the incident before he attempted suicide, Boniface told PUNCH,
“I work for the University of Lagos; if you want any reaction, talk to the university.”“Contact the information unit and they will tell you the correct position.“If I talk, I will be running foul of the varsity law. Don’t put unnecessary pressure on me to say beyond what I have said.”
Continue Reading
You may also like...
Related Topics:sexforgrades

No Evidence Of SexForGrades Against Our Lecturers In BBC video -Ghana University
President Buhari Presents Budget For 2020, Based On New 7.5% VAT (Photos)