With effect from August 29, Comptroller-General of Nigeria Immigration Service Muhammad Babandede ought to have decreased Nigeria’s visa charges to United States citizens so that Nigerians will not have to pay more for American visa, but as The Nation found out yesterday, visa applicants in U.S. visa centres in Lagos and Abuja still pay acceptance fees.

IT looked like a proactive action. A day after the American government announced that Nigerians applying for tourism, student, media and business visas to the United States will have to pay issuance fees, Minister of Interior Rauf Aregbesola ordered Comptroller-General of Nigeria Immigration Service Muhammad Babandede ought to have decreased Nigeria’s visa charges to United States to move against it. But about two months later, Nigerians are yet to benefit from the minister’s action.

Aregbesola, in a statement by the ministry’ spokesman, Mohammed Manga, said a committee set up to conduct due diligence in line with the ministry’s extant policy on reciprocity of visa fees had earlier engaged with the US embassy on the issue, adding that the implementation of its recommendations was delayed due to “transition processes in the ministry at the policy level.”

It said: “The committee had concluded its assignment and submitted a report, but the issuance of authorisation for its recommendations was delayed due to transition processes in the ministry at the policy level.

“The Minister of Interior, Ogbeni Rauf Aregbesola, has approved the decrease of visa charges payable by US citizens in line with reciprocity policy as recommended by the committee.

“Accordingly, the Comptroller-General of Nigeria Immigration Service, Muhammad Babandede, has been directed to implement the decrease in Nigeria’s visa charges to US Citizens with effect from August 29, 2019.”

The American government’s reaction to the ministry’s statement was that it would study the situation and would only stop the acceptance fess after seeing assurance that Americans seeking to come to Nigeria were not paying more.

The new fees introduced by the U.S. are aside from the $160 or N59, 200 processing cash for all visa categories.

The embassy adopts the rate of N370 per $1 for Nigerians. The official rate is about N360 to a dollar.

Now, for a tourist visa, an extra $110 or N40, 700 is paid after the visa has been issued to the applicant. Applicants, whose applications are denied, will not need to pay the extra $110.

Applicants seeking the work permit otherwise known as L1 Visa now pay an extra N112, 100 if given visas while those applying for dependency/spousal visa (H4 visa)  pay an extra N66, 600.

The embassy’s statement added that the increment was done based on reciprocity, which means when a foreign government imposes additional visa fees on U.S. citizens, the United States imposes reciprocal fees on citizens of that country for similar types of visas. 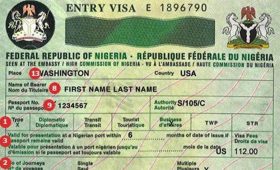 The embassy blamed the Federal Government for the reciprocity fees for refusing to remove the additional cost imposed on Americans.

“U.S. law requires U.S. visa fees and validity periods to be based on the treatment afforded to U.S. citizens by foreign governments, insofar as possible. Visa issuance fees are implemented under the principle of reciprocity: when a foreign government imposes additional visa fees on U.S. citizens, the United States will impose reciprocal fees on citizens of that country for similar types of visas. Nationals of a number of countries worldwide are currently required to pay this type of fee after their nonimmigrant visa application is approved.

The embassy had in May suspended its dropbox visa renewal programme for Nigerians with travel history to the United States.

The statement suspending the programme reads: “Effective at the close of business today, Tuesday, May 14, 2019, the US Mission to Nigeria is indefinitely suspending interview waivers for renewals, otherwise known as the ‘Dropbox’ process.

“Visa applications will no longer be accepted by DHL in Nigeria. Those who have already submitted their passports via Dropbox to DHL for processing either at the US Embassy in Abuja or the Consulate General in Lagos, will not be impacted by this change.

“All applicants in Nigeria seeking a non-immigrant visa to the United States must apply online and will be required to appear in person at the US Embassy in Abuja or US Consulate General in Lagos to submit their application for review. Applicants must appear at the location they specified when applying for the visa renewal.

“Processing of diplomatic and official (A, G, and NATO class) visa applications will continue unchanged.”

It added its processing procedures are regularly reviewed to “assess our ability to quickly, efficiently, and securely process visa applications”.

Nigerians are certainly looking forward to the two governments sorting out their differences for a quick return to the old fees regime.

What Nigeria charges other nationals

Continue Reading
You may also like...
Related Topics:US VISA